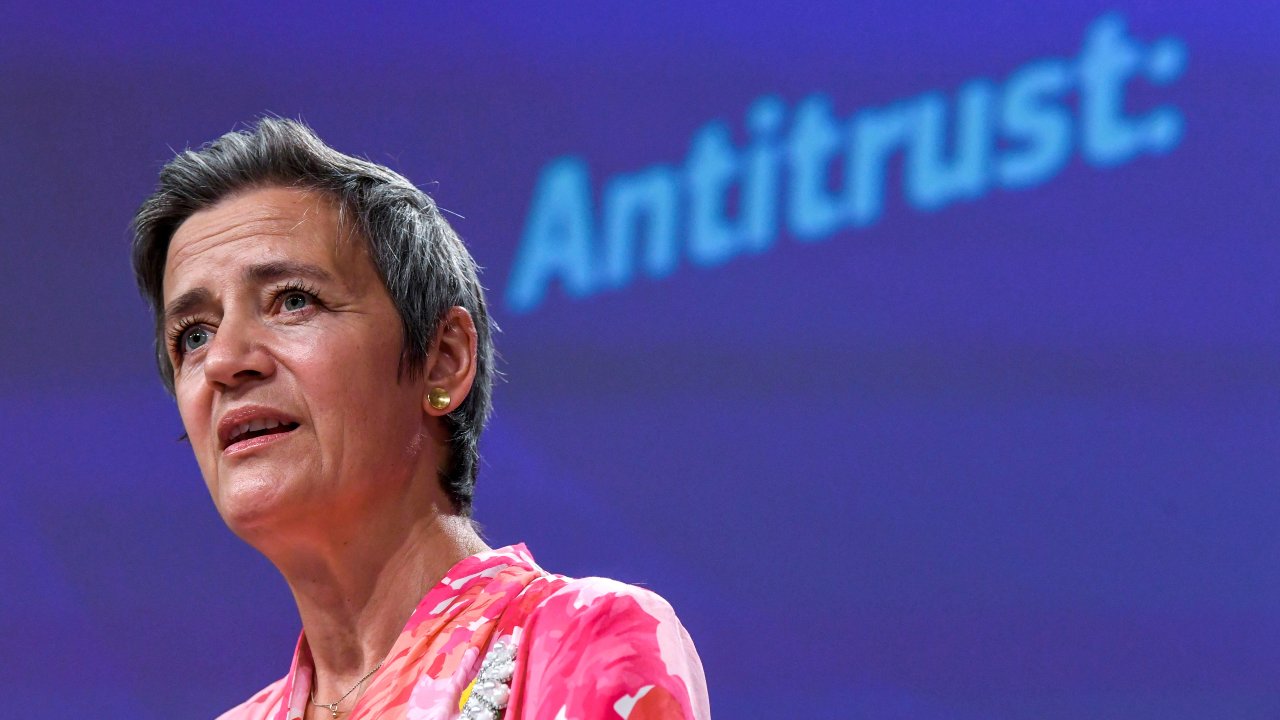 European Commissioner for Europe fit for the Digital Age Margrethe Vestager speaks during a news conference on a competition sector inquiry at the EU headquarters in Brussels, Belgium June 9, 2021. John Thys/Pool via REUTERS

In a quest to cut “big tech” down to size, progressives in the United States want to copy Europe’s proposed Digital Markets Act (DMA). A sweeping antitrust package now under consideration in the U.S. House mimics Europe’s antitrust ideas.

Europe’s DMA will impose a raft of onerous obligations on superstar firms in order to favor their digital competitors at the expense of innovation. Instead of adopting an EU-inspired antitrust framework, U.S. policymakers should press Brussels to limit their proposal’s worst and most discriminatory aspects.

Both the European and American plans would create a two-level playing field: Competition would be regulated differently depending on whether or not companies are part of a narrowly defined category, dubbed “gatekeepers” in Europe and “critical trading partners” in the U.S..

Although size thresholds are different, both proposed antitrust reforms aim to curtail bigness: Large tech platforms like Google, Amazon, Facebook, and Apple will be subject to obligations that do not apply to smaller companies, even if these rivals have significant market share in their particular market. For instance, the DMA will regulate Apple Music while exempting Swedish rival Spotify – even though Spotify enjoys market shares almost double as those of Apple Music.

While the DMA and the House bills aim to achieve “fair competition,” they would create unfair competition. Arbitrary lines will be drawn between classes of competitors subject to different regulatory obligations. Google’s or Amazon’s cloud services would face restrictions, for example, while their French competitor OVHcloud remains free from regulatory scrutiny – even though OVHcloud is expected to go public this year with a multi-billion market valuation.

Competitors will be able to free-ride on large platforms’ crucial assets. Such two-level regulatory rules built on size thresholds run counter to both EU and U.S. antitrust principles which have long focused on preventing anticompetitive conduct under a consistent across-the-board regulatory framework.

Europe’s DMA approach upends U.S. antitrust tradition. It lays down myriad obligations without allowing firms to bring efficiency or innovation defenses to demonstrate that their conduct is pro-competitive. Innovative companies in dynamic markets will be regulated with a precautionary approach that impose stringent obligations irrespective of whether or not consumer harm ever materializes. These future-looking ex-ante rules collide with the traditional ex-post antitrust enforcement liability system, whereby agencies and courts redress harms once they occurred.

Both the DMA and the House bills prioritize regulation over innovation, prohibiting practices that can generate innovations. Under the DMA, gatekeepers will be prevented from offering better and cheaper products than currently on offer.  Every improvement or innovation by Apple could conveniently be labelled as “Sherlocking” by rivals – precluding it from introducing new features which benefit consumers.

With its goal to avoid conflicts of interest by platforms, the DMA offers considerable opportunities for rivals to block any innovation or improvement considered as competing unfairly. Zoom could preclude Apple from improving FaceTime.  The The DMA’s unintended consequences loom large.

By instilling a risk-averse attitude toward dynamic markets, the DMA favors precaution over innovation – at the expense of consumers. Instead of promoting competition, the new antitrust rules could limit it. Any change of algorithm by a large platform will be systematically prosecuted according to a nebulous concept of search results discrimination that requires no demotion of rivals. Rivals will strive, through regulatory and judicial rent-seeking, to alter the large platforms’ algorithms in a way that directly benefits them, not necessarily the algorithms’ inventors, let alone consumers.

Normally, U.S. policymakers would resist foreign regulation that targets U.S. companies and costs American jobs, as the DMA would. However, the growing populist “techlash,” mostly led by progressives, has weakened that response.

The potential geopolitical consequences could be enormous. European and American antitrust reforms will make it easier for Chinese tech companies who don’t face similar constraints.  One can only hope that the Biden administration comes to recognize the anti-U.S. underpinnings of the European proposal.

As part of the new U.S.-EU Joint Technology Competition Policy Dialogue, it should make clear to Brussels that such anti-U.S. provisions are unacceptable. Unfortunately, the issue of tech antitrust regulation is not on the Dialogue‘s announced agenda. That omission should be corrected – and wiser heads in the Senate should reject the House’s anti-innovation, European-inspired legislative package and instead adopt sensible antitrust reforms consistent with American values of economic growth, consumer welfare, and innovation.