Putin’s Truth-Twisters and Non-War in Ukraine

Russia’s use of violence against Ukrainian civilians is worsening, something distorted by ever-more cynical propaganda. 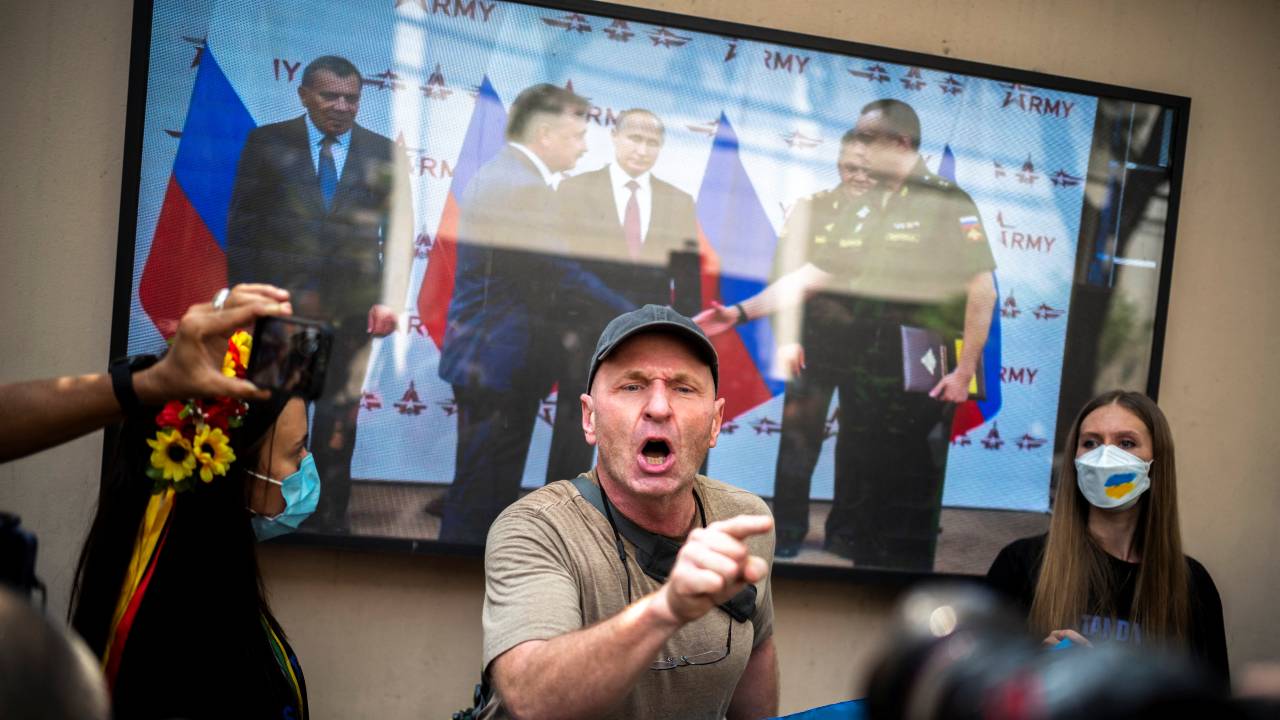 Photo: Ukrainians living in Bangkok and their supporters speak in front of a TV screen showing a video presentation of Russian President Vladimir Putin as they take part in an anti-war protest during Russia's invasion of Ukraine, outside the Russian embassy in Bangkok, Thailand March 1, 2022. Credit: REUTERS/Athit Perawongmetha.

Vladimir Putin’s war against Ukraine, which almost from day one was a war against (mostly Russian-speaking) civilians, is becoming increasingly monstrous. Late last week, Ukrainian military experts reported that Russian troops had again used banned phosphorus weapons in an attack on the front line near Avdiivka, in the country’s east, noting that their use has become systematic. Murders and rapes of local residents are being reported at an ever-increasing rate. Cities and towns are reduced to rubble by artillery barrages in what Russians cannot, by law, describe as war.

What Russians actually hear about the war is of course another matter. With just about every independent news outlet now closed (the award-winning Novaya Gazeta shut down for the duration of the war on March 28), there are very few alternatives to the Kremlin’s propaganda outlets.

In the first week of the war, Russian TV channels concealed the destruction of residential buildings and civilian infrastructure, as well as the number of dead civilians. Now, on the contrary, they actively display them. Yet the destruction is blamed on the actions of “Ukrainian nationalists.” According to propagandists, it was the Ukrainians who organized the blockade of Mariupol, used residents as “human shields”, and before retreating, tried to wipe the city from the face of the earth, causing the maximum possible destruction.

In this upside-down universe, the conquest of Ukrainian cities by foreign invaders are acts of liberation, part of a storyline that constantly draws parallels between Putin’s war of aggression and the liberation of Ukraine from German troops during World War II. Thus the Russians also stubbornly refer to their opponents as “fascists.”

The natural consequence of this propaganda is the ultimate dehumanization of the enemy in the eyes of the domestic audience. Russian officers give interviews declaring that they are “fighting non-humans”, which are “some kind of quintessence of fascism [and] inhumanity.” Western countries are described in similar ways.

For example, the former spy Andrei Bezrukov, argues that those who fight against Russia in Ukraine are “thugs who are the most radical, dirty, most misanthropic part of society, fed by financial oligarchs.” According to him, “they perform these destructive tasks of destroying everyone else in the name of preserving their money and their influence.”

Repeatedly appearing on Russian TV shows, Bezrukov calls Ukraine nothing more than a “chained dog of fascism,” and argues that the conflict must therefore be prosecuted with greater vigor. Seen as a whole, the propaganda machine has reached an extraordinary degree of cynicism, using illustrations of its own crimes to justify new crimes.

Similar material is circulated in schools. Recently, a media “agency” published a study of history textbooks produced in recent years. According to the researchers, they contain the justifications for Stalin’s repression and the Molotov-Ribbentrop pact, which led to the division of Poland and the beginning of World War II. The textbooks also praise Vladimir Putin, discredit his opponents, and promote the main narratives of Russian propaganda against the US, NATO, and “Ukrainian nationalists.” School textbooks justify the annexation of Crimea and echo propaganda about “bloody repression” against the inhabitants of Eastern Ukraine.

At the same time, Russian authorities clearly consider ideologically reliable textbooks insufficient to motivate students, and therefore, after the start of the full-scale invasion, they ordered school administrators to conduct mandatory talks on this topic in much the same style as Soviet “political information” lessons. As journalists discovered, special manuals were sent to teachers, explaining how exactly they should talk about the war. The texts repeat word for word statements by official propagandists.

As the Dossier investigative center found out, such manuals are also being developed for officials, public figures, and pro-Kremlin bloggers. They explain in detail how information about the “special operation” should be presented, which photos and videos to use, and what to focus on. In particular, the authors of the manuals propose using the thesis that “Ukraine was preparing to attack Donbas”, and that its population “was used for psychological experiments by the Americans as guinea pigs” to justify the war.

Pro-Kremlin media produce highly colored versions of events: the newspaper Vzglyad for example, reported that in the “first phase of the operation” in Ukraine, air superiority was achieved despite the Ukrainian air campaign being directed by NATO from Poland. It reveled in the use of long-range weapons, and in particular, Kalibr missiles, and hypersonic weapons. The author noted that the Ukrainian towns of Izyum and Chuguev, southeast of Kharkiv, were putting up a fight, which could be ended “by just a few volleys of modern RZSO [a multiple rocket launcher], but humanitarian considerations forced the Russian army to refrain.” The ruined Azov Sea city of Mariupol is besieged, Vzglyad acknowledges, although its treatment at the hands of Russian forces is not.

Meanwhile, at home in Russia, the authorities see anti-war sentiment everywhere they turn. A Moscow court judged a poster with the inscription “Fascism will not win” as discrediting the Russian army. Social media users ironically suggested that the Kremlin would have preferred the slogan “fascism will win” and called the case “an open confession of the fascists.” A number of Russians have been arrested for holding up blank pieces of paper in public spaces.

The Dossier Center meanwhile pointed to the issues around the Kremlin’s supposed “denazification” campaign in Ukraine by publishing a large investigation into the Kremlin’s connections with the European far-right.

Such contradictions are not noticed by ordinary Russians. The website has been blocked by Russia’s federal censor, Roskomnadzor since last year.