Putin gave nothing, achieved everything he wanted and the door remains open to more. 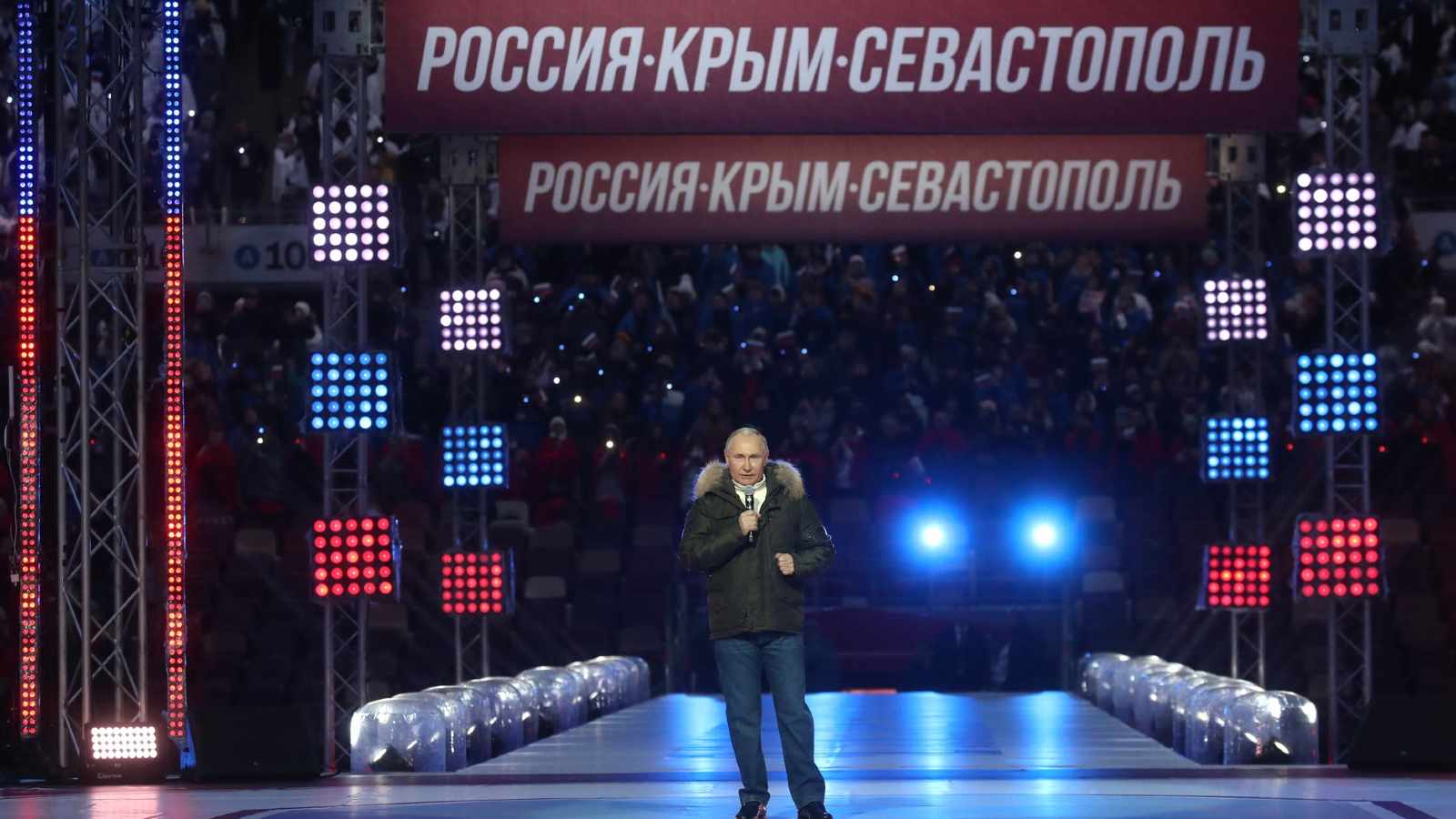 Photo: Vladimir Putin gave a speech at the festive event held at Luzhniki as part of the Days of Crimea in Moscow. March 18, 2021. Credit: Kremlin

Approximately three weeks ago, Russia suddenly embarked on the most extensive build-up of military forces in and around Ukraine since its seizure of Crimea and attacks in the Donbas in 2014-2015.

The forces came from as far away as Siberia and the Caspian Sea (via the Volga-Don canal) and included diverse and sophisticated weaponry, such as attack aircraft, tanks, paratroopers, amphibious landing vessels, and nuclear-capable short-range missiles. Russia closed off vast areas of the Black Sea, claiming the need to isolate them for military exercises, and closed the Sea of Azov to anything but Russian-approved vessels.

Accompanying the build-up was an intense disinformation campaign that accused Ukraine of escalating the fighting in the east of the country, and warning that it would be destroyed in the event of new attacks (even though Russia was itself creating the crisis). Russian disinformation at first claimed that Russia was responding to Ukrainian provocation, and later claimed it was merely a military exercise within Russia’s sovereign territory and a threat to no one. This also coincided with Russia’s ongoing use of hybrid power in Belarus, and President Vladimir Putin’s annual state of the nation address to the Duma, in which he warned against anyone threatening Russia’s interests, or crossing its redlines, which, he said, are solely a matter for the Kremlin.

The military build-up drew swift condemnations not only from Ukraine, but from Germany, France, the UK, Canada, NATO, the G7, and many others. In an unprecedented development, the U.S. President together with the secretaries of State and Defense, the National Security Advisor, and Chairman of the Joint Chiefs, all called their Ukrainian counterparts within two weeks to reassure Ukraine of U.S. support for its sovereignty and territorial integrity. German Chancellor Angela Merkel pointedly called on Putin to pull back his forces.

Then, just as suddenly, on April 22, 2021, Russian Defense Minister Sergey Shoygu announced that the massive military forces Russia had deployed would be returning to their “permanent bases” beginning the next day. Sighs of relief could be felt across Europe.

Some analysts asserted that Putin had backed down, since he had gained nothing from these bellicose activities. Ukraine’s President Volodymyr Zelenskyy continued his crackdown on pro-Russian figures in Ukraine. The West made tough statements and threatened more sanctions. World attention remained focused on Navalny’s ill-health in prison. Putin’s gambit had produced nothing.

This is a comforting thought to those in the West who clearly wanted to avoid a harsh confrontation with Russia. Statements by Western leaders, without any genuine action, had produced a Russian de-escalation.

As seen through the eyes of the Kremlin, however, Putin gave nothing, achieved everything he wanted, and the door remains open to more.

Putin demonstrated the capability and political will to deploy massive military force at short notice, complete with command and control, logistics, and nuclear-capable equipment. In so doing, he highlighted that Ukraine lacks the capability, and the West lacks the will, to deploy and use counter-vailing force. Indeed, the United States decided to turn around two warships that had otherwise planned to enter the Black Sea, to avoid “escalating” the crisis.

Putin, therefore, underscored a key political point he has been making for years: the West may talk a good game, but Ukraine cannot count on Western support. It is inherently connected to Russia and must come to terms with the Kremlin.

President Zelenskyy sought to turn this into an advantage by seeking a direct bilateral meeting with Putin to discuss the Donbas. Putin agreed the men could meet but refused to discuss the Donbas, perpetuating the false narrative that the conflict is an “internal Ukrainian matter” in which Russia is a facilitator of peace. The West has been silent.

Peripherally, while the West has welcomed Russia’s supposed de-escalation, Putin has in fact increased its permanent presence in Crimea, brought new military equipment to the region which will remain forward-deployed, blocked off major swathes of the Black Sea and the Sea of Azov at least through October (if not longer), and enhanced its stealth takeover of Belarus. Yet instead of being condemned for these acts, Russia is being praised for its stand-down.

Amid all this, President Biden called President Putin and offered a summit meeting in the near future. Sorting out such problems “superpower-to-superpower,” over the heads of the people actually concerned, is exactly the dynamic Putin seeks to create. While it is clearly not Biden’s intention to affirm such a dynamic, Putin got what he wanted.

Bottom line: Putin entered the month of April with Zelenskyy looking as though he was finally getting tough domestically, while the Biden Administration was rallying its allies internationally. He leaves the month of April with Ukraine looking vulnerable, the West having demonstrably shied away from a military show of force, and Putin having strengthened his position in the Black Sea, Belarus, Crimea, the Donbas, and the Southern Military District, headquartered in Rostov-on-Don. From the Kremlin’s perspective, a clear success.

The question now is whether and how the West can push back on this new reality. Some fundamentals still apply: Increase security assistance to Ukraine to increase the visibility and damage Russia would suffer if it launches a new invasion; put the U.S. and other NATO forces in forward positions to show that the West also has serious military capabilities and the will to use them; advertise in advance the sanctions Russia will face if it launches new attacks; shut down Russian intelligence agencies operating in the West, as the Czech Republic is now doing; slam the brakes on Nord Stream 2; and exclude Russia from major diplomatic gatherings among civilized nations until its own actions warrant a change. None of these steps will reverse actions Russia has already taken. But it will cause the Kremlin to think seriously about any next steps.