Putin Has Invaded Our Cortex 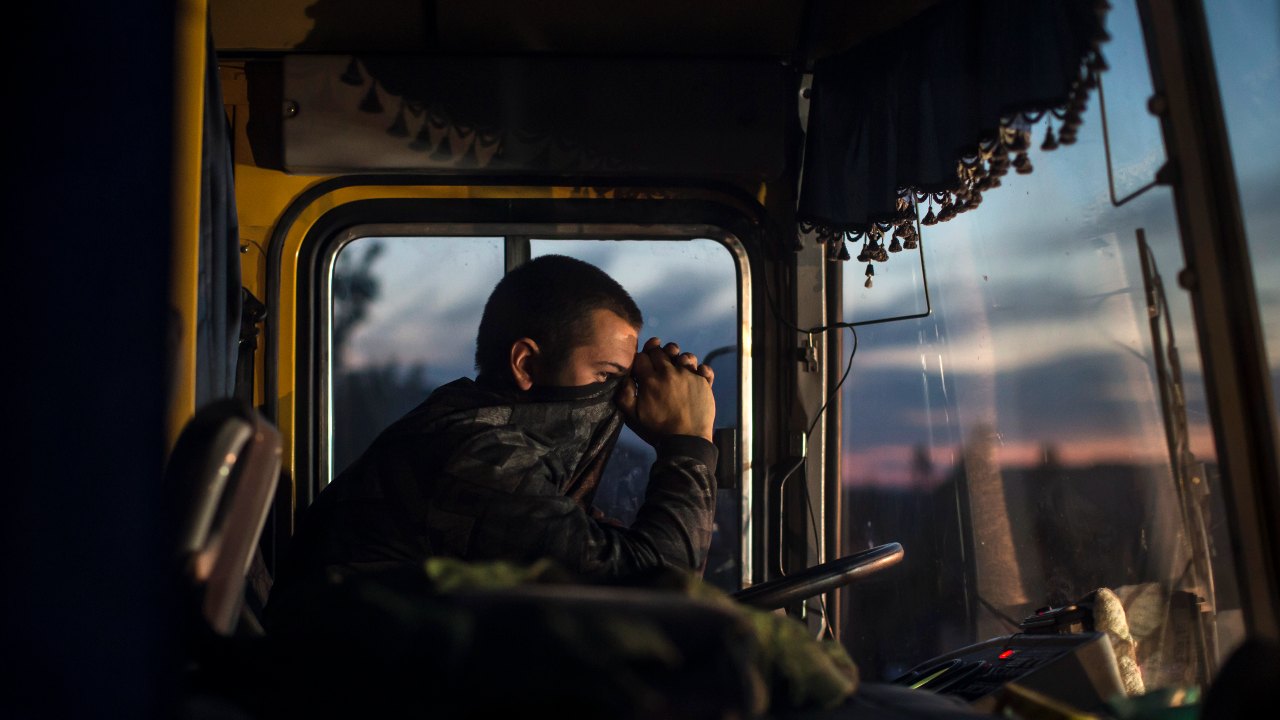 Photo: A driver sits inside a bus during an exchange of prisoners-of-war (POWs) near Donetsk, eastern Ukraine, September 21, 2014. The two sides, that of the government forces and the pro-Russian separatists, are exchanging POWs under the terms of the current ceasefire. Credit: REUTERS/Marko Djurica

The developing crisis in Ukraine seems headed to a point where we must choose between a yet bloodier Russian invasion of Europe’s largest country by geography, and the resulting conflagration, or a further capitulation by the West.

There are only two winners from this situation — Russia, for which worsening conflict is a policy aim, and China, whose ambitions would be hugely advanced by the West’s retreat.

How did we reach this point? Only last year, then-candidate Joe Biden lamented the international order “falling apart at the seams.” Yet at June’s Geneva summit he accepted Putin’s diktat, the Minsk Protocols. This has since been officially reiterated by other senior administration officials. Minsk wholly abrogates the “rules-based international order” by imposing on Ukraine, the victim, terms that international law imposes on the invader, Russia, through restrictions on its national sovereignty and territorial integrity.

Minsk is silent on Russia’s 2014 annexation of Ukraine’s Crimean peninsula, a fact seemingly accepted by the US de facto, though it protests otherwise.

America’s capitulation is otherworldly, and jettisons any credibility about Biden’s angst over the unraveling of the “international order,” even as his administration prepares its long-touted Summit for Democracy this week. It is possible to conclude that invasion, occupation, and annexation work, and that the US has become Putin’s enabler, inviting his contempt, while stoking his arrogance and certitude.

For more than seven years, official European and America’s pronouncements have been voluminous: we have reminded Russia of its obligations, reiterated, not recognized, called upon, warned, condemned and not tolerated, we were being loud and clear, making clear, clarified, declared as unacceptable, expressed unwavering support for Ukraine, firm support, demanded of Russia, insisted, closely monitored, took note of, affirmed, reaffirmed, demonstrated, met, conferenced, resolved, expressed commitment, deep commitment, reiterated our conviction, remained steadfast, sent a message, called for restraint, stood firm, stood with, stood next to, stood behind, stood alongside, urged, encouraged, expressed concern, utmost concern, grave concern and profound concern. It’s a thesaurus in a word search for “appeasement.”

Half-hearted, ineffective sanctions do in fact reflect Western comprehension and resolve. Barring Putin’s acolytes from Disney World scarcely matches the scale of Russian-induced international mayhem. Nor does the fitful and limited provision to Ukraine of sorely needed military aid. Endless “resets,” always at the US initiative, fuel the flames.

Appeasement seeks moral balm — Putin is merely acting “defensively,” no worse than any other country in pursuit of its self-interest. His is but a reaction to Western belligerence rooted in NATO’s “encroachment.” Russia fears “encirclement” and needs a “buffer.”

Here are the unacknowledged realities:

• Despite the fall of the USSR, Russia remains geographically the largest country on the planet, incorporating 40% of Europe and an entire third of Asia. Not a square meter was lost after 1991. One of its sub-regions alone, Kolyma, is the size of Iraq, Iran, and Afghanistan combined.• In the 1890s, the Russian General Staff conducted a study of its military campaigns between 1700 and 1870. Russia fought 38 wars; only two were defensive. A more modern accounting would not change that balance. Parroting Putin’s lament about Russia’s “security needs,” its “backyard” and “sphere of influence,” rewrites history and shows no consideration for the legitimate grievances of Russia’s historically persecuted nations. Yet Western empathy is reserved exclusively for the burlesque of Putin’s “anxiety.”• In World War II, Russia’s territory was barely touched. It was Ukraine, Belarus, and the Baltic nations that were overrun. Twice. Ukraine suffered a greater loss of life than any country in Europe. More Ukrainian civilians were killed than the combined military losses of the United States, the British Commonwealth, France, Germany, and Italy. Millions more were killed serving in the Red Army or as slave laborers in Germany. Yet not long ago a former American ambassador to the UN spoke of “Russia’s [sic] immense contribution in that war. [WWII] is part of their proud history of standing up to imperialist powers, from the Mongols in the 16th century to Napoleon in the 19th century.”• Vitriol against NATO “encroachment” and “encirclement” presents an illusion. The three Baltic nations, for example, represent just 1.4% border of Russia’s borders. Meanwhile, Russian claims that NATO promised not to expand eastward are simply untrue. After the dissolution of the USSR, NATO members disarmed and thus took a significant “peace dividend,” although that peace did not extend to Russia’s neighbors.• The West seems guilt-ridden over the Soviet Union’s collapse, and worries that the former KGB agent, Putin, is “humiliated,” “embittered” and “offended” over the implosion of a feared totalitarian state. Thankfully, we expressed no such solicitude for the angst of Gestapo officers when Nazi Germany was defeated.

After 1991, the US hungered to bring Russia into the international brotherhood of nations, ascribing to the Kremlin our own civilizational imperatives. But this was without requiring the kind of contrition, apology, and reformation that occurred in post-war Germany.

Former Russian Foreign Minister, Andrey Kozyrev was clear: “This so-called ‘humiliation’ is a Kremlin myth. On the contrary, Russia — and I am a living witness to this — Russia was provided with assistance . . . since the very beginning of its democratic reforms, even under Gorbachev. And especially during the hard times in 1991-92. When the Soviet economy came to a complete standstill, when there were barely any medicines, and in some areas even food, we were handed help, provided with substantial humanitarian aid. Moreover, the US. helped us preserve our status as a permanent member of the UN Security Council, to remain the only nuclear state in the territory of the former Soviet Union . . . . They helped us join the World Bank, International Monetary Fund, and other organizations. This all happened at a seminal moment when Russia could have lost everything — both its statehood and international status. America helped us not only to preserve all this, but also to elevate our status.”

Yet the world’s democracies are still apologizing, an attitude best summarized by the apologetic words of British Prime Minister, Boris Johnson: “When we say that we support the sovereignty and integrity of Ukraine, that is not because we want to be adversarial to Russia, or that we want in some way strategically to encircle or undermine that great country.”

That is the background of the events now unfolding before us. To avoid Russian invasion, Putin will now seek to extort a capitulation at Ukraine’s expense. There is one other option though. Toss our self-anesthetizing hallucination and recapture what George Orwell called “reality control.” Provide significant military aid to the target, impose crushing sanctions, stop North Stream 2 and force Putin to turn inward and face Russia’s multiple domestic problems. Meanwhile, China watches and bides its time.

Victor Rud is past Chairman of the Ukrainian American Bar Association and now chairs its Committee on Foreign Affairs. He is a graduate of Harvard College and Duke University Law School.