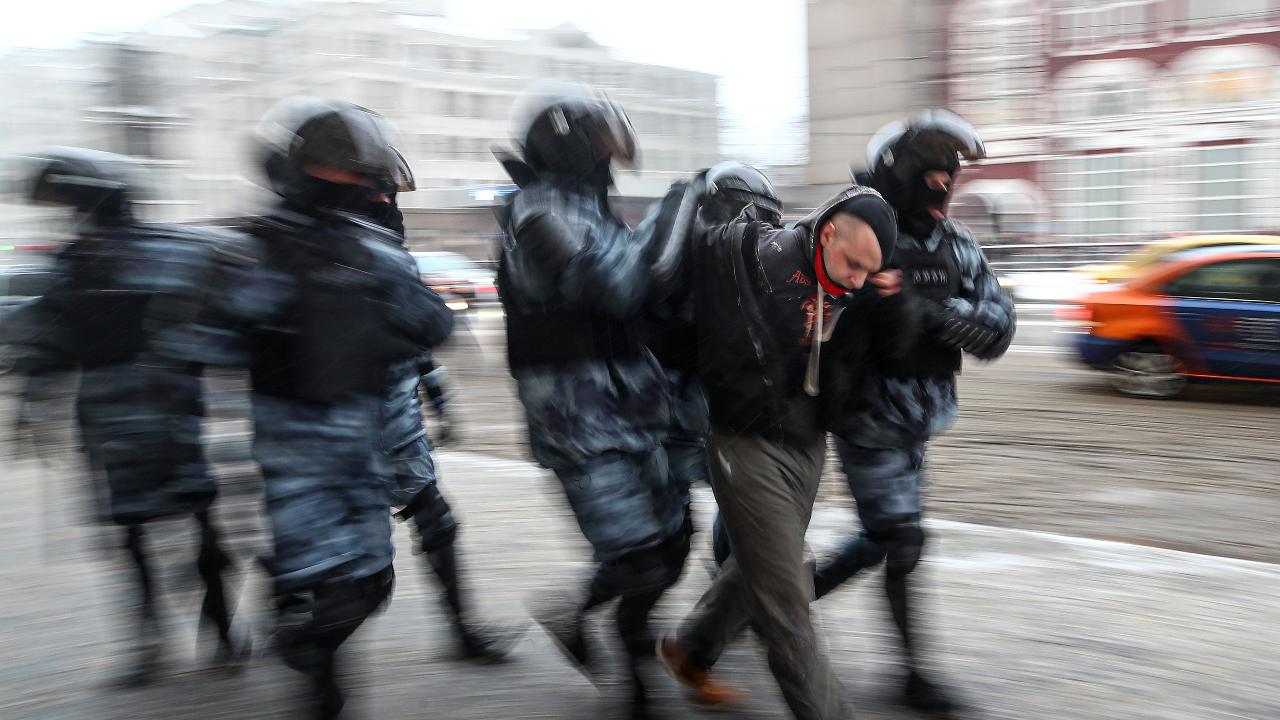 Photo: Riot police officers detain a participant in an unauthorized rally in support of Russian opposition activist Alexei Navalny in Komsomolskaya Square. In connection with calls for protests, pedestrian movement and public transport have been restricted in central Moscow. Access to several stations of the Moscow Metro has been temporarily closed, with trains passing without stopping. Valery Sharifulin/TASS.

Sergey Umnov, a police general and adviser to the Interior Minister, was detained and accused of abuse of power on July 6, a now-typical accusation against officials who have fallen from favor. Two other Interior Ministry generals were arrested at the same time.

The case against Umnov is being investigated by the FSB and the Investigative Committee, Russia’s two most powerful repressive organs of state. He is accused of using money from St Petersburg’s Police Support Fund for his personal needs. Until 2019, the general headed the city’s police force and maintained close ties with the local force after his transfer to Moscow.

It is not news that Russia’s police are riddled with corruption. Nor is it surprising — for decades they have been a tool of extortion against businessmen, providing protection in return. There were periods when every department of the police and the FSB, both in Moscow and the regions, had its own foundation, ostensibly to collect money from patriotic businessmen to buy equipment and uniforms and provide additional pensions to the department’s veterans. In fact, they were extortion rackets.

Saint-Petersburg is special to Putin; it is his native city, yet if this had happened 10 years ago, the corrupt generals would merely have lost their official positions and instead moved into lucrative posts in Russian state-controlled corporations.

Putin allowed and even encouraged that kind of corruption for many years, since the former KGB colonel preferred to deal with corrupt officials who were always vulnerable to a loss of his favor, rather than honest people with their own opinion. (Russia is the lowest rated European country in Transparency International’s Corruption Perception 2021 Index, ranking 136 out of 180 countries). In Putin’s system of governance, personal loyalty always ranked above competence and professionalism.

But this system of immunity began to dissolve soon after the annexation of Crimea in 2014 and the (to Putin) terrifying image of a popular uprising, with its calls for EU integration. Amid the shakeout that followed and which still continues, many of his loyalists and siloviki were sent to prison, including ministers, governors, and security service generals.

And now every new criminal case is not about punishing a particular corrupted official, but about the need to “clean up” a ministry, department, or federal agency. In this approach, high-placed officials are arrested and then interrogated to provide compromising information on their bosses – to make the entire bureaucratic entity tremble in fear. Just a week ago, a top Russian economist Vladimir Mau was placed under house arrest – and the talk in Moscow is that he was not the real target, which is thought to be but his friends in senior economic roles within the government, including the Central Bank.

Umnov is not the only police general who fell victim to the purges; quite apart from the other two generals, the Investigative Committee and the FSB raided the houses of several colonels. The purges are designed as a signal to the Interior Ministry, including the minister himself, Lt-Gen Alexandrovich Kolokoltsev. Many top police officers will now be asking themselves what exactly the three generals are being interrogated about and who they might implicate.

What makes this case stand out is that this is an attack directed not only at the Interior Ministry, but at people close to Putin. The foundation affiliated with Umnov was also connected to a businessman called Dmitry Mikchalchenko, who just a week ago was sentenced to 20 years in jail for embezzlement during the reconstruction of Putin’s residence in Novo-Ogarevo. Mikchalchenko, of course, was not any other businessman in the construction business, he was also a protégé of the former head of the FSO, Putin’s praetorian guard. Now the FSO will also be fearful of what secrets might emerge as a result of the investigation.

In Putin’s new system, corruption is still allowed but the practitioners run the risk of hefty prison sentences. The trick is that nobody knows who the next victim could be, and which ministry or agency Putin might decide to “clean” next. That puts every official, every minister, and every general in the police or security services on edge.

The war in Ukraine and the profoundly mediocre performance of the Russian army on the battlefield have inflamed Putin’s paranoia about a revolt of the elites leading to a coup.

He has therefore turned to tried and trusted methods once employed by Stalin to keep his elite on a short leash. The reality in Russia is getting more Stalinist not only for the opposition and protesters, but for Putin’s people as well – and the only question now is how brutal the repression needs to become to make Putin happy.

Andrei Soldatov and Irina Borogan are Nonresident Senior Fellows with the Center for European Policy Analysis (CEPA.) They are Russian investigative journalists, and co-founders of Agentura.ru, a watchdog of Russian secret service activities.