A film about the Russian opposition leader poses hard questions. 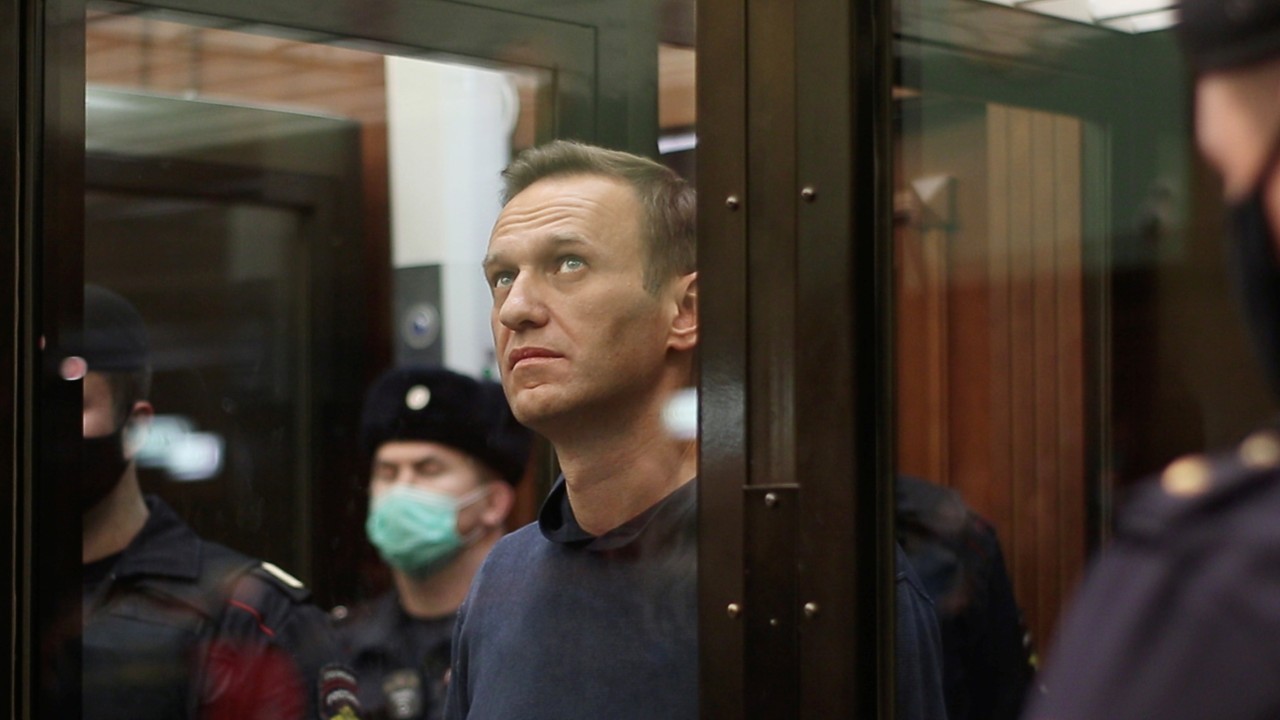 Photo: A still image taken from video footage shows Russian opposition leader Alexei Navalny, who is accused of flouting the terms of a suspended sentence for embezzlement, inside a defendant dock during the announcement of a court verdict in Moscow, Russia February 2, 2021. Credit: Press service of Simonovsky District Court/Handout.

Alexei Navalny is in prison. But his ideas are not. On Saturday I was invited to the London premiere of the Canadian filmmaker Daniel Roher’s new documentary about the Russian opposition leader.

The main message of the film is that the Kremlin’s grip on power is far more fragile than it seems. Given a fair contest, Navalny would be president and Putin would be in prison. The central evidence for this argument is Navalny himself. The story was mostly filmed in Germany in 2020, where the veteran anti-corruption campaigner was recovering from a bungled poisoning attempt. Navalny is indubitably brave. He insists on returning to Russia, where he is immediately arrested (he is now serving a lengthy jail sentence). He also comes across as highly likable: self-deprecating, warm, and witty. This helps illustrate the sub-plot: the love story with his wife Yulia. The co-star gained a well-deserved standing ovation at the screening.

Few would dispute the film’s scathing depiction of the Russian authorities: by turns brutal and blundering. Not only do the FSB assassins fail in their mission, but Navalny, an expert mimic, makes a phone call in which he pranks one of the goons, Konstantin Kudryavtsev, into revealing its details. The inside story of that, including the stellar detective work by Christo Grozev of Bellingcat, is expertly told. At the end of 59 minutes, viewers are hankering for more.

Indeed, it is easy to imagine a sequel. Putin’s war ends in disaster. Hurriedly freed from prison, Navalny returns to Moscow and is swept into power by happy Russians disgusted by the repression and aggression of the Putin regime. As the credits roll, a rainbow glistens over Red Square and we all live happily ever after.

But for all its sizzle, the film raises more questions than it answers. Navalny’s anti-corruption campaigns worked when Russia still had some elements of political and media freedom. It is unclear whether public shaming of corrupt officials, or mass protest to express public outrage, can work now, in conditions of extreme repression coupled with easy emigration. Some leading Russian opposition figures were at the premiere. Others are dead.

A deeper issue is about Russian support for Putin and his war. A sizeable slice of the population appears to have accepted the regime’s murderously imperialist approach to Ukraine. True, the Kremlin lie machine may have deceived these people. Many have been scared into silence. But responsibility for the colossal human and physical toll of the war will burden all Russians for a generation. Just blaming Putin and his cronies is too easy.

During the post-screening discussion, a questioner asked pointedly if Navalny as president would pay reparations to Ukraine. His representative, Maria Pevchikh, rightly declined to give a definitive answer. We were launching a film, not a manifesto.

But if anyone remotely friendly, let alone Navalny, replaces Putin, I fear a revival of another film we saw in the 1990s, featuring Boris Yeltsin, when pernickety victims of Soviet imperialism were told to stop complaining and see the big picture: keeping the “good guys” in the Kremlin.

That approach — cynical and naïve in equal measure — sowed the seeds of disaster. Because Russians never had to confront fully the crimes and lies of the Soviet past, they readily believed the hardliners’ myths of humiliation and betrayal. That laid the foundation for revanchism and war.

The post-Putin era may come sooner than we think (the Soviet collapse did). It may be that the new line-up in the Kremlin will be profoundly ashamed of Russia’s past and determined to atone for it. Or, more likely, not. Start planning now.