As the ice has melted, Russia has wasted no time staking its claim. 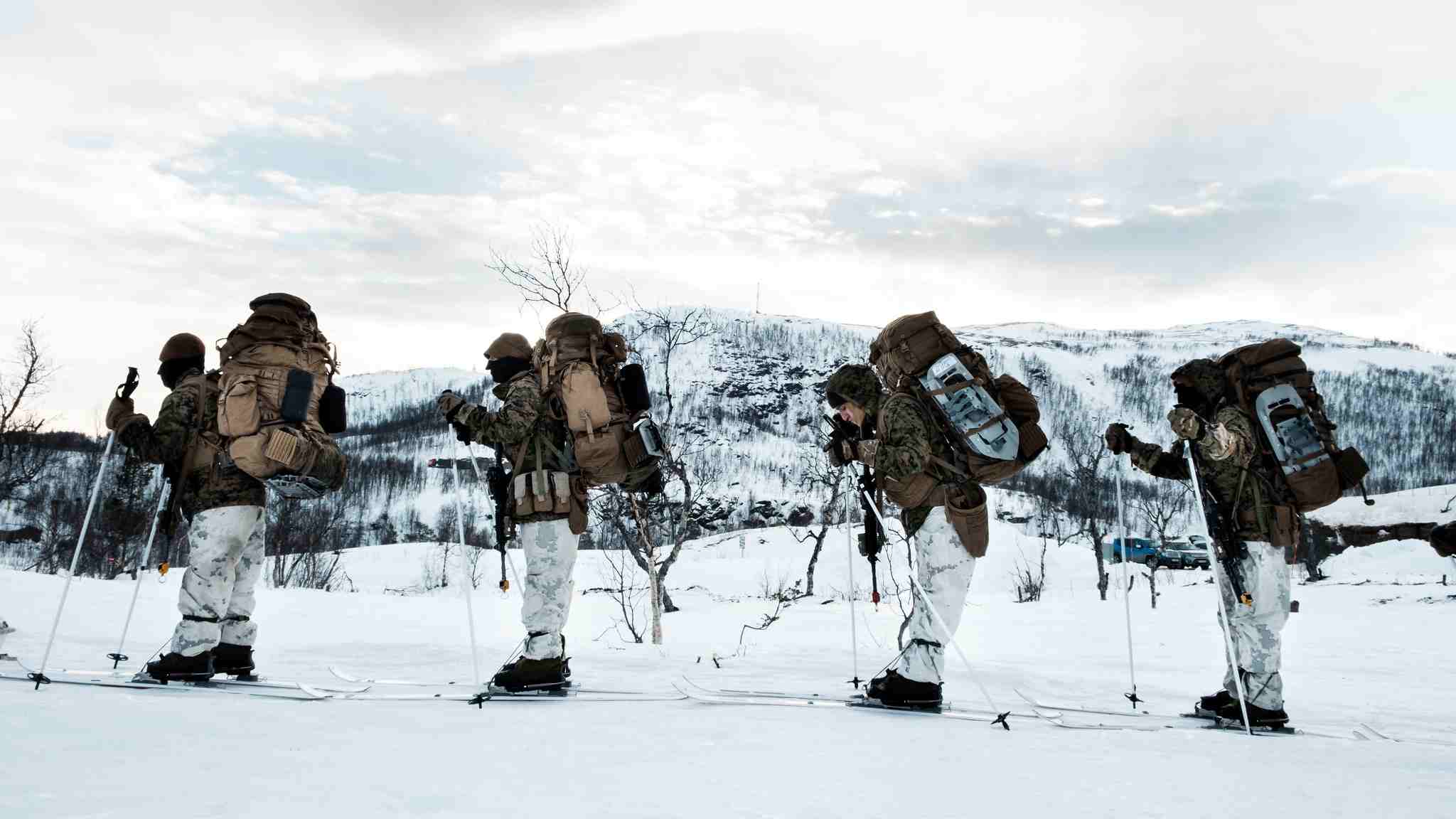 Long praised as a place of global calm amid a sea of worldwide competition, the Arctic is rapidly deteriorating into a region where great powers will inevitably butt heads. Icecaps melting due to climate change have opened up previously inaccessible resources and sea routes, leading to increased activity and causing international attention to turn north. Russia’s expanding Arctic presence has Western leaders concerned that they may lose out on the largely untapped economic and military potential of the region. As the ice continues to melt, competition over resources and influence is inevitable. It’s time for NATO to develop a comprehensive strategy for the Arctic or risk Russian domination.

In March, President Putin launched the development of an updated national strategy for the Arctic ahead of the country’s chairmanship of the Arctic Council — the main cooperation platform for regional issues — in 2021-2023. Yet there is as yet no Allied strategy for the region — opening the door to Russian advances, and emboldening Putin to continue his Arctic military build-up, including the deployment of increasingly sophisticated weapons systems.

These evolving security dynamics are sparking debate among experts and policymakers on what if any approach NATO should adopt. The U.S. has recognized the geopolitical significance of the Arctic and its role in great-power competition — it now has more fifth-generation combat aircraft in Alaska than anywhere else, the U.S. Navy’s Second Fleet in the Atlantic was recently reactivated, it has added additional icebreakers to its navy and upgraded a military base in Iceland. The Allies, however, remain split on how to approach the situation. Some desire a more substantial allied military presence in the Arctic to deter Russian activity, while others would prefer that the Alliance remain out of the region, believing a NATO presence would escalate tensions.

For Russia, on the other hand, the Arctic region has long been central to its foreign policy. The country is one of the biggest players in the Arctic region, both in terms of its military presence and sheer territorial claim — over 50% of the Arctic Ocean’ coastline is Russian territory. In a 1987 speech, Soviet leader Mikhail Gorbachev proposed that the Arctic become a “zone of peace” through increased international cooperation and demilitarization. Gorbachev put forward a collection of policy proposals called the Murmansk Initiative to achieve this end, namely the creation of a nuclear-free zone in Northern Europe, restriction of naval activity in the region, international cooperation on extracting resources, and coordination of scientific exploration.

While Gorbachev’s demilitarization ideals were never fully realized, this initiative helped shape international perceptions of the Arctic region, and it is widely considered an area of low tension. This has been helped by the creation of the Arctic Council in 1996, comprised of the U.S., Canada, Denmark, Finland, Iceland, Norway, Sweden, and Russia. According to its mandate, the Council “explicitly excludes military security.” Opting instead to focus on environmental issues and scientific research, the Council has fostered peaceful cooperation between Arctic countries to collaborate on common interests. For example, it facilitated the development of three legally binding agreements, most recently in 2017 when it launched efforts to enhance scientific research cooperation among the Arctic states. Yet by excluding military issues, it has allowed significant variations in individual states’ military initiatives in the Arctic.

As the ice has melted, Russia has wasted no time staking its claim, substantially expanding its northern presence. Russian military activity is headquartered on the Kola Peninsula, which houses Russia’s Northern Fleet, an air base and a submarine base. The military has reopened 50 Soviet-era facilities across Russia’s Arctic territory. Recent military exercises — which included nuclear submarines and combat aircraft — demonstrated an ability to operate efficiently in the Arctic’s harsh conditions, skills that American and NATO forces are lacking. Russia also relies heavily on the Arctic for energy resources, with 80% of its natural gas and 17% of its oil coming from the region. The potential future economic benefits are enormous — Putin previously estimated that the undiscovered natural resources in the Arctic could total $30 trillion, an extremely significant attraction for a country with nominal GDP of $1.7 trillion. Russia will continue building up its military presence in the Arctic to protect these interests and expand its power projection.

For Norway, these developments are particularly concerning. As the only Allied member bordering Russia, Norway has long been the frontline of northern defense and NATO’s “eyes and ears to the North.” Just beyond its border is the Kola Peninsula, where the Russian military has tested several long-range weapons and where it bases intercontinental ballistic missiles (ICBMs), among other advanced systems. This concern prompted Norway to allow an increased U.S. military presence on its territory through the U.S.-Norway Supplementary Defense Cooperation Agreement, which includes improvements to four Norwegian air and naval stations. Last month, U.S. Marines took part in the Arctic Littoral Strike exercise alongside the Norwegian military. In a recent op-ed, Norwegian defense minister Frank Bakke-Jensen noted that “there is no indication that Russia will slow down its engagement in the Arctic,” and underscored how important cooperation with allies, particularly the U.S., is to Norway’s security as an Arctic state. Norway’s most recent Arctic strategy highlights NATO as a “cornerstone of Norway’s security and defense and deterrence policy” and notes that NATO’s area of responsibility extends to the North Pole (where Russian submarines planted a titanium flag on the seabed in 2007.) Further, the strategy states that the Arctic is “Norway’s most important area of strategic responsibility.”

Norway has been the most vocal advocate of the Arctic NATO members advocating an Allied approach. But while NATO leaders frequently express the growing importance of the region for international security and the Alliance, NATO’s presence remains limited and has thus far primarily involved the U.S. The Trident Juncture exercise in 2018 allowed Allied forces to exercise near the Arctic in cold conditions. Norway has plans to lead Cold Response 2022 in the Ofoten region north of the Arctic circle, which will include NATO allies and partner countries.

Canada, on the other hand, seems hesitant to have any foreign involvement, even from allies, in the north. With 40% of its territory in the Arctic, the region plays a major role in Canadian domestic and foreign policy. A key feature of these policies is “Arctic sovereignty,” which asserts Canada’s claim over its Arctic territory, particularly in light of the recent international interest in the region. In 2007, Canadian Prime Minister Stephen Harper stressed that “Canada’s Arctic is central to our national identity as a northern nation.”

Canada also has unresolved disputes with the U.S. and Denmark over sovereignty. The status of the Northwest Passage remains disputed between the U.S. and Canada, with the U.S. viewing it as an international waterway and Canada claiming it as part of its territorial waters. Canada and Denmark, an Arctic state because of its sovereignty over Greenland, have both claimed Hans Island, a 1.3 square kilometer island located in the Nares Strait between the countries. Denmark has also noted the importance of its sovereignty, and the ability of its armed forces to act alone to defend its Arctic territory, rather than relying wholly on NATO. While these disputes will remain peaceful, they could further divide NATO members in the Arctic region.

Recent discourse has emphasized the need for a forum to discuss and coordinate growing military activity in the Arctic. One option is widening the Arctic Council’s scope to include discussion on military issues. Given Russia’s membership, however, this runs the risk of disrupting cooperation in other areas and could inadvertently lead to a worsening of the security environment. As a region that includes several Alliance members and which will undoubtedly affect non-Arctic allies in the future as foreign activity increases, a NATO-led approach in the Arctic makes the most sense. In order to establish and maintain credible deterrence along its northern flank, the Alliance must be able to demonstrate a unified front to adversaries. This is particularly important as non-Arctic states such as China — which infamously dubbed itself a “near-Arctic state” — increasingly insert themselves in the region.

Given rising national ambitions and growing activity, both civil and military, it becomes urgent for NATO members to these address issues now, before they cause problems down the line, possibly during a crisis.

There are positive signs. The NATO 2030 report recommended the development of a regional strategy to increase situational awareness and deterrence within Allied territory north of the Arctic circle. Russia and China will be at the top of the agenda for NATO’s next summit in June, which President Joe Biden is set to attend. While discussions will likely focus on Russia’s military activity along Ukraine’s borders, this meeting provides an opportunity for Allied leaders to discuss Russia and China’s Arctic presence, which will only grow in the coming years, and to consider what this means for Arctic allies and the Alliance as a whole. A single Arctic state can’t do it alone — a unified Allied approach is necessary to counter the growing influence of great powers in the High North.