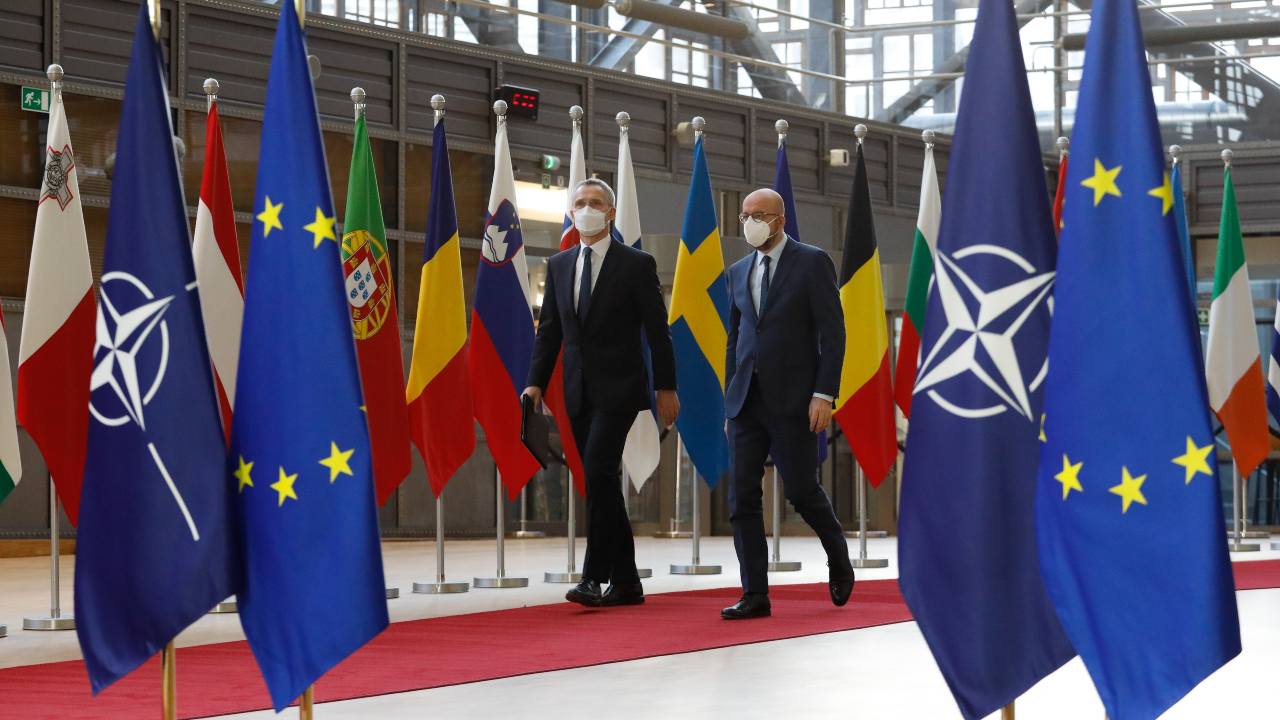 The NATO-EU strategic partnership can be a timely accelerator of global transatlantic leadership.

U.S. and European leaders staged a series of summits last month, paving the way for stronger Euro-Atlantic global leadership and cooperation. However, the opportunity for true forward movement in relations between two key Euro-Atlantic institutions, NATO and the European Union (EU), was arguably missed. Though the summits underlined NATO-EU cooperation in countering critical new security threats, they lacked a major substantive evolution of the relationship at a time when it is desperately needed.

Until relatively recently, the NATO-EU relationship was fraught with tension and unease. Although the EU first agreed on a Common Foreign and Security Policy (CFSP) in 1993, the first NATO-EU meeting only occurred in May 2001. This was followed by milestones including a cooperation framework, staff liaison with permanent communication channels, and the first joint crisis response exercise.

Soon after, however, the partnership faltered due to political and bureaucratic disagreements over issues such as duplicated security efforts, operational jurisdiction, and a Turkey-Cyprus stalemate following the latter’s 2004 EU accession.

The summer of 2016 was a turning point as EU and NATO leaders released a joint declaration in response to“unprecedented challenges.” Russia’s illegal annexation of Crimea and invasion of eastern Ukraine in 2014, the refugee crisis that peaked in 2015, and the rise of right-wing populism in 2016 proved serious enough to overcome some of the friction that had plagued earlier relations. This thawing of tensions was also due to a productive diplomatic relationship cultivated by NATO Secretary General Jens Stoltenberg and EU High Representative Federica Mogherini, who were determined to improve NATO-EU cooperation.

What followed was unprecedented coordination around cyber-defense, hybrid threats, border protection, and 74 other cooperation goals. Since 2018, however, progress towards those goals has been largely incremental, underscored by jointly published annual progress reports and practical staff-to-staff liaising rather than transformative efforts towards advancing the partnership.

The NATO 2030 Reflection Group, appointed to help shape the future of the alliance, advised that as threats to Euro-Atlantic security multiply in scope and scale, so must the responses to them. Since neither the EU nor NATO can quickly develop the strengths of the other, collaboration is essential. For example, the EU’s legislative and budgetary capabilities complement NATO’s interoperable military structure, capability targets, and security and defense standards. Together, they offer a platform for transatlantic consultations and comprehensive action on political, economic, technological, and security challenges.

President Biden’s return to Europe was an ideal opportunity to meaningfully advance the NATO-EU relationship through a bold transatlantic agenda touted by the U.S. and Europe. Unfortunately, neither NATO nor the EU-U.S. Summit fully capitalized on it. The NATO summit communiqué merely reaffirms the alliance’s dedication to the partnership, citing some progress under existing cooperation umbrellas such as military mobility and advocating for cooperation in the Sahel and Iraq and two EU initiatives: the Belgrade-Pristina dialogues and the Georgia-Russia ceasefire agreement. The EU-U.S. Summit statement is yet more abstract, only mentioning “unwavering support for robust NATO-EU cooperation” and a commitment to raising “NATO-EU ambition.”

Though optimistic, symbolic, and important in themselves, these statements fail to signal major advances. NATO’scommuniqué references work with the EU in key new areas such as building resilience, addressing emerging technologies, tackling climate change, and navigating strategic competition, but it lacks detail on how that cooperation might unfold. The EU-U.S. statement addresses similar topics including climate change, great power competition, and the Arctic without mentioning NATO at all. As these two key Western institutions grapple with increasingly overlapping issues, they must avoid redundancy and forge more advanced complementary approaches through a new wave of high-level political momentum.

The lack of headway is not entirely inexplicable. The history of NATO-EU relations offers uncertain prospects for progress, and a primary goal of these summits was simply to repair U.S.-European ties following four tumultuous years of transatlantic skepticism.

Nonetheless, the summits could have done much more to both restore the transatlantic bridge and to bring nearer the dawn of a new era in NATO-EU cooperation. The NATO Strategic Concept and EU Strategic Compass offer additional chances for deepened cooperation by aligning each institution’s core security ambitions, but future failures to advance coordination will become more costly as the transatlantic community races to address crises of collective concern. The NATO-EU strategic partnership can be a timely accelerator of global transatlantic leadership, if only its stewards will take advantage of it.