The EU and the U.S. are being curiously reticent about a deal to save Montenegro from China’s grasp. 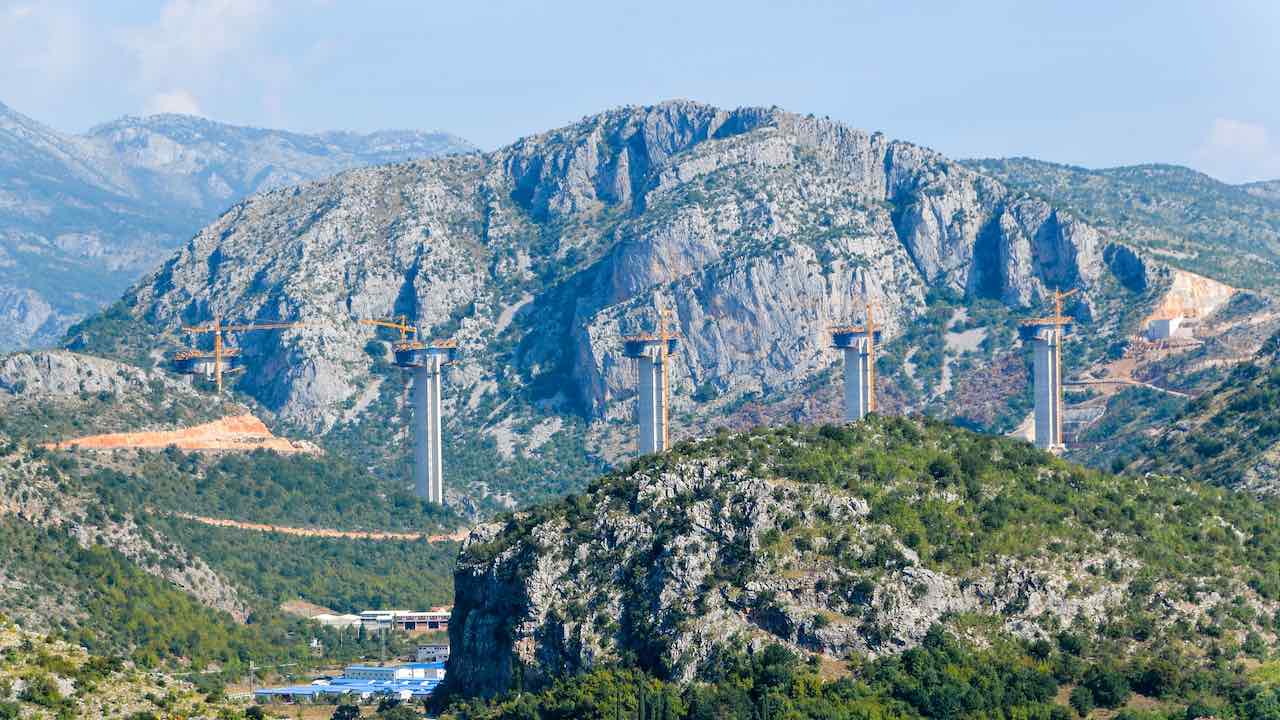 Photo: Construction of a viaduct in Montenegro. Credit: jbdodane.

Anyone doubting the risks of dealing with China should examine the case of Montenegro to see how a financial agreement can lure a country to the brink of an abyss — in this case, the threat that a Chinese state bank would seize sovereign territory as collateral for an unpaid debt.

In 2014, the small Western Balkan country took a €1bn Chinese loan to build a highway from its main port of Bar to Serbia, its landlocked neighbor, only to realize this year that the repayments were unaffordable after the pandemic-hit economy shrank by 15%.

The European Union (EU) offered to help with the rest of the 165km (100 miles) route, but in April refused to bail out Montenegro on the Chinese loan, aimed at funding 41km of the road. Now, to Montenegrin relief and following months of talks, it appears that the country has found a solution.

Milojko Spajić, Montenegro’s finance minister, announced on July 7 that the government in Podgorica had reached an agreement with Western partners to hedge the debt to China’s state-owned Exim Bank, providing much-needed breathing room to the country’s budget.

The agreement did not remove China from the equation, so the debt remains, but the contract with Western banks will reduce the interest rate to 0.88% in euros from 2% in US dollars, a very significant reduction given that the loan represented almost one-quarter of the national foreign debt and included some very unfavorable clauses. If Montenegro fails to repay Exim Bank, the bank has the right to seize Montenegrin territory, as long as it does not belong to the military or is used for diplomatic purposes. Any such seizure would be executed according to Chinese law.

The agreement is Montenegro’s latest attempt to find a way out of the mounting debt caused by the highway loan. The project is a longstanding ambition for the post-Yugoslav state of little more than 600,000 people — about the population of Baltimore. In 2014, the two sides agreed on the loan to construct the Smokovac-Mateševo section, part of a fabulously expensive project requiring 48 tunnels and 107 bridges and viaducts, through the country’s fierce and mountainous terrain. Costs are estimated at more than €20m a kilometer.

In December 2020, the country’s national debt reached a record 103.28% of GDP and with the first tranche of the debt repayment scheduled for July 2021, Montenegrin Deputy Prime Minister, Dritan Abazović, made a plea to the partners from the European Union (EU), asking them for help with repayments.

As noted, the EU response was initially unsympathetic, while China — possibly as a result of the poor publicity — sent representatives to meet Spajić and then declared that negotiations with Exim Bank had been successful. Chinese leaders also stepped in and expressed willingness to extend the repayment grace period to next year.

It is unclear whether this influenced the EU’s approach. Several EU officials stated their willingness to work on a solution, although it is unclear whether the bloc played any role in the hedge agreement. The EU Delegation to Montenegro refused to comment on the author’s question whether it or any other EU institution participated in the negotiations, saying: ‘’EU delegation does not comment on bilateral financial arrangements between Montenegro and commercial banks”. According to Minister Spajić, the agreement involved two American banks, Merrill Lynch International and Goldman Sachs International, France’s Société Générale and Germany’s Deutsche Bank. He did not mention EU involvement.

The U.S., on the other hand, was more fulsome in welcoming the deal. The U.S. embassy in Podgorica congratulated Montenegro in a Twitter post, and the US special representative for the Western Balkans, Matthew Palmer, praised the arrangement, saying that it will limit the influence China could have on policymakers in Podgorica. He added that Western Balkan states should be more cautious when making arrangements with China since it uses infrastructure projects as a diplomatic tool that can push countries into debt traps. That was criticized in a predictably sour statement from the Chinese embassy: ‘’U.S. officials need to be reminded of minding business only between the U.S. and Montenegro during their visits, and worry less about friendly relations between China and Montenegro’’.

The fact that U.S. banks were included shows that the main facilitator of the arrangement might not be Europe at all, although the U.S. Embassy in Podgorica also denied involvement: “The U.S. government played no role in the recent hedge agreement reached between the Montenegrin government and U.S. banks’’.

It is, perhaps, rather odd that the success of Montenegrin debt talks has no parents to take credit for the outcome. It is true that the EU has to be careful, in case it ends up solving everyone’s Chinese credit problem (and there are many.) The U.S. too has to be wary, since this is the EU’s backyard. Nonetheless, EU credibility in the Western Balkans is also an important issue, with slow-tracked accession talks and at least some countries like France apparently favoring a very lengthy entry process.

The lack of clarity will remind the Balkan peoples of the beginning of the covid-19 pandemic when regional leaders openly criticized a ‘’lack of European solidarity’’ and turned to China for assistance.

Now would be a good moment to trumpet Western help for a troubled Balkan state. The silence and secrecy are strange and counter-productive.