Let the Guns Speak — Ukraine Is Writing its Future

It is clear that the Ukrainian people are writing their own history; the West must assist them, and be sure to avoid the errors made in 1990s Bosnia. 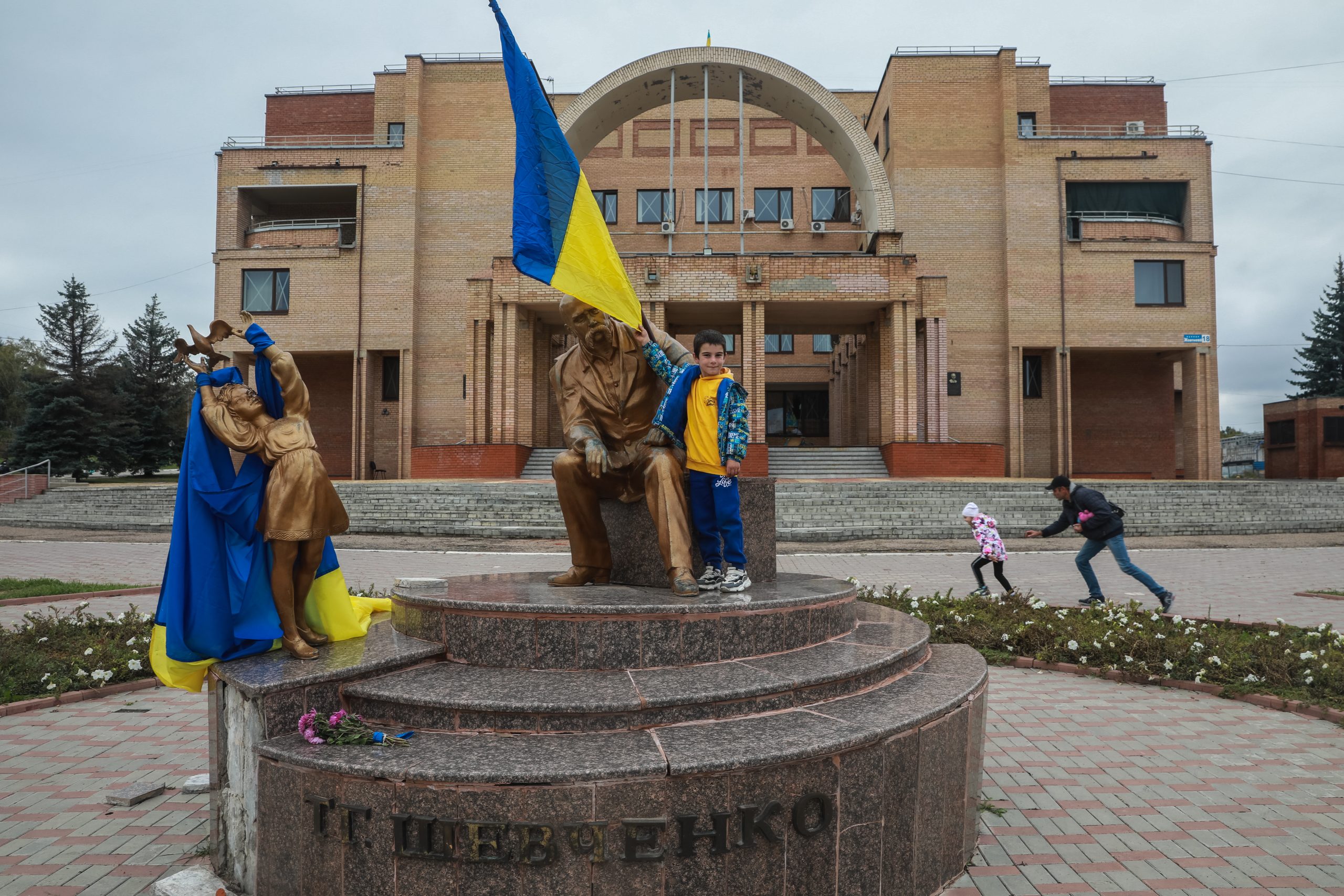 Before Irpin found notoriety through images of Ukrainian civilians fleeing Russian shelling or huddling for cover underneath a destroyed bridge, few foreigners had heard about this small town north of Kyiv.

Surrounded by pine forests, Irpin was some years ago a resort area and was rapidly becoming a commuter city, given the capital’s growing population and high prices. After the Maidan Revolution in 2014, this author visited Irpin, with the purpose of meeting democratic activists, to learn about their fight against corruption and about local networks of power and patronage, which as always are stumbling blocks to real change. As in other places across Ukraine, Old Guard faces roamed around like Mafiosi characters, mixing brutishness and urbanity.

This summer, Irpin was a different place, much of it in ruins because of the fighting that had seen Kyiv threatened by the Russian army before its withdrawal in early April. The Russians shelled from nearby Bucha, where they were also executing civilians. The streets of Irpin are now a succession of churned residential buildings turned black, riddled by bullet holes and craters, with no windowpanes left intact. Pensioners live in container-type temporary housing provided by Polish aid and other agencies, and are fed by the World Food Kitchen Program. Many Irpin citizens lost everything, including the memories that come with a home. Now they wait for reconstruction.

And yet this would be too incomplete a picture to understand war-torn Ukraine. Still, in Irpin, a couple of minutes’ drive away, young families with their children spent a tranquil summer’s evening in a park, where food stalls were busy tending again to customers. Some lay around, enjoying Wifi and defying a brief summer storm. In Bucha, Vokzalnaya Street, which was littered with destroyed Russian equipment in April, not far from the bodies of civilians killed by the occupiers, had been repaired and the debris cleared up and dumped in car cemeteries.

This month, it was astonishing to visit sites in Kyiv hit by the latest barrages of Russian missiles and Iranian drones, and to witness the speed with which Ukrainians had largely repaired the affected areas, and resumed ordinary life. In the popular Shevchenko Park, a crater several meters deep by a kindergarten was a reminder of the “high-precision” missile that landed a couple of days before. Just 48 hours later, the road was repaired and shattered windows were covered by wooden panels. Passers-by took pictures, while others stood to watch elderly chess players enjoying a serene, sunny fall afternoon. Most citizens seemed unshaken by air raid alarms warning of more incoming murder and destruction, while praising the prowess of Ukrainian air defense in social media posts. Ukrainians mourn their losses, and go on.

In the magnificent eastern city of Kharkiv, many inhabitants have left, but many have also stayed behind to contribute to the resistance. Security has improved after September’s successful Ukrainian counteroffensive which pushed back Russian forces so that some systems that were previously in the range are now unable to terrorize inhabitants. But while the city is no longer shelled daily, the city center and its northern districts are regularly targeted from Russia’s Belgorod, 70 kilometers (43 miles) away. While outside, starry skies enveloped a city in darkness, with air alarms in the background, hundreds of citizens, including young people of all stripes, listened underground to a discussion led by the award-winning writer and democratic activist Serhiy Zhadan, and the musician and former parliamentarian Svyatoslav Vakarchuk, who urged them to protect culture, “as they (the Russians) can destroy books and museums, but not the spirit behind our art.” He added, to thunderous applause: “Our freedom will survive Putin and any dictator.” There were words of caution too, as “victory should not be idealized”: there are tough years ahead.

In Ukraine, leadership is often bottom-up and it is this civic fabric that underpins the country’s strong resilience and resistance. This is evident in Kharkiv city, largely a city-state like Odesa, with its distinct and pluralistic space. It was this civic unity and its strong sense of identity that Russia failed to grasp in 2014, when it tried and failed to seize Kharkiv through proxies. Proud kharkiviany recount how Russian aggression has made them more united, “like a village”.

Every resistance movement has extraordinary stories of human valor. Yet Ukrainians are reaching new heights in Russia’s war of genocidal intent, the evidence for which grows daily — from the theft of Ukrainian children, to public incitement to genocide at the highest levels of the Russian apparatus (both falling under provisions of the 1948 Genocide Convention), to the targeting of cultural institutions, to Russian attempts at population replacement in the occupied areas, to the ongoing campaign of power plant destruction, to what many here dub a Kholodomor (death by cold, a reference to the Holodomor, the Soviet famines that saw some four million Ukrainians die of starvation.)

Some compare Ukraine with the Bosnian war and Putin to “a Milosevic [the-then Serbian leader who died in prison at the Hague] with nukes.” Foreign policy practitioners shaped by Bosnia reach similar conclusions given Russia’s campaign of destruction — or even posit that it could be worse than that of Milosevic and its proxies.

This author, having served two years in Eastern Bosnia, sees some such echoes too. And yet Ukrainians are also singular in the belief that theirs is not (or not just) a narrative of victimhood, but rather one of empowerment and agency. Hence the appeal by President Zelenskyy “I want ammunition, not a ride” when Kyiv seemed about to fall. “My mitsnishayemo z kozhnoyu vtratoyu” (we get stronger with every loss), reads some street graffiti in Kharkiv.

While trauma is now ingrained in Ukrainian society, the country defies the simplistic mantra that history repeats itself — in reality, every generation sees criminal leaders taking criminal decisions. The point is that genocide and mass atrocities, in general, are not preordained, and every battlefield victory, every village liberated by the Ukrainian army marks one more step away from such fatalism. Their corollary narrative of victory, in spite of huge challenges, is a powerful strategic lever too.

If anything, the West should remember three lessons learned from Bosnia and the Balkan wars of the 1990s, as we enter a new and uncertain stage of Russia’s war against Ukraine.

One, is that if diplomacy is not grounded in positions of force and/or backed by the credible threat of escalation, it has no chance of succeeding. Worse, it can contribute, in a negative sense, to abetting severe breaches of international law and inviting further criminal escalation. This is the legacy of several of the stillborn ceasefires negotiated with Bosnian Serb war criminals in the Bosnian war, when they drew the appropriate conclusions and hence continued to take United Nations (UN) peacekeeping troops as hostages, raped women and killed nearly all the non-combatant men of Srebrenica.

Clear messaging from the US and its allies against further Russian escalation, threats of false flags, and nuclear scaremongering is positive — but only if followed up by new sanctions and more arms deliveries (including modern tanks and long-range missiles), together with stronger action within international institutions (e.g. the International Atomic Energy Agency or the Organization for the Prohibition of Chemical Weapons).

Those, who from naivety or self-interest, periodically call for hasty ceasefires to bring about a “rapid end of the war”, often regardless of Russia’s actions, not only condemn Ukrainian civilians to hell in the occupied areas, and Ukrainian children to deportation: they invite further war and international crimes. With his faux appeals for negotiation, Vladimir Putin, whose decisions show he intends to fight on for a significant time, simply wants to regenerate forces so they can continue the destruction of Ukraine (Russia is now estimated to have destroyed 30% of Ukraine’s power plants.) The term peace camp is thus a misnomer.

Two, if the rules-based order is to survive, and a more peaceful international community emerges from this war, there must be accountability for Russian crimes. These include aggression, war crimes, crimes against humanity, and, potentially, genocide — even if the legal burden of proof here is very high (as Bosnian case law shows.). Hence the support for the work of the prosecutor’s office of the International Criminal Court (even if the court cannot rule on aggression.) Options for a Special Court to judge the Russian politico-military leadership and its genocide propagandists, should also be explored. Russia’s role as a permanent member of the UN Security Council must be challenged too — this is a legacy of the end of the USSR, a time when, contrary to some perceptions, obliging Russia was the norm.

Three, avoid any temptation to “Daytonize” Ukraine; in other words, it is unacceptable to create hastily patched-up peace arrangements that reward the aggressor and forever cast the shadow of partition on the aggrieved country. The Minsk II agreements, obtained by Russia at gunpoint, were a conflict mitigation framework, at worst a placebo for European diplomacy, and which resulted in the humiliation of France and Germany at the hands of the Kremlin.

Hollow proposals for a so-called Minsk III deal have zero chance of eliciting Ukrainian support. They would also fail to deliver peace: Putin sees no outcome whereby Ukraine continues existing as a genuinely sovereign state (and the transformation of stolen Eastern Ukrainian territories from “independent Popular Republics” of the Donbas to Russian federal districts should be another sober warning.)

There is one sure road to peace, however — the rout of the Russian army in Ukraine, a shining victory for President Zelenskyy and his people, and a restoration (or something very close to it) of the pre-February 24 lines of separation and the turmoil this would bring to the Russian regime. This should be coupled with stronger arrangements to support Ukrainian defense (and, with it, European security) in the long run: as long as it takes.

The late Richard Holbrooke, the US lead author of the Dayton deal, later regretted the preservation of the Republika Srpska in the 1995 agreements – a pseudo statelet carved out with ethnic cleansing, which continues almost 30 years later to threaten Bosnia’s viability. Western diplomacy should remember his warnings and, when the time comes for real peace diplomacy, avoid the same damaging pitfalls as the 1990s.