Let Slip the Thoughts of War

Russia’s psychological preparations for war in Ukraine have been years in the making. They just passed a new threshold. 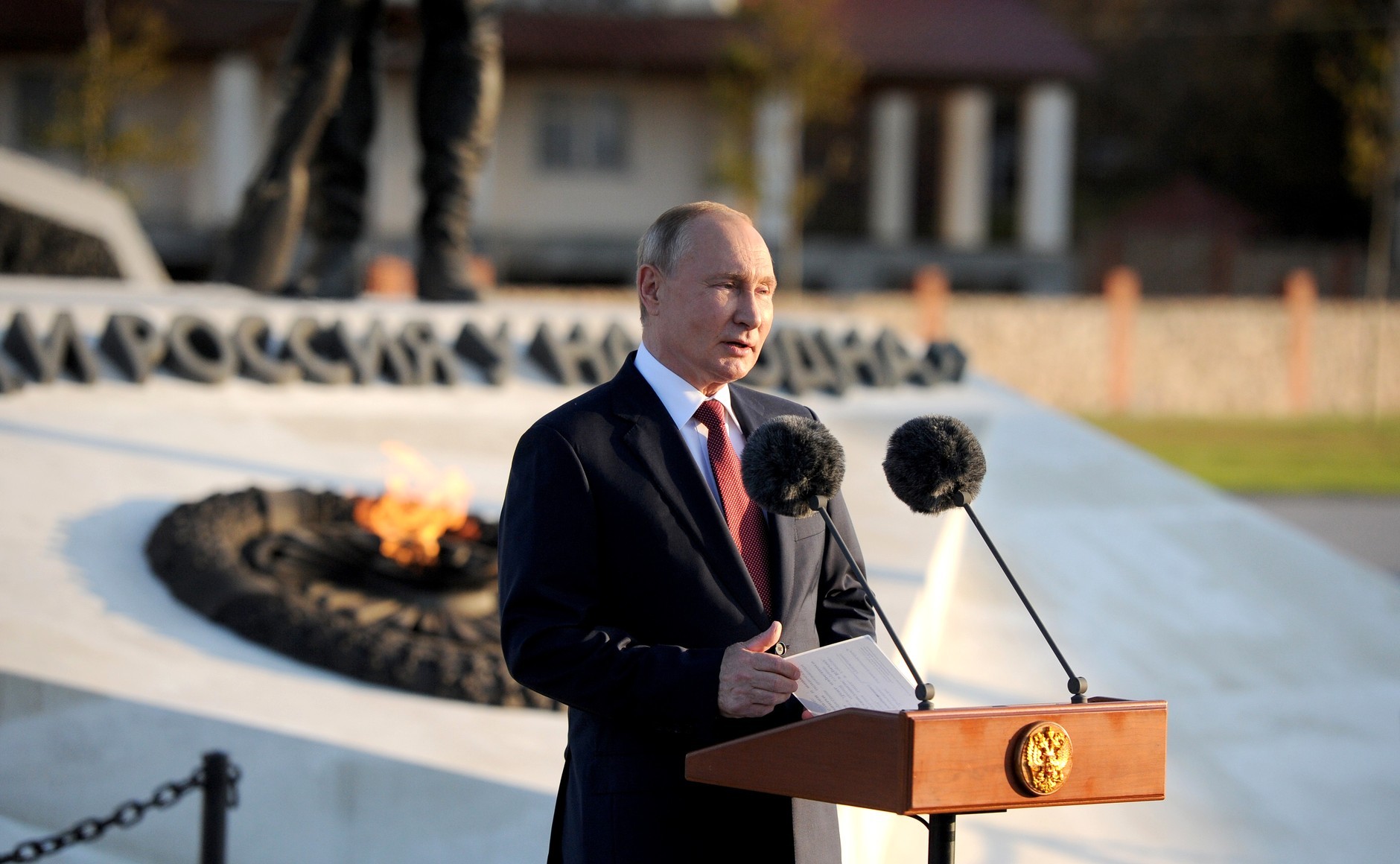 Photo: On National Unity Day, Vladimir Putin visited the memorial complex dedicated to the end of the Civil War in Sevastopol. Credit: Kremlin.ru

“What is happening now in Donbas, we see and know well,” explained Vladimir Putin in a December 10 virtual meeting with his Presidential Human Rights Council, “This, of course, is very reminiscent of the genocide.”

Accusations of genocide are not to be made lightly, Putin continued, but for Russian audiences, such statements should come as no surprise. Russia has long portrayed its enemies as capable of any crime, and previous Russian-instigated wars have followed spurious claims of national destruction. With the purported victims this time other Russians, the Kremlin is beginning to pave the way to the invasion of Ukraine as a humanitarian necessity, rather than an aggressive geopolitical ploy.

In the Russian telling, the country stands athwart an unwanted wave of global Westernization which sweeps away all local traditions, customs, and sovereignty. In pursuit of this, the West is happy to disinform, destabilize, and dismember the polities and peoples that stand in the way. The spearhead of this invasion is NATO, which seeks above all to encircle Russia.

In 2006, when Georgia started to make overtures to the alliance, Russia began whipping up anti-Georgian sentiment resulting in the mass deportation of Georgian immigrants. That helped to prime Russians for Putin’s declaration in 2008 that Georgia had initiated a genocide against the Ossetes, an ethnic group split between Russia and Georgia. The ensuing Russian invasion of Georgia, an act designed to subvert that country’s Westernization, was instead framed as an act of self-sacrificial heroics. Putin’s approval reached an all-time high.

When massive popular protests forced out Ukraine’s Kremlin-backed leader five years later, the same threats of calamity pervaded Russian media. The pro-Western protestors were fascists who idolized the Nazis, and were bent on subjugating the Russian people of Ukraine and exterminating their culture. So hostile to ethnic Russians were the Ukrainians, state media alleged, that they crucified a three-year-old Russian boy. Russia seized Crimea and ignited a rebellion in Eastern Ukraine, which it supported with men and material. Putin’s approval ratings beat their previous high.

For the past seven years, Russian media has delivered a consistent stream of propaganda against Ukraine to keep the issue simmering in the public mind. Ukraine was alternatingly overrun by fascists or Jews, or fascists and Jews working in concert with NATO.

As skirmishes escalated between Ukraine and the secessionists in April, Russia deployed tens of thousands of troops to the border. It backed down, but soon after granted citizenship to half a million ethnic Russians in Donbas. Over the following six months, Russia completed the Nord-Stream II pipeline, the US withdrew from Afghanistan — shaking the confidence of Western-leaning democracies — and gas prices soared, all of which weakened Western leverage and bolstered Russia’s standing. Putin published a rambling tract, rejecting Ukraine’s claim to historical sovereignty and presenting Donbas as the traditional heart of the Russian ancestral homeland. Dmitry Medvedev published an open letter mocking Ukrainian president Volodymyr Zelenskyy, comparing his alliance with Ukrainian nationalists to a Jew serving the SS.

With Russian troops now once again massing by the tens of thousands on Ukraine’s borders, the Russian people are psychologically primed for war. Alexei Chepa, a prominent legislator, declared: “There is an open destruction of our own people.” A military expert on state television mused on what must happen next: “I think this is a powerful legal argument for any action by the Russian Federation, including military action, to stop this genocide.”

This is not just propaganda, there are real risks here. Allegations of an imagined and imminent national destruction can form the justification for genuine barbarity: the Young Turks believed Armenian disloyalty would bring the Tsar’s troops to the gates of Istanbul. Hutu Power convinced its followers that advancing Tutsi forces would slay Hutus where they stood. And, following the Russian accusations of Ossete genocide, the Ossetes waged a campaign of ethnic cleansing against Georgians.

When speaking for himself, Putin has chosen his words carefully without (quite) claiming genocide. But his propagandists have laid the groundwork already — should Russia decide to invade, however clearly for geopolitical advantage, many Russians will believe it to be a humanitarian decision.