In the first days of  2023, Moscow has set its sights on the Russians in exile. 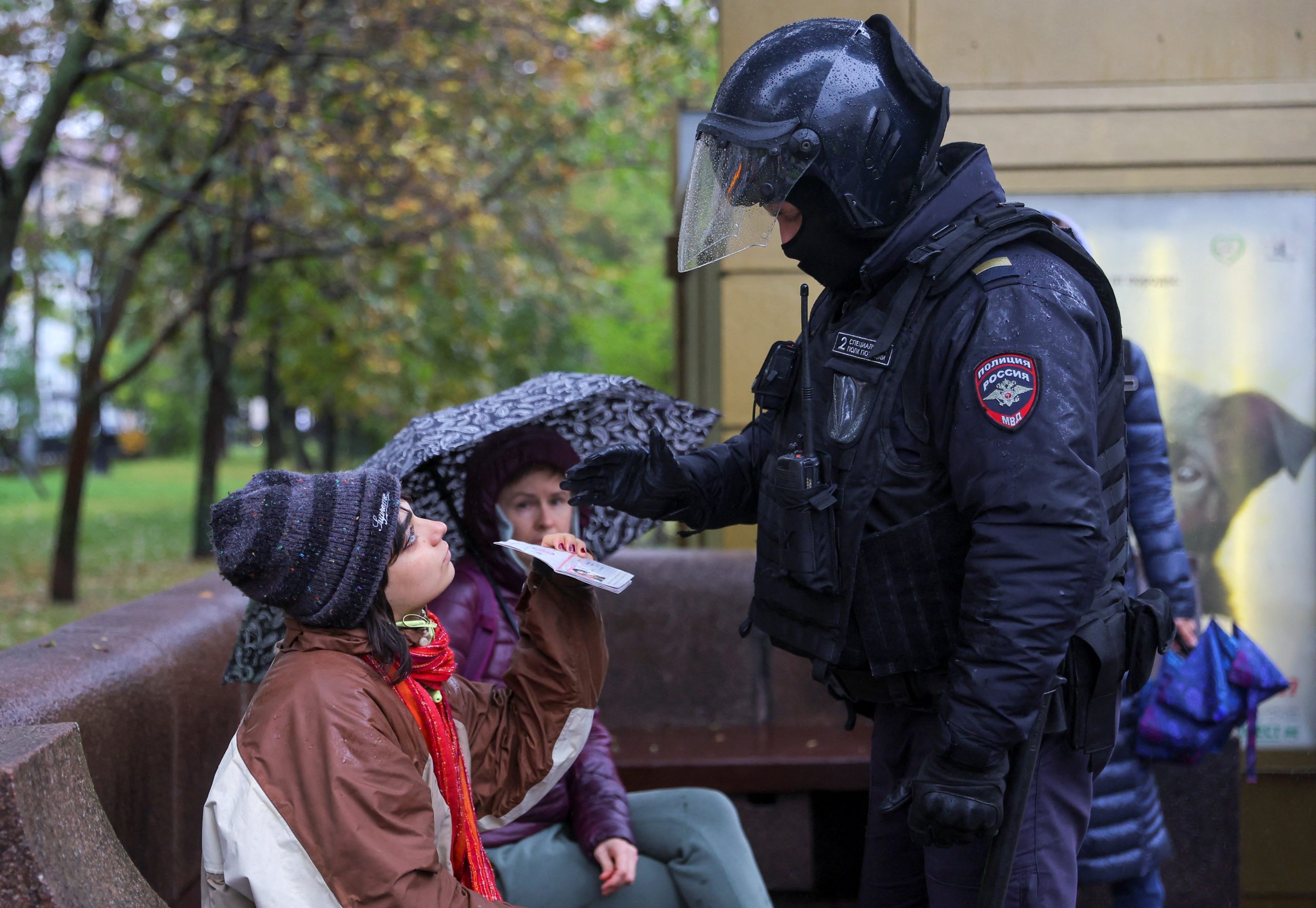 Photo: A person shows a passport to a Russian law enforcement officer during a rally, after opposition activists called for street protests against the mobilisation of reservists ordered by President Vladimir Putin, in Moscow, Russia September 24, 2022. Credit: REUTERS/REUTERS PHOTOGRAPHER

The Kremlin is busy developing a new strategy to deal with the recent, historic wave of emigration which has driven hundreds of thousands from the country.

In particular, the Kremlin has been enraged by statements from famous Russian actors and comedians using the freedom of exile to speak against the war. The issue came to a head after actor Artur Smolyaninov condemned the war in an emotional interview to the Russian media in exile. His words provoked an outpouring of anger from Kremlin-funded patriots who demanded new methods to deal with a war-related refugee wave now thought to number anywhere from 500,000 to 700,000.

Measures subsequently proposed by parliamentarians include the confiscation of all property in Russia and the cancellation of Russian passports — effectively, stripping exiles of Russian citizenship, a measure once used by the Soviet authorities against dissidents and writers like Alexander Solzhenitsyn.

Russian activists and liberals have learned from hard experience to closely follow events in Belarus, a time-proven testing ground for repressive measures. It was troubling therefore when on January 5 the Belarusian dictator Aliaksandr Lukashenka added a new tool to his long list of repressive measures by signing into law a provision allowing the state to strip citizenship from citizens in exile. The legislation takes effect in July.

The measure is not a mere expression of dictatorial frustration. It is highly effective and carefully designed. While the world has changed dramatically since the end of the Iron Curtain, exiles still need documents, and these days the red Russian passport is the only piece of paper most Russian refugees, including activists, journalists, and IT entrepreneurs have at their disposal. Applying for political asylum is a difficult, time-consuming, and cumbersome process.

Confiscation of property and citizenship termination are not the only measures under consideration. Dmitry Medvedev, deputy head of the Russian Security Council, and before that Russia’s prime minister and president, made his public contribution to those he described as “traitors who have gone over to the enemy and want their Fatherland to perish” and “scraps of s***, who until recently considered themselves to be among the so-called intellectual elite.”

In a Telegram post, he suggested acting “according to the rules of wartime”, citing the experience of the Great Patriotic War, as World War II is known. He didn’t hesitate to clarify: “In time of war there have always been special rules and quiet groups of impeccably inconspicuous people who effectively enforce them.”

This language is clear to any Russian. The deputy head of the Security Council has called for the use of death squads against those Russians who have left the country but remained politically active.

Medvedev has had a long record of posting extreme diatribes attacking the West since the invasion started, but it is the first time a high-level Russian official has openly called for the use of assassins to deal with the Kremlin critics.

It’s true that the Russian security services have a very long record of killings abroad, but officially the Kremlin claims that the only targets are “terrorists”, who are described as legitimate targets for extrajudicial death sentences. That’s now changing.

Yet at the same time, there is a part of the recent emigration wave that the Kremlin is very keen to entice back. Maksut Shadayev, the head of the Digital Development Ministry, a young and apolitical official in Vladimir Putin’s government, oversees the development of Russian substitutes to replace sanctioned Western technologies. As part of his mission, he wants to get Russian information technology (IT) specialists back to Russia — those who had fled because of the invasion and mobilization.

That mission became almost impossible after the country started to mobilize all men aged 20 to 50 last fall, which prompted around 100,000 IT specialists to leave Russia. And the country already was short of one million IT engineers, according to the government’s own assessment.

The digital minister’s team is working feverishly on a strategy to lure them  back. The government’s desperation is indicated by the package on offer, including the promise of draft deferment, cheap mortgages, and even free plane tickets to Russia, all taxpayer-funded. Many  of the departees are still working for Russian companies, but remotely. And that means they are still dependent on Russian rules, something Moscow views as a weakness that can be exploited.

Since December, the IT industry has been buzzing with rumors that the option to work from abroad might soon be banned. That same month, the giant tech company Yandex asked employees to return to their offices, including those who had left the country. In January, VK, the Russian tech giant that controls most Russian social media platforms, instructed employees working from abroad to return home or be fired.

IT professionals are only the most visible part of this war-related new wave of emigration, which is easily the biggest Russian exodus of the 21st century.

The strategy towards the Russians abroad is still being developed, but what is emerging seems to draw inspiration from the age of Stalin. No longer does Putin refer to emigration as a de-toxification of Russian society.

Those with technical skills deemed of use for the war effort and the survival of the Russian state at large, are to be lured back with perks and protection. Those in exile who stood against the Kremlin and the war, fall into a special category  — the Kremlin wants them to feel the crosshairs on their backs.