The Western front is the one that matters. 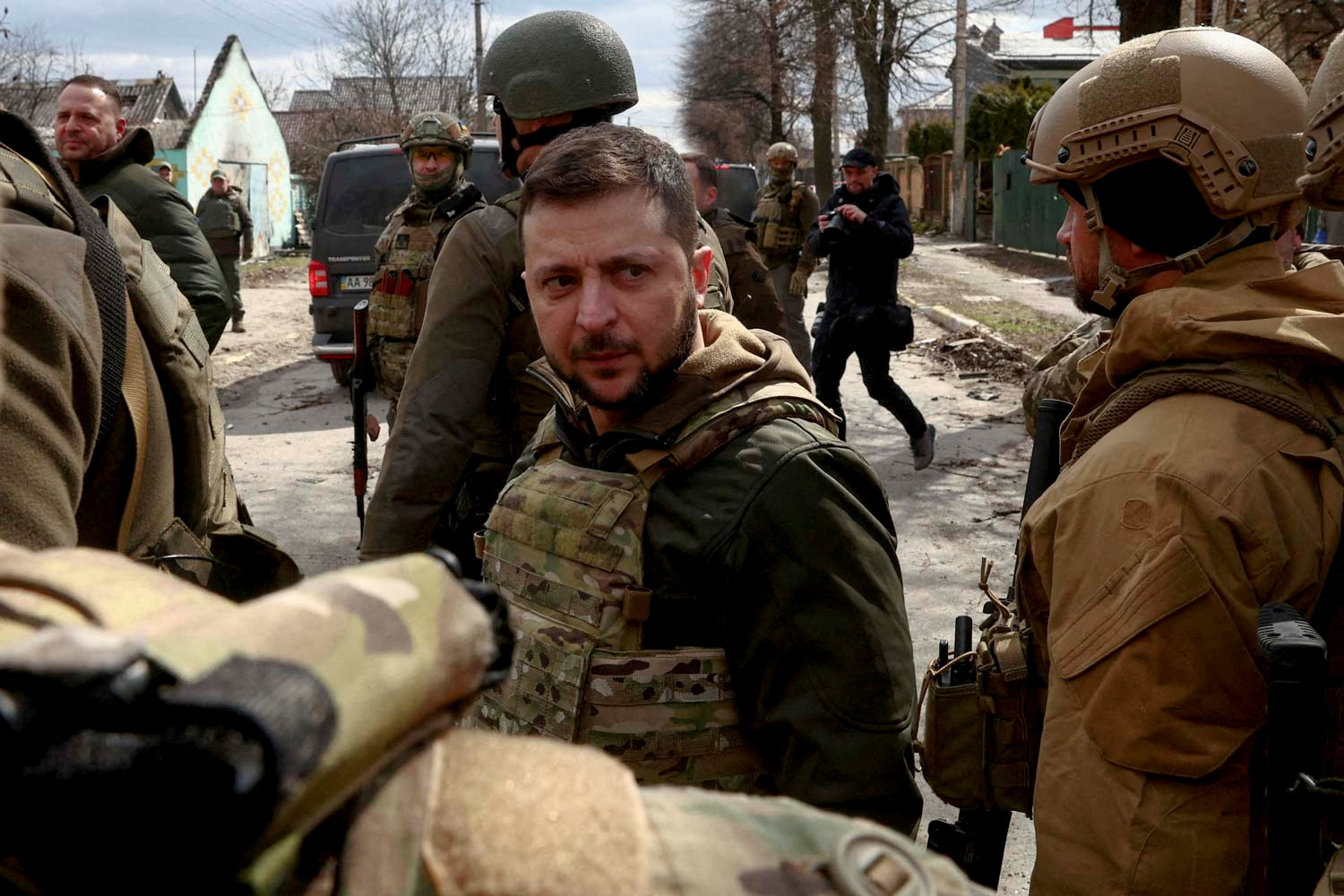 Photo: Ukraine's President Volodymyr Zelenskyy looks on as he is surrounded by Ukrainian servicemen as Russia's invasion of Ukraine continues, in Bucha, outside Kyiv, Ukraine, April 4, 2022. Credit: REUTERS/Marko Djurica

President Volodymyr Zelenskyy’s pre-Christmas trip to Washington, DC, marks a new stage in Ukraine’s patient, exhausting, and still-unfinished education of the outside world. Again and again this year, Ukrainians have confounded expectations. A country divided between “Ukrainian speakers” and “Russian speakers”? Gone. A corrupt, oligarchic state ruling over an apathetic population? Gone. A bastion of Nazi nostalgia? Gone. Amateur soldiers unable to use modern weapons? Gone. A showbiz president hopelessly out of his depth? Gone.

Whereas Ukraine has exploded old stereotypes, on the other side of the frontlines, Russia has been working hard on reinforcing them. Soviet-style militaristic bombast? Again it fills the airwaves. Rumors and jokes as political currency? You bet. Vladimir Putin’s wobbly health fuels speculation and wisecracks, recalling the era of Yuri Andropov and Leonid Brezhnev. Russian behavior in occupied Ukrainian territories revives decades-old memories of the Soviet seizure of power in the captive nations. Again, children are kidnapped and brainwashed, history rewritten, and elites purged. And the occupiers’ primitive behavior in the face of comfort and modernity (looting washing machines) would be comical were it not so horrible in other respects (rape and torture).

A third set of misperceptions has tumbled down too: that Russia is too dangerous to provoke. The initial Western reaction was framed entirely around the need to prevent “escalation.” At first, only defensive weapons could be provided (remember the German helmets?). As the weeks and months pass, the self-imposed red lines shift again and again. We do more. But always too little, and always agonizingly late.

A few diehard cranks on the far right (chiefly in the United States—hello, Tucker Carlson) and far left (mostly in Europe) still cling to their battered stereotypes. The Zelensky visit plays a useful role in keeping them sidelined. But most outsiders are already impressed by the Ukrainians’ epic resolve, just as they are disgusted by Russian brutality. But far too few people in the “Old West” — the big rich countries that never suffered under Communism — are willing to reflect on how badly they misunderstood both Ukraine and Russia. We may agree that this year-long course in geopolitics has been fascinating and educative. But we do not admit how ignorant we were at the beginning, how much we still do not understand, and how much of the course material is written in the blood and tears of innocent people. Note to students: next semester will deal with the question of air defenses and the protection of civilian infrastructure; please study the news of recent weeks in preparation.

Given how wrong we have been, continued Western passivity in the face of Ukrainian appeals for more help is extraordinary. The stakes are enormously high: just imagine how dangerous life will be if Russia somehow wins this war. This is not a conflict of means. It is a conflict of willpower. As the acclaimed Financial Times commentator Martin Wolf notes, the US, EU, British and Canadian economies combined are around 22 times larger than Russia’s. Providing Ukraine with the $60 billion it needs to keep afloat next year would cost just 0.1% of these countries’ GDP (add Japan, Australia, and other allies, and the cost is even less).

The West has the military means to bring the war to a swift end by supplying air defenses and long-range precision strikes. Imagine if every Russian attack on a Ukrainian infrastructure target was followed by a Ukrainian strike on a Russian one. The outside world readily condemns Russia’s attacks on civilian power, water, sewerage, and heat as war crimes — but will not do what is necessary to prevent them. Please submit course assignments promptly.