Despite resistance at home, the government is maintaining a stoutly Atlanticist course on Ukraine. 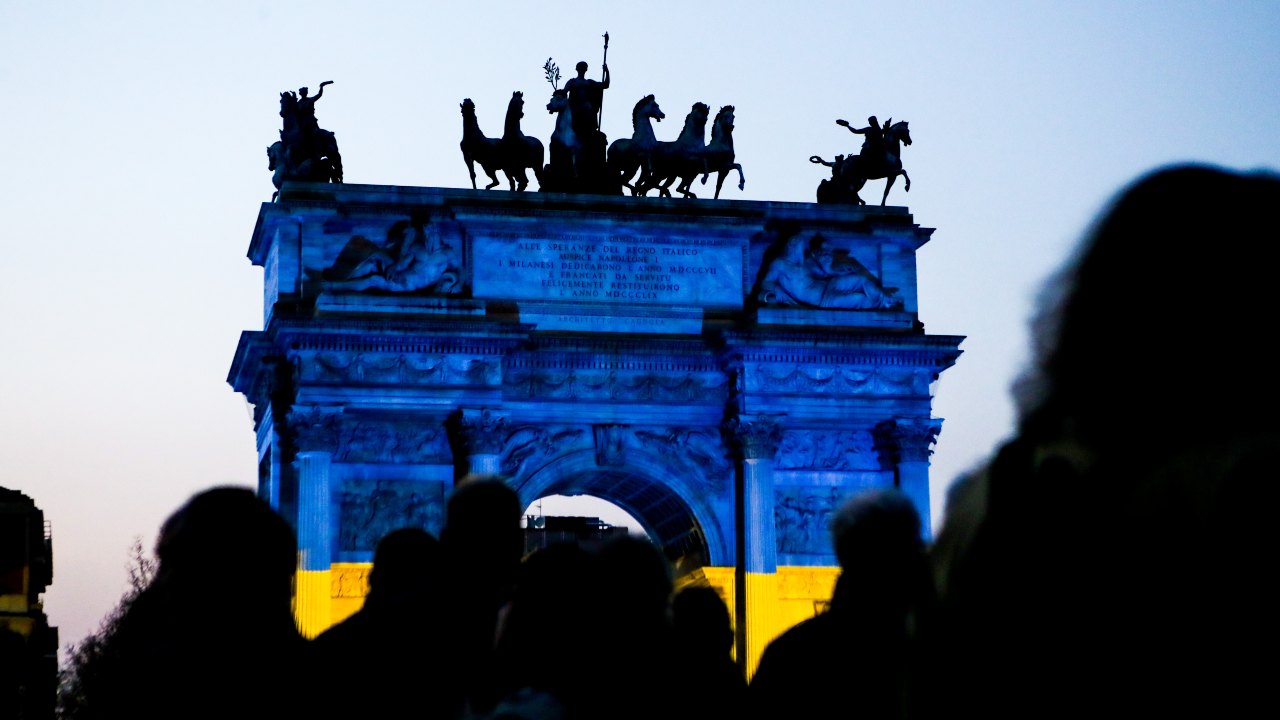 Photo: Demonstration at the Arco della Pace in Milan against the war in Ukraine, Italy, on March 19 2022. Credit: Photo by Mairo Cinquetti/NurPhoto.

Italy’s Prime Minister Mario Draghi has been steering the ship of state through the tumultuous waters of domestic politics and divided public opinion on the war in Ukraine. Faced with domestic opposition and war fatigue, as well as hesitancy within the wider European Union (EU), Draghi’s majority, has struggled to maintain its firm support for President Zelenskyy’s country, especially in terms of lethal military assistance. And yet it is winning the key debates — parliament approved the government’s strategy on June 21.

Draghi’s recent visit to Kyiv, together with French President Emmanuel Macron and German Chancellor Olaf Scholz, was designed to underline support against Russian aggression, an idea emphasized by the prime minister after parliament’s vote. “Only a peace that is mutually agreed and not imposed can last,” he said after some members of a governing party suggested arms shipments be halted.

Draghi, a longtime Atlanticist, has been keen to reiterate Italy’s commitment to Ukraine’s freedom and sovereignty and to demonstrate that Italy is taking a leading role among western European countries. He does so against a backdrop of opposition from parts of the Five Star Movement, one element of the governing coalition, while Italian public opinion is divided on measures to help Ukraine.

The Italian government’s course regarding Ukraine has been influenced by both domestic and international factors. To begin with, Russia’s unjustified attack on its neighbor happened at a moment of unprecedented political transition in the heart of Europe, with a new government in Germany and Emmanuel Macron’s weakened by recent legislative elections (despite his victory in April’s presidential vote.) Such a delicate political landscape in two key EU member states, where pressing domestic issues overlapped significantly with foreign policy decisions, has slowed their response to the war. Scholz is also facing unprecedented economic challenges due to soaring energy prices and supply disruptions caused by the conflict.

Against this backdrop, the joint visit of Draghi, Macron, and Scholz to Kyiv (along with Romania’s President Klaus Iohannis) aimed not only to dispel doubts about the three EU heavyweights’ commitment to Ukraine, but also to demonstrate that Italy is a prominent leader of the EU bloc rather than a symbolic guest. In fact, Italy has been among the most supportive EU countries regarding Ukraine’s bid to join the Union, while Draghi’s rhetoric has been heavily critical of the Kremlin’s reckless behavior, in contrast to Macron’s softer language. As the former head of the European Central Bank, Draghi is also the mastermind, together with US Treasury Secretary Janet Yellen, of the aggressive sanctions package targeting Russia’s banking and financial systems, which has made Russia the most heavily sanctioned country in the world.

None of this has come cost-free. Italy has paid a hefty economic price and there has been significant political opposition at home. Recent polls show that only 47% of interviewees support the sanctions while 67% mentioned the cost of living and higher energy prices as the biggest concern arising from the conflict. According to the latest OSCE estimates, the war’s economic spillover will cut Italy’s GDP growth by more than 2% — with domestic growth now projected down at 2.5%, down from 4.6% — further compounding the pandemic’s aftermath.

Meanwhile, the supply of weapons to Ukraine has been met with widespread public skepticism and mounting political disapproval, most notably from the two major Italian populist parties and coalition members, the League and the Five Star Movement, which have been among the main advocates of a diplomatic approach to reach a ceasefire (along with the Communist Party and some socialists.) The League’s leader Matteo Salvini, known for his sympathies for Putin, even tried to embark on an unscheduled and bizarre visit to Moscow to propose an improbable peace plan but eventually desisted amidst strong criticism from the entire government, including his own party. To be sure, political opposition to sending lethal aid to Ukraine is by no means specific to Italy. There is also opposition in France and Spain, and Germany has been slow to deliver its arms pledges.

And yet, while Italy is highly vulnerable given its substantial reliance on Russian gas (40%), economically it is more resilient than expected. Italy’s exports to Russia, for example, account only for 0.4% of GDP, following a clear downward trend after Russia’s illegal annexation of Crimea in 2014. Moreover, the country has been swift to agree to new energy partnerships, while Russian gas imports are below a third of their 2021 level. Draghi has also used his golden power to block the acquisition of Italy’s Faber Industries, a world leader in clean hydrogen and high-pressure gas storage systems, by the Russian energy giant Rosatom.

When it comes to weapons deliveries, estimates of the value of military support also show that Italy has performed similarly to France. Germany has pledged more but has delivered less than Italy in concrete terms. So far, Rome is thought to have provided Ukraine with €150m ($158m) of heavy machine guns, man portable anti-tank and anti-aircraft weapons, ammunition, and protective gear, which have been sent in two tranches. A new package was pledged by the Italian government early in May and is now being delivered. Although the official list is classified, this third package includes an undisclosed number of towed 155 mm FH-70 howitzers, and, possibly, a stock of multi-role armored vehicles.

Italy’s support represents an important contribution. Although it doesn’t reach the scale of some eastern European countries — not to mention the US and UK — two further aspects are worth noting: first, contrary to Poland or the Czech Republic, for example, Italy doesn’t operate Soviet-type systems such as T-72 tanks or 2S1 Gvozdika self-propelled artillery that could have been easily employed by Ukraine without the need for additional training. This helps explain why other EU heavy equipment deliveries have been slower. Second, most European countries’ military stockpiles cannot be compared to the US. This is why some EU states such as France and Romania are now considering the possibility to increase the production rate of ammunition and artillery systems and get prepared for the long haul.

Clearly, the Italian government’s firm support of Ukraine has taken the Kremlin by surprise and has ended a long phase of bilateral courtship between the two countries. Russian authorities have made threats against Italy, while Russian hackers launched a string of cyberattacks against Italian critical infrastructure between April and May. At the same time, the Kremlin is trying to use well-oiled propaganda and Italian sympathizers to spread dissent among the population and frustrate the government’s policy.

Draghi has battled and succeeded in preserving a majority in the face of substantial obstacles, not least the presence of anti-US and pro-Russia attitudes rooted in a peculiar mix of populist anti-establishment sentiments and far-left nostalgia, compounded by widespread disinformation across Italian media. Italy’s threat perception and its citizens’ entrenched political ideas remain formidable drivers of the country’s foreign policy and help explain Italian voters’ preference for peace in Ukraine rather than justice (52% vs 16%), or their objection to increasing defense spending despite Russia’s attack (63%.)

Thus far, Italy has shown itself a staunch ally, firmly anchored in the Western alliance despite multiple constraints, and is proving essential in keeping the Western European bloc firmly united. The priority now is to preserve this delicate European unity, avoid dangerous u-turns, and ensure support for Ukraine in its struggle for liberty.

Photo: Demonstration at the Arco della Pace in Milan against the war in Ukraine, Italy, on March 19 2022. Credit: Photo by Mairo Cinquetti/NurPhoto.