Years of close personal and business ties between Italy’s elite and Russia are proving resilient even in hard times. 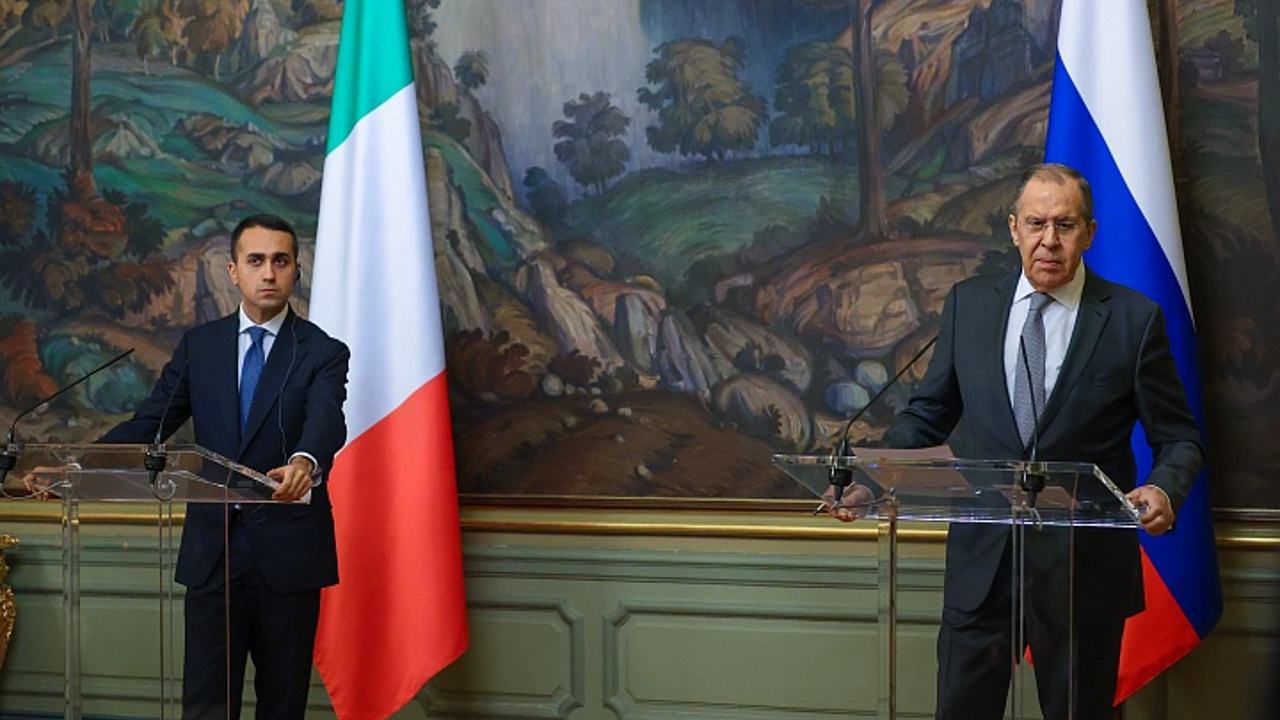 In what was perhaps his first significant public statement in foreign policy, in May 2021, at the end of the Council of Europe, the-then new Italian Prime Minister Mario Draghi — former president of the European Central Bank and the man who with the famous “whatever it takes” is considered the savior of the euro — said, “there are many things that can be done about Russia, first of all, a complete implementation of the Minsk agreements.”

Draghi was touching a nerve in relations between the European Union (EU) and Russia: Russia’s military occupation of Crimea and an increasing intensification of maneuvers by as many as 190,000 troops on the Ukrainian border in full violation of international agreements made through the other Normandy Format countries of France, Germany, and Ukraine. But Draghi was also, and perhaps above all, talking about Italy and to Italy: “We need to strengthen ourselves a lot, especially in terms of cyber security. The level of Russian interference, regarding the spies we have recently seen and on the web, has become alarming.”

Throughout the crisis brought about by Russia’s encirclement of Ukraine — and the failure to withdraw its forces, despite the Kremlin’s declarations, from Crimea, Kursk, Belgorod, or Belarus — Draghi’s position and of the Italian government have become more cautious and nuanced, and ever-closer to the German position.

In a February 15 phone call with Ukrainian president Volodymyr Zelenskyy, the Italian PM certainly expressed Italy’s full “support for the territorial integrity and sovereignty of Ukraine,” but he also spoke of the “common commitment for a sustainable and lasting solution to the crisis by keeping a channel of dialogue open with Moscow.” In a press conference on 18 February, the eve of Putin’s open war on Ukraine, Draghi said of economic measures aimed at Russia: “A package of sanctions is being studied within the EU with the Commission. Certain sanctions have more impact on Italy and less on other countries. All those that indirectly impact the energy market will impact the country that uses the most gas.”

So why is Draghi, an unquestioned European and Atlanticist, so careful, perhaps even nervous when tackling an increasingly authoritarian threat to the continent?

There were signs of a change of tone on February 22, the day after Russia recognized the independence of the breakaway regions it sponsors in eastern Ukraine. Draghi called the Kremlin’s behavior an “unacceptable violation of Ukraine’s sovereignty and territorial integrity.”

Italy’s premier nonetheless faces a very powerful consortium not only within his own parliamentary majority, but also within the Italian government administration, at the Foreign Ministry, and beyond. Sympathizers in these circles consider Italy a “bridge” between the West and Russia. A parade of Russlandversteher (pro-Russian commentators and intellectuals) have a significant presence in universities (such as the LUISS in Rome and the Ca’ Foscari in Venice) and in the media and has its own cultural hegemony through which Italian anti-American populists have been fueled over the years.

The old theory of Giulio Andreotti, the leader of the now-defunct but powerful Democratic Christian Party, is still culturally dominant in the Belpaese, even in its populist season. While many Russlandversteher in Europe are “Eurasianists” (admirers of the far-right thinker Alexandr Dugin’s theories and the radical nationalist initiatives of the pro-Kremlin separatist financier, Konstantin Malofeev), the majority of pro-Russian Italians are moderate and pragmatic, and they practice realpolitik. They believe Russia is an opportunity, not a threat. In their view, the crisis in Ukraine stems from Ukraine’s revolutions and destabilization created by the West. More fundamentally, it is argued that Italy cannot give up on Russia due to its energy reliance.

Throughout January and February, with the risk of a Russian invasion of Ukraine growing, Italian ambivalence was vividly displayed. In February, Vladimir Putin held a videoconference with the heads of the largest Italian companies. Some were public or almost entirely public companies, such as ENI (which did not attend in the end following pressure from the government), ENEL, Terna, and also some private giants such as Pirelli, the Marcegaglia Group, and Barilla. This was the crème de la crème of Italian business, all held spellbound by the words of the Kremlin’s autocrat: it has aroused widespread controversy in Italy.

Italy’s countryside is now sprinkled with properties owned by oligarchs very close to Putin’s circle, some of them former KGB spies. They invest in real estate in Tuscany, Umbria, Sardinia, buy influence, and keep their billionaire yachts on the Costa Smeralda. Few in Italy ask for them to be sanctioned, for example as Alexey Navalny asks from jail.

TG1, the main public news program, aired a report from Donbas in mid-January which seemed so unbalanced as to merit a formal letter of protest from the Ukrainian ambassador to RAI, the Italian public television. The report showed Donbas militiamen claiming (without any balancing statement) that they had a photo of the battle of Stalingrad in the bunker because “today, as then, we are fighting against fascist aggressors.” In the midst of the Kremlin information war, Mediaset channels owned by Silvio Berlusconi, Putin’s great friend who was accused of an opaque economic relationship with Gazprom (see leaked cables from the US embassy in Rome from 2010. Berlusconi denies any wrongdoing.) The channel broadcast a long interview with Russian Foreign Ministry spokesperson Maria Zakharova, one of the most aggressive communicators in Putin’s orbit.

In politics, the situation is little better. On February 16, the day of the alleged Russian invasion that never took place, the comedian Beppe Grillo, founder of the 5 Star Movement and a frequent guest of Russia’s propaganda outlet, RT, published a post by a barely known commentator in his blog. The piece was an untrammeled defense of the Russian position, and demanded the end of so-called Russophobic sentiment. Grillo’s 5 Star Movement — which while waning in the polls remains determined to hang onto its position in the Draghi government — has constantly amplified Kremlin propaganda over the years through its official and unofficial accounts. Grillo’s blog went so far as to relaunch the falsehoods surrounding the MH-17 Malaysian Airlines flight shot down in 2014 by a Russian missile, claiming the plane was brought down by the Ukrainians. Matteo Salvini’s League has continued throughout February to push for dialogue with Russia on the grounds of energy dependence. Italian gas imports from Russia have fluctuated in the last few years from 28% to 30% of the total. He argued that: “In the face of the crisis in the rise of energy prices, it is necessary, among other things, to hope that there will be no war between Ukraine and Russia,” parroting considerations that were also voiced by the former Prime Minister Romano Prodi. The League is also still under investigation by prosecutors for having negotiated direct financing from the Kremlin at the Hotel Metropol in Moscow, for the alleged resale of a batch of gas (Salvini denies any wrongdoing.)

Commentators who speak of “Putin’s wisdom” are not uncommon. In universities, traditional anti-Americanists often criticize the errors and lies of past US administrations, from Iraqi chemical weapons to the recent withdrawal of forces from Afghanistan. In this context, it is therefore remarkable that the latest annual report released by Copasir, the parliamentary committee overseeing the intelligence services, asserts that Italy faces a high risk of infiltration by foreign states.

In December 2018, the issue of foreign interference (Russian in that case) had been completely downplayed. Now, however, the Committee stated that there is a concrete danger that “Russia could exploit this issue [gas] to exert pressure on the EU, using gas supplies as an instrument of tension and asymmetrical warfare.”

The leverage of money, indeed of rubles, to which Italy has been very sensitive in its recent history, remains significant.

Jacopo Iacoboni is an investigative journalist for La Stampa, covering populist parties in Italy (5Star Movement and Lega), cyberwar, authoritarianism in Russia, and the influence of authoritarian states in Italy. His latest book is “Oligarchi. How the Russians are buying Italy” (Laterza, October 2021.)