In Defense of Defense Spending: A Tech Opportunity for Europe

Europe has responded to Russia’s invasion of Ukraine with bold new plans to increase defense spending. A beneficiary should be its tech industry. 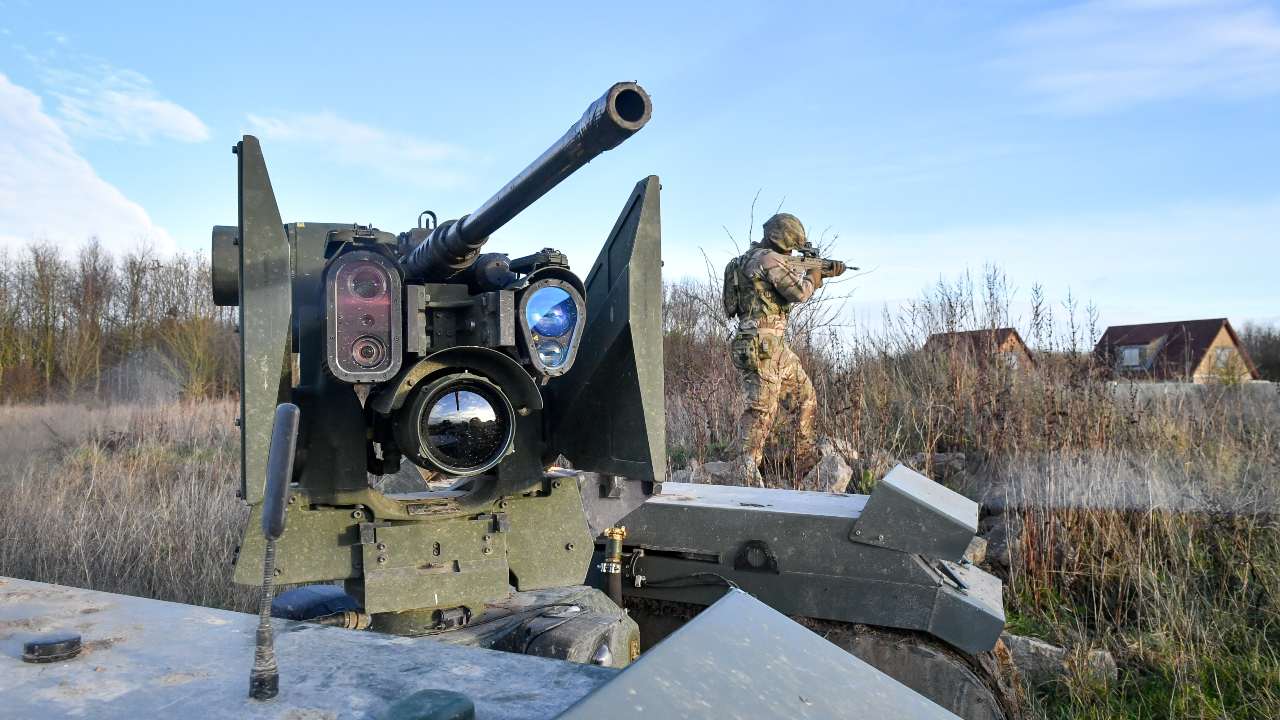 Photo: The barrel and sight equipment on top of a Titan Strike unmanned ground vehicle, equipped with a .50 Caliber machine gun, moves and secures ground on Salisbury Plain during exercise Autonomous Warrior 18, where military personnel, government departments and industry partners are taking part in Exercise Autonomous Warrior, working with NATO allies in a groundbreaking exercise to understand how the military can exploit technology in robotic and autonomous situations. Credit: PA Images via REUTERS

Europe agreed in record time to arm Ukraine – and to increase its own defense spending. The unlocked billions of euros will not just modernize the continent’s militaries. They should also increase its tech competitiveness.

Long underfunded European armies need to spend to make sure their soldiers have working guns and winter clothing. More than one of two German army helicopters are unable to get off the ground. Europe’s defense spending is fragmented and needs to be coordinated continent-wide.

Germany is promising the biggest change. Chancellor Olof Scholtz has earmarked an increase of €100 billion ($112.7 billion) in the 2022 budget for the armed forces and reiterated his promise to reach the NATO-wide target of matching defense spending with two percent of GDP. Denmark, too, has been increasing its defense budget to meet that target.

Admittedly, some signs of backtracking from these ambitious plans are emerging. Germany has signaled that its defense spending increase could be a one-off. Italian Prime Minister Mario Draghi wanted to hike defense spending from 1.4% to 2% of GDP by 2024. But coalition partner Five Stars demanded a slower increase, reaching 2% only by 2030. Draghi compromised on 2028.

But Russia’s invasion of Ukraine represents a watershed, forcing Europe to realize that it must spend on its own defense. A big question is how the extra money will be spent. Some will go towards missiles and bombs – a part of which are being sent to Ukrainians, who can defend themselves. However, and crucially, a large part should support research, which includes fields that are not strictly military-related.

The same engine that’s mounted on a missile can be fitted to a rocket to carry a satellite into orbit. A rescue helicopter has the same basic hull as a combat helicopter. Encrypted communications, originally developed to protect soldiers, are one of the most requested features for messaging apps. From space programs to the Epi-Pen, from smartphones to the microwave oven, dozens of innovations that we use every day owe their existence to military research – especially American research.

When we Europeans dream of a European technological revolution, we forget that the great scientific leaps came from Pentagon projects. The Internet represents a prime example. European tech industries need to benefit from a long-term investor who doesn’t seek an immediate economic return – such as the State.

Governments recruit, train, and employ tens of thousands of men and women in uniform, many of whom specialize in STEM and end up working for these industries. They play a leading role along the entire chain of value: they finance or own the companies, train the staff, including through public universities, buy the products for themselves and negotiate their sale to other States. And they invest in moonshots, the visionary projects that make humanity leap decades.

Unlike Europe, the US has developed a parallel system of financing the technology sector. In Silicon Valley, companies such as SpaceX and Blue Origin partner with the public sector; it is no coincidence that they are aiming at the Moon and Mars, as NASA did in the 1960s.

Some European countries lack this additional growth channel. Investing in a start-up with a long-term perspective. VC funds know that perhaps they’ll see a return on their investment in 10 or 15 years.

Europeans who believe it’s best to redirect the money from military spending to the universities must receive a realistic answer: few European universities are structured to receive or manage large sums of money, nor to be the cog in a complex system in which the public administration, companies, foreign entities, and supranational bodies coexist.

Circling back to defense – and considering the lack of a Silicon Valley-like financial environment – it’s easy to see how government spending is one of the most powerful catalyzers of economic growth. General Luciano Portolano, Italy’s Secretary-General of Defense and National Armaments Directorate, argues that the Italian defense industry has generated €15 billion of added value in the national economy. That’s 0.9% of GDP “with a multiplier of three.” In other words, for every euro invested in defense, the country “earns” three euros.

There’s a lesson here for the US, too. Washington has long opposed European Union defense efforts, fearing a negative impact on US defense companies. Now, however, it’s time to change course, encourage extra European defense spending, and increase European coordination to create European jobs, while investing in research and increasing tech competitiveness.