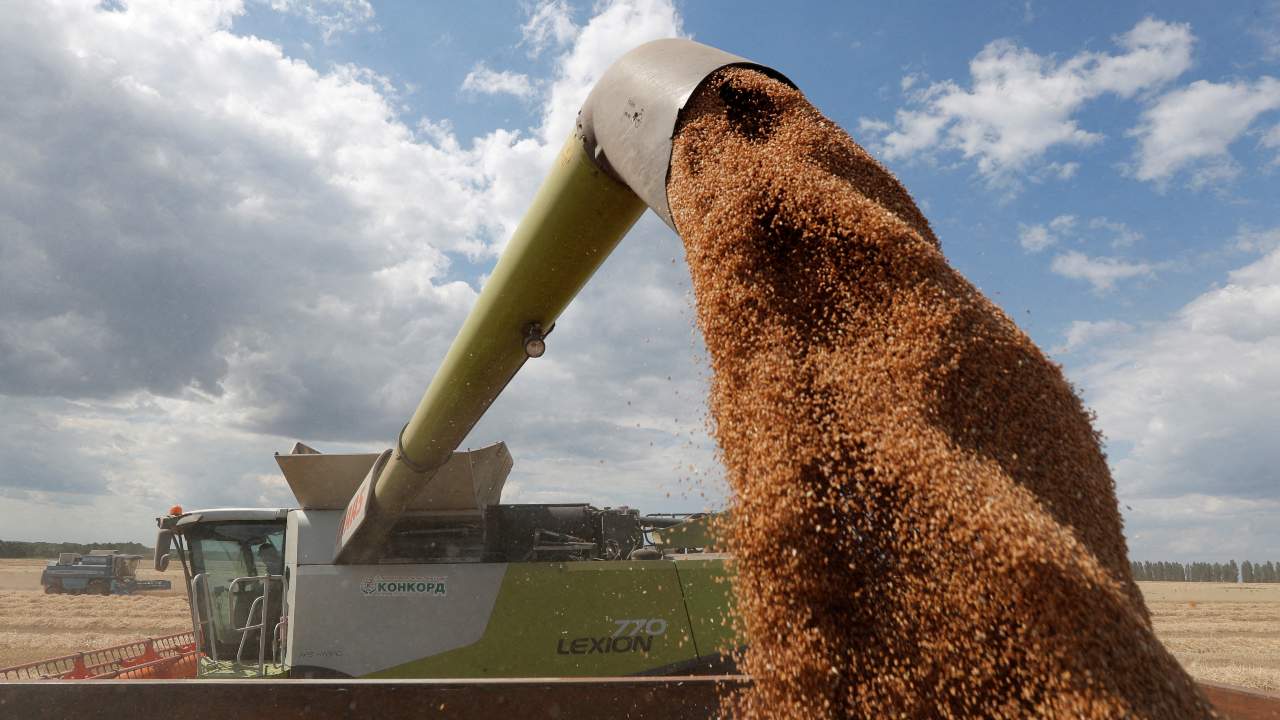 Photo: A combine harvester loads a truck with wheat in a field near the village of Hrebeni in Kyiv region, Ukraine July 17, 2020. Credit: REUTERS/Valentyn Ogirenko/File Photo

Vladimir Putin’s most powerful weapon is not in his military arsenal. It is the threat of migration and unrest provoked by disrupting food supplies to Africa and the Middle East.

Ukraine is the breadbasket of the world. In a normal year, it grows enough food (mostly wheat, maize, and cooking oil) to feed 400 million people. Nine-tenths of that is shipped through the Black Sea. This year nothing is moving by sea, and not much by land. The war has also hit fertilizer exports.

That directly affects 1.7 billion people in more than 100 countries, according to the United Nations. Of these 43 million are on the brink of famine, and 570,000 face starvation.

Rocketing prices, shortages, and hunger in the coming months will make desperate people riot against their rulers and flee. The upheavals will be mighty, the suffering immense. So too will be the political consequences in the West. Spooked by the specter of another migration wave, European leaders may urge Ukraine to sign a ceasefire — any ceasefire — so that food moves and people do not.

Putin tested this tactic already. Russia put pressure on Finland in 2015 by encouraging illegal migration. We saw the same tactic deployed against Poland from Belarus in 2021. Lawless mass migration is destabilizing. It stokes divisions within countries and between them. Those that try to counter illegal border crossings look inhumane. Failure to do is a gift for demagogues.

This will accelerate the end of the shaky pro-Ukraine consensus in the West. At the Lennart Meri security conference in Tallinn earlier this month, the Bulgarian pundit Ivan Krastev said that political strains on European opinion were producing two parties, which he nicknamed “peace” and “justice”. The latter would see Ukraine as the victim of aggression and support the military and other measures needed to support it. The former will (and does) argue that even the worst deal to end the fighting is better than none.

It won’t work. For a start, it is too late. The planting season is disrupted. Ukrainian farms have been pillaged and destroyed by the occupiers. Many of the men are fighting. Many women are in exile. Full reconstruction will take years, not weeks. Famine already stalks Yemen. It will march onwards.

Moreover, forcing Ukraine to surrender to Russia would not bring peace. It will merely postpone the Kremlin’s next military adventure.

During the old cold war, a peacenik slogan was “better red than dead”, meaning that even Soviet rule was better than the horrors of nuclear war. Hawks responded: “better dead than red”. We did not actually want to die. But we believed that a strong deterrent posture — the willingness to use nuclear weapons if attacked — was the best way of staying safe, free, and of course alive. The immediate answer to Putin’s weaponization of hunger is to use military, economic and other means to halt and reverse Russia’s occupation of Ukraine and to open Black Sea freight routes.

It is also worth remembering that weaponized migration works because of the gulf between the rich and poor worlds. Given that Western decision-makers have had thirty unhindered years after the collapse of communism to sort out the world economy and trading system, the blame for this must largely land with them. Instead of reform, they pursued selfish protectionist policies that hobbled poor countries’ growth. Instead of sensible, fair policies on migration and asylum, they created horrible physical and bureaucratic hurdles that enrich people-smugglers.

Countries like Ukraine may rightly complain about short-sighted and disrespectful Western behavior. It will be little consolation to hear that others fared even worse.