The glitz of new and smart weaponry can seduce politicians and institutions, but major wars are still won by industrial mobilization. 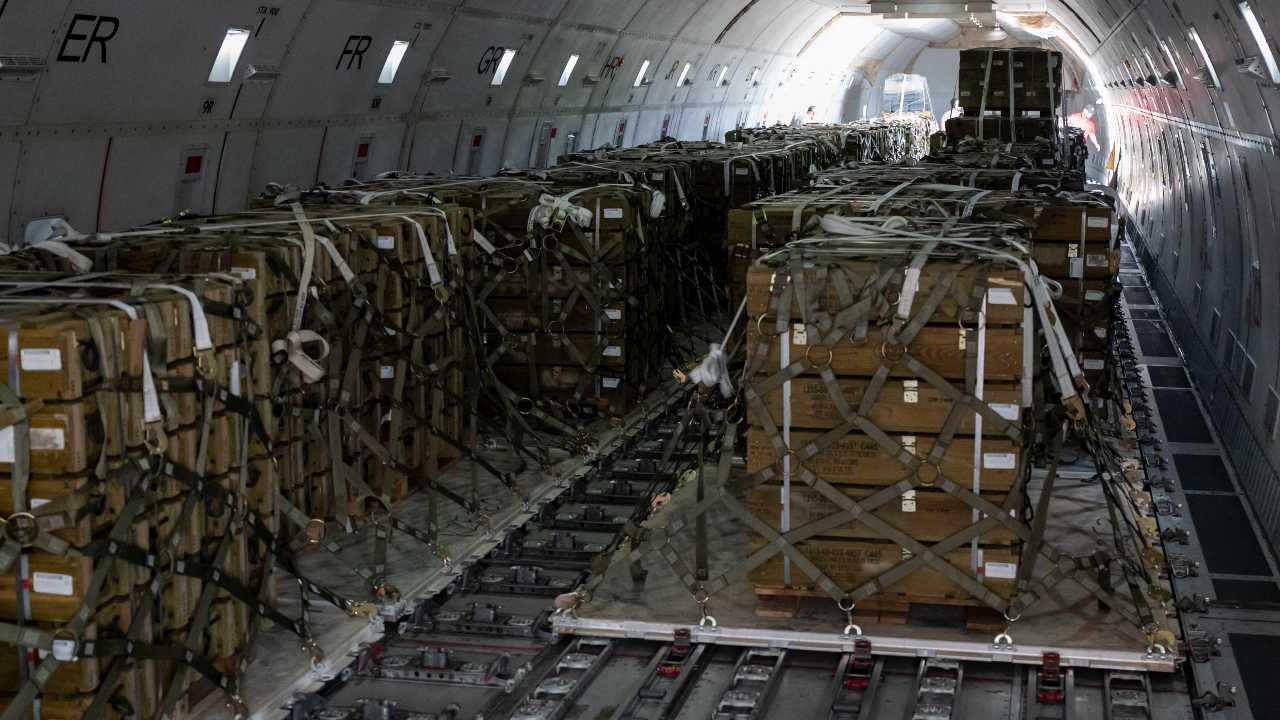 Photo: Pallets of ammunition bound for Ukraine are secured onto a commercial plane during a security assistance mission at Dover Air Force Base, Delaware, July 21, 2022. The Department of Defense is providing Ukraine with critical capabilities to defend against Russian aggression under the Ukraine Security Assistance initiative. Credit: U.S. Air Force photo by Senior Airman Faith Schaefer via dvids.

Since the 1990s, members of the Transatlantic Alliance have relied on innovative technologies such as precision-guided munitions and networked capabilities with their promise to deliver better military effects. The importance of innovation is highlighted in virtually every policy document on both sides of the ocean. Large- and medium-sized powers alike use innovation as a catch-all solution to compensate for diminishing defense budgets and for the lethargy of their defense industries. The European Union (EU), a master in lofty rhetoric and fancy branding, is no exception.

Glamorous tech-based defense projects elicit enthusiasm and are announced with great fanfare by policymakers, service chiefs, and defense industry representatives alike. As the scholar Nina Kollar puts it, innovation makes policymakers swoon and weapons developers salivate. Yet, a thirst for defense innovation can obscure the battle-winning power of mundane and non-revolutionary technologies. As Jack Watling, from the Royal United Services Institute, explains: “The West needs to be much more disciplined about not always chasing the exquisite but instead understanding how the exquisite enables the fairly dull and mundane.”

Of course, defense innovation is as hard to criticize as motherhood and apple pie. All the more so, the EU’s new resolve in encouraging defense innovation (the Commission recently announced a new project termed the EU Defence Innovation Scheme, EUDIS, a €2bn euro — $2.06bn — investment scheme to support innovation and entrepreneurship) is undoubtedly a positive development, especially given that it’s arguable that in no other area of the European defense project has there been so wide a gap between what was promised and what has been delivered. Yet, at a time when there is suddenly more money to spend on defense, it is tempting to prioritize expensive, technologically ambitious projects at the expense of stockpiles of parts from existing systems and munition production.

The Ukraine war shows that the future is here, but that it includes legacy systems for artillery and ground troops because these remain at the core of warfare. Most importantly, the conflict is exposing inadequate Western defense stockpiles — particularly conventional artillery and ammunition. The consumption rates of both are simply higher than military staff had anticipated. “This is an artillery war now,” deputy head of Ukraine’s military intelligence Vadym Skibitsky recently told The Guardian. “We are losing in terms of artillery. Everything now depends on what [the West] gives us,” said Skibitsky.

But Western ammunition stocks are inadequate and militaries are quickly running out of ordnance to send to Ukraine. The Ukrainian armed forces say they are using 5,000-6,000 shells a day. The UK this month announced another 50,000 artillery shells for Ukraine and the US has so far sent more than 300,000. It is perhaps unsurprising therefore that stocks are running low, especially since the established wisdom pre-war was that the West would never fight an industrial conflict again. As a result, almost nobody has maintained the capacity to ramp up national production. But as the Ukraine war shows, and Lieutenant Colonel (rtd.) Alex Vershinin rightly points out, industrial warfare is back and the winner in a prolonged armed conflict between two near-peer competitors is still based on which side has the strongest industrial base. A country, Vershinin explains, must either have the production capacity to manufacture substantial quantities of ammunition or, alternatively, have other manufacturing industries that can be swiftly converted to ammunition production — and the West no longer seems to have either.

Rather undramatically the priority should be to fill the shelves and ramp up the production of mundane military equipment. The EU was surprisingly fast in addressing this issue. On July 19, the Commission announced an EU Investment Tool aimed at replenishing European weapon stockpiles. Specifically, it offered €500m to boost joint weapons purchases among member states, in an attempt to help replace stockpiles depleted by arms shipments to Ukraine. The bloc’s preliminary aim is to incentivize a minimum of three member states to buy weapons jointly, such as artillery, air defense systems, and anti-tank missiles. There have already been instances when some EU member states have purchased weapons together, but this will be the first time that the bloc’s executive body is working to make this happen.

The announcement of this package is a milestone. It inaugurates a role for the EU in the defense industry that goes beyond subsidizing and de-risking defense projects, and signals an increasingly prominent role for EU institutions in regulating the continent’s defense industrial base. Yet, it is vital that this package should not merely be a mere emergency tool.

In fact, so far, the Commission proposal highlights the short-term, contingency nature of the package: the financial commitment will last from 2022-2024 and is primarily designed to aid member states urgently seeking defense products. It is crucial for the EU to make scaling up industrial production a long-term objective of its defense policy. The defense industry cannot be turned on and off with a snap of a finger and attention to the quantity side of the European defense equation will have to be sustained over time. High-quality, advanced technology is still relevant to confront enemies like Russia, but so is critical mass.

The EU is a strong performer when it comes to setting priorities and providing incentives for member state compliance. As one senior NATO official explained: “We can demand higher and higher defense spending all we like, but if that lot [the EU leadership] can’t coerce them into spending it properly, it’s not going to make a massive difference”.

Thus, the EU can and should employ its financial muscle to bring cohesion to the “fragmented national manner” that has for years characterized European defense industrial efforts. Specifically, it must offer incentives to ensure that national defense industries develop a capacity for resupply. If it is true that modern problems require modern solutions, then the return of old-style power politics might likewise require old-style policies. At times of full-scale territorial aggression, it is worth investing in an industrial base that is capable of technological edge as well as being capable of scale.

The EU is well placed and on the right path to foster both. But the tension between old and new will continue to underpin European defense debates. The EU should not let its tech power aspirations as well as desire for high-tech weaponry and lean manufacturing obscure the importance of maintaining stockpiles of basic kit.