Giving Peace (More of a) Chance

What leads countries to start wars and how can they be dissuaded? 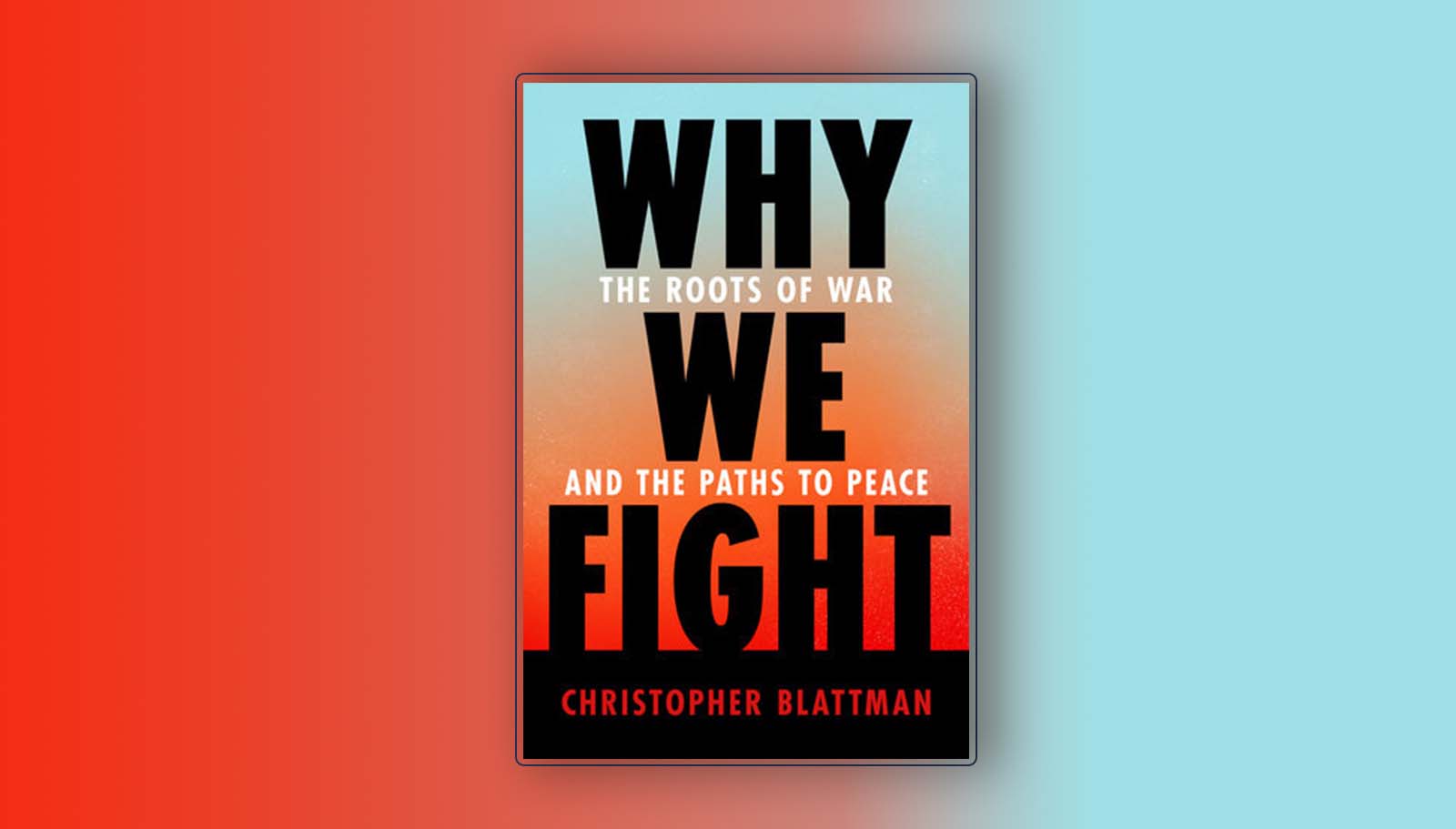 Photo: Cover of Why We Fight: The roots of war and the paths to peace by Christopher Blattman. Credit: Penguin Random House.

Many months of fighting in Ukraine have shown that Vladimir Putin’s special military operation has been a disaster for Russia as well as Ukraine. Why did this usually shrewd calculator commit such a grievous error? A new book, Why We Fight (Viking, 2022) by University of Chicago professor Christopher Blattman, provides a strong framework for considering this question.

Blattman outlines five roots to war and four paths to peace. The potential cost of fighting is the main deterrent to war. But this logic can be overridden by potential material gain for decision-makers and their countries. Ukraine’s mineral resources, nuclear power stations, warm water ports, and wheat fields would add a great deal to Russia’s material wealth. Russia’s military-industrial complex would profit as fighting chews up hardware and munitions. Whatever the enhancement to Russia’s wealth, Putin gets a cut.

Intangibles such as rebuilding the Russian empire and becoming a latter-day Peter the Great were also important for the Russian president. Enhancing these values for Putin helps to offset the costs and risks of war.

Putinism also exhibits an aversion to compromise, which is seen as a sign of weakness.  The former KGB officer may also get a perverse pleasure from violence. He probably enjoys pulverizing civilian dwellings, hospitals, and schools in Chechnya, Syria, and Ukraine; there is demonstrably no aversion to the murder of the innocent.

Putin also seems to have miscalculated the balance of power, making war more likely. Wishful thinking made him ignore signs of weakness in his own forces and underestimate the morale and other assets of Ukrainian forces, as well as the ability and willingness of Western countries to punish aggression.

Finally, there was a commitment problem. It was never clear what Ukraine could or would offer Russia to dissuade Putin from invading. Kyiv never accepted Russia’s annexation of Crimea or Moscow’s recognition of its two vassal republics in Donbas.

In 1914, factors like these congealed and exploded thanks to an extraneous event, the assassination of Franz Ferdinand, presumptive heir of the Austrian throne. Nothing like that triggered war in February 2022. Instead, Putin looked at a swelling tide of challenging developments at home and abroad that, together crossed the threshold of his tolerance for threat.

What factors keep societies from war? Peaceful societies, according to Blattman, manage competition at home and across borders without war. First, They utilize interdependence for mutual gain. As Joseph Nye and Robert Keohane argue, however, interdependence also means mutual vulnerability. Russia’s links with Ukraine exposed Putin’s autocracy to the demonstration effects of democracy. Mutual dependence is no panacea. All the great powers in 1914 were interdependent, but proceeded to destroy their individual and shared prosperity.

Second, checks and balances help preserve peace. A stable society will have many centers. Dividing power and holding deciders accountable can reduce all risks of war, while concentrated power permits tyrants to take and abuse power, as Putin has done.

Third, rules and enforcement can help. As Thomas Hobbes predicted, a Leviathan state can reduce anarchy. Thus, the Pax Romana and Pax Britannia were brutal but outlawed wars in their realms. Russia, like some other states, does not respect laws unless they favor its interests.

Fourth, outside interventions can help — deterring bullies, enforcing bargains, incentivizing, facilitating compromise. Enforcement of existing bans on war such as the UN Charter and the 1928 Kellogg-Briand Pact/Litvinov Protocol comes from nowhere except Ukrainian self-reliance and NATO.

Blattman acknowledges the role played by threats of violence but is nearly silent on nuclear weapons, regarded by many analysts as the main bulwark of peace since 1945, but also as the major threat to civilized humanity.  This silence is not proportionate to the dangers posed by nuclear proliferation or the possibility that Putin could lose his cool.

Blattman’s final chapter is “the Piecemeal Engineer.” Since life is complicated, he warns against hoping for large-scale reforms. Instead, he says, “honor the margins” — strive for small, marginal improvements. This advice contradicts the view that peace in Ukraine requires a decisive defeat of Putin’s forces and regime change in Moscow.

A reader might wonder if any of Blattman’s recommendations could have prevented the “guns of August 1914” or Putin’s attack on Ukraine. The answer, I fear, is no. Informed people in 1914 knew that war would be catastrophic for Europe, but the war began anyway. To answer why leaders opted for war in each case requires answers from psychiatrists rather than game theorists.

Walter Clemens is Associate, Harvard University Davis Center for Russian and Eurasian Studies and Professor Emeritus of Political Science, Boston University. Clemens’s books include ‘Can Russia Change?’ and’ The Republican Virus in the Body politic’ wclemens@bu.edu.