Russia is demanding that NATO break its promise on future membership for Georgia; internal problems and disputes with the West seem just as worrying. 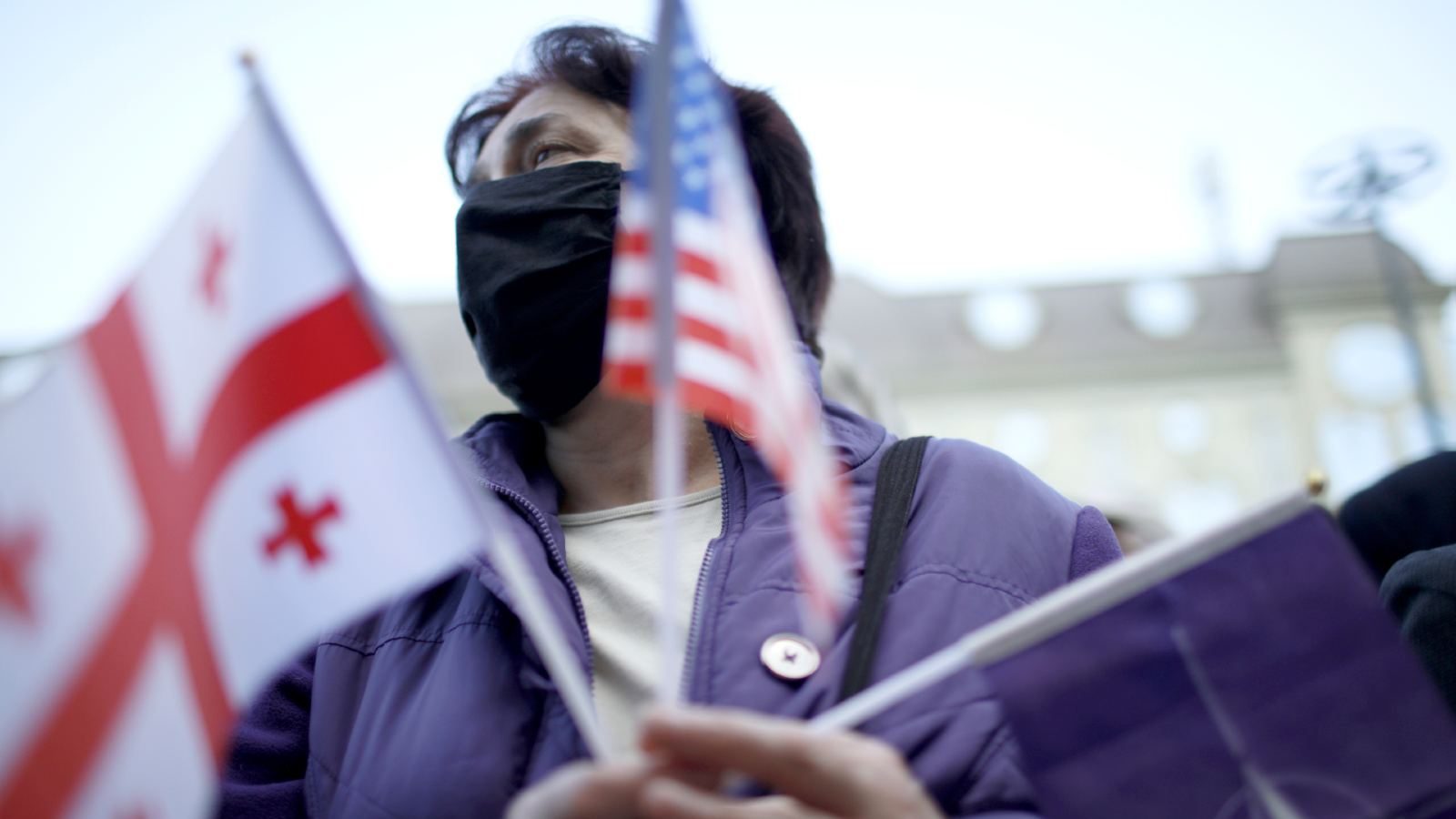 TBILISI, GEORGIA - NOVEMBER 1, 2020: A woman holds Georgian, US and NATO flags as she takes part in a protest against the results of the 2020 Georgian parliamentary election held by supporters of Georgian opposition parties outside the offices of the Georgian Parliament in Rustaveli Avenue. With votes from 97% of polling stations counted, the ruling Georgian Dream-Democratic Georgia Party has won 48% of the vote. David Mdzinarishvili/TASS.

The Russian Foreign Ministry’s doublespeak was palpable. “In the fundamental interests of European security, it is necessary to formally disavow the decision of the 2008 NATO Bucharest summit that ‘Ukraine and Georgia will become NATO members,’” it stated last month.

Although its response was overshadowed in the West by the increasingly menacing Russian military buildup on the Ukrainian border, Georgia’s Foreign Ministry quickly retorted by saying: “Any statement made by a third party regarding the revision of the Bucharest Summit decision, which is contrary to the fundamental principles and norms of international law, is unacceptable.”

Despite Georgia’s reaffirmation of its right to pursue NATO membership, the Georgia-NATO relationship has in reality been a lengthy, and at times confused, saga that has required political engagement from Western allies and a domestic consensus on political reforms in Georgia. But the country has been shaken time and again by political crises, with the ruling Georgian Dream party seemingly drifting further away from an attachment to the liberal democratic system.

There are numerous examples of this illiberalism. In 2019, the leader of the United National Movement (UNM), the parliamentary opposition, was charged with inciting violence during anti-government mass protests. The same man, Nika Melia, was arrested again in early 2021 when police stormed the UNM headquarters. He was eventually released. And when former President Mikheil Saakashvili of the UNM returned to Georgia last year, and was arrested and jailed for a 2018 conviction, he started a hunger strike and was not permitted for weeks to visit a hospital despite his deteriorating condition and international pressure.

European politicians, US senators, and the US Embassy in Tbilisi now openly criticize Georgian Dream’s actions, while some in the US have even called for sanctions against various of the party’s politicians. Georgian Dream has responded with aggressive rhetoric — describing those asking after Saakashvili’s welfare as “biased towards criminals.”

The roots of the US-Georgian relationship go back to the period after the 2008 war with Russia. The two countries signed a strategic partnership document, which laid out cooperation in defense and security issues (seen as key by a recently defeated Georgia) but including commitments to democratic norms (seen as a non-negotiable corollary by the US) like “strengthening the rule of law and respect for human rights.” These pledges were reinforced by both countries in a 2019 joint statement.

So far, the war of words between Georgian Dream and Western officials has yet to have policy consequences, but if Georgia’s political crisis deepens and its democracy erodes, it could highlight these baked-in contradictions. This is unlikely to play out in Georgia’s favor. The country’s leaders may feel confident that they can continue to deepen security assistance and cooperation, but may be underestimating the US commitment to liberal political reforms. As talk of US retrenchment grows louder, this may become an increasingly salient point; the truth is that Georgia — and the South Caucuses as a whole — are not high on the list of US priorities and that assuming continuing engagement might be unwise.

A rift between Georgian Dream and the West would likely also affect Georgia’s stated foreign policy of reasserting territorial sovereignty over Abkhazia and South Ossetia, the two separatist regions occupied by Russian forces since 2008. The US and Europe remain the only geopolitical actors supportive of this goal, and without Western resolve and political support, it will become even more elusive. The dissonance between domestic politics and security goals are a recipe for top-level policy incoherence.

Georgia could of course abandon a full-blooded pro-Western foreign policy and instead take a less confrontational stance towards Russia, while maintaining trade goals with the US and EU. Although this might seem appealing to some factions, this presents its own problems.

First, Russia will not tolerate any Georgian security cooperation with the US or NATO, especially not as competition between Russia and the alliance in the Black Sea Region continues to sharpen. Even if it does not use military force to punish Georgia, Russia maintains major economic leverage and is a significantly larger trading partner than the US or any EU nation. Russia has used this leverage in the past by placing an embargo on Georgian wines. Second, Georgia will be no closer to reasserting territorial sovereignty over Abkhazia and South Ossetia. Third, it is doubtful that Russia will stop flooding Georgia with anti-Western disinformation or cease its interference in the Georgian political process. This problem will be made more severe by Georgia’s internal political instability. This last point is all the more pertinent given how Russia was able to use the domestic upheaval in Belarus to increase that country’s subservience to Russian interests. And as demonstrated by the January uprising in Kazakhstan, Russia will use events towards its own ends.

Ultimately, the West will have to balance the twin aims of a better-defended Georgia with its hopes for a liberal democratic Georgia, especially as competition in the Black Sea region between NATO and Russia sharpens.

That may require choices as to which matters more to each side. Is Georgia’s permanently squabbling elite willing to abandon the politics of winner-takes-all power struggles, or is the West willing to tolerate democratic backsliding in order to win the bigger prize of a strategic ally?

Western policymakers and Georgian politicians will need to better understand each other’s expectations. Sadly, as the long saga of Georgia’s relationship to NATO demonstrates, this has not often been the case.

Jeremy Lennon is an intern for the Transatlantic Defense and Security Program at the Center for European Policy Analysis. He is interested in US foreign policy, transatlantic relations, and security and development in the former Soviet Union.