The situation in Western and Central Ukraine has for now stabilized; a trip to Kyiv provides those interested in international affairs with a unique opportunity. 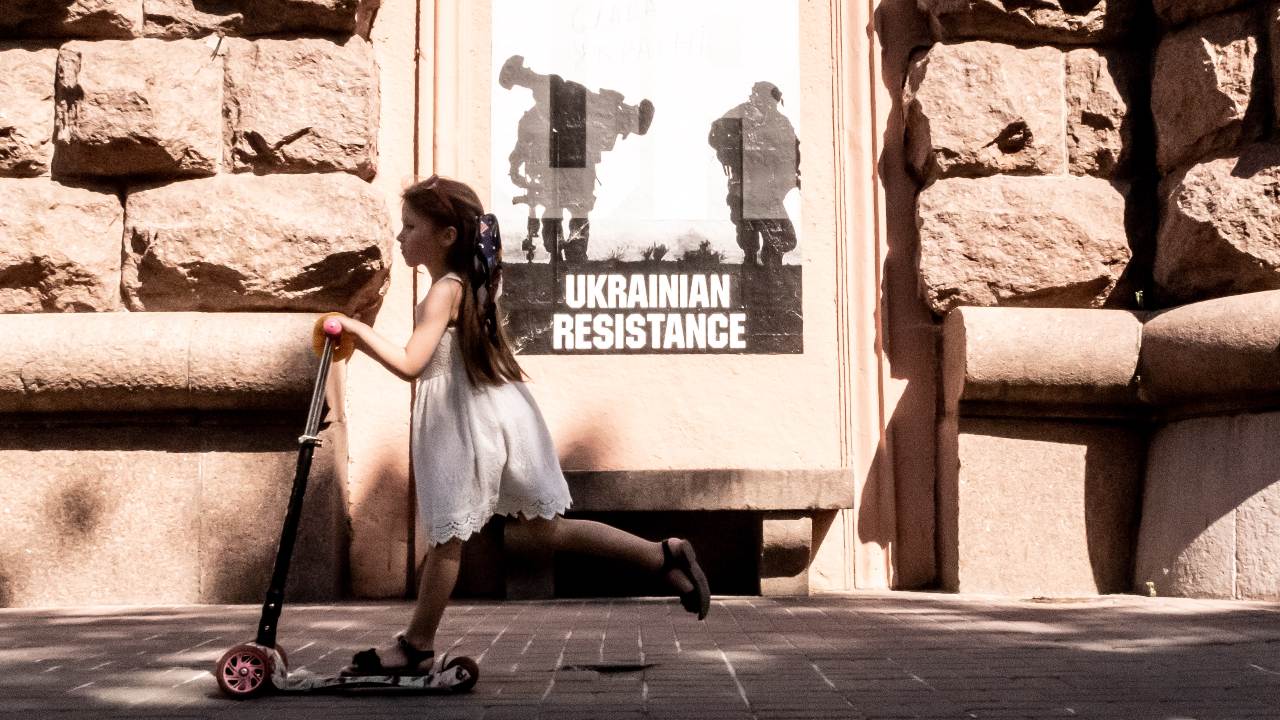 Photo: A girl passes by a poster with a sign "Ukrainian resistance' in an Old Town of Kyiv, Ukraine on June 8, 2022. As the Russian Federation invaded Ukraine 3 and a half months ago, fierce fighting continues in the East of the country. The capital, Kyiv stays in relative safety, though reminders of the war such as protective sand bags, road blocks, national and anti-war symbols are present all over the city. Credit: Dominika Zarzycka/NurPhoto

Back from a two-week visit to Kyiv, I recommend those interested in history and politics to visit Ukraine’s central and western regions. Be in no doubt, this carries some risks, be your trip private or professional. But going to a war-torn country is more than extreme tourism; it allows a close view of what’s happening and shows solidarity with a people enduring Europe’s most important war since 1945.

First, a health warning. Above all, Russia is unpredictable in its approach to Ukraine. Those Ukrainian regions that are today relatively peaceful may tomorrow be under attack. Visitors might, as has happened already to some foreign civilians, be killed or maimed. Worse, Russia may, at some point, decide to use radioactive material or chemical agents, as it did on British soil in 2018, to kill presumed enemies of Putin in Ukraine. If you go there, you could become shot, wounded, poisoned, infected, or/and trapped.

Yet my feeling in Kyiv in late July and early August was that the likelihood of being involved in a road traffic accident was much higher than being hurt by shrapnel or dying in a collapsing house. In fact, wartime Kyiv was surprisingly similar to the peacetime Ukrainian capital where I lived for 17 years. To be sure, the mood and rhythm of the city are different from pre-war times. There is more poverty visible on the streets, a curfew between 11 p.m. and 5 a.m., and the occasional wailing siren to contend with. But explosions and killings are rare exceptions in Kyiv as well as in Western Ukraine. Ukraine’s capital enjoys a good air defense system that takes down most Russian missiles trying to reach the city. And while one can feel the tension in Kyiv, as everywhere in the country, the actual war is absent from the city. Instead, Kyivans are trying to recover some normality and even certain daily joys.

The public transportation system is less heavily used than it was, but the metro works during the daytime with a limited schedule (and stops during air raid alarms.) Taxi services are fully functional again. Prices in the national currency, the hryvnia, have risen sharply since the start of the war. However, foreign visitors benefit from favorable exchange rates for hard currencies and will thus find most services and goods to be relatively cheap. Banks, money machines, private hospitals, pharmacies, and most shops operate in largely regular ways. The streets in the city center are filled with people and cars. Flowers, drinks, and ice cream are sold on popular pedestrian routes.

Most hotels and some daytime bars operate as normal. Numerous websites offer affordable rooms and flats across the city. Restaurants are open again. Many serve inexpensive high-quality meals, a variety of wines, liquors, and cocktails, as well as imported and locally brewed beers. In particular, the dozens of Georgian restaurants that have in recent years opened across Kyiv continue to serve extremely good Caucasian cuisine for relatively small sums. Several beaches on the wide Dnipro River are open for free-of-charge swimming. Fishing is as popular as ever. My traditional Thai Massage shop was open again, although the original Thai masseurs have been replaced by local specialists.

Whereas gasoline was a problem during the first months of war, supplies now seem stable. After shortages in March and April, the range of choice in supermarkets has largely recovered and now offers again almost everything needed for daily life. Police and soldiers are numerous on the streets and some parts of the government district as well as the two central metro stations in downtown Kyiv are closed off. You may occasionally be asked to show your passport at a checkpoint. But the atmosphere is friendly and semi-relaxed. Summertime Kyiv is no longer a raving party city, as it used to be until 2014 when Russia’s war on Ukraine started. Yet, it is a European capital especially worth visiting and exploring today.

For those interested in geopolitics, historical matters, Eastern Europe, military affairs, and international relations, Ukraine has become a unique travel destination. One can observe history in the making and see at firsthand one of the most consequential post-war confrontations of the continent playing out. Nevertheless, in cities like Lviv and Kyiv, one continues, at the same time, to enjoy most of the joys of modern life. Visitors are going to the locations of Russia’s war crimes near Kyiv, at Bucha or Irpen, and Kyiv’s city center has several open-air exhibitions related to the war. This includes an assembly of destroyed Russian war machinery, with a tank, self-propelled howitzer, and APCs displayed in front of the foreign affairs ministry building on Mykhailyvskiy Square.

Of course, reaching the Ukrainian capital is harder, as there is no longer any civil air traffic However there are several train and bus routes operating from cities like Warsaw and Prague. You may have to do a stopover stay in an East-Central European city before getting on a train or bus directly headed for Kyiv. This underlines that visiting Ukraine is no longer plain fun; it is travel the old-fashioned way. However, if you want personal experience of a European country bravely and often humorously struggling to secure its future, there is nowhere like it.

And unlike most other trips you undertake it has some larger meaning. By visiting Ukraine, you show the world what you stand for. By going to Kyiv, you bring some hope, support, and money to the Ukrainians. Your mere presence will signal to East Europeans that Ukraine’s cause is not lost. And while Ukrainians, Belarusians, and Poles may not see you as a hero — they have bigger problems to deal with — they will be grateful that you have taken a position and took some personal risk to express it. Last but not least, Putin & Co. will not be amused.

Dr. Andreas Umland studied political science and history in Berlin, Oxford, Stanford, and Cambridge. He has been a lecturer at the Department of Political Science at Kyiv-Mohyla Academy (NaUKMA) since 2010 and an analyst at the Stockholm Centre for Eastern European Studies (SCEEUS) of the Swedish Institute of International Relations (UI) since 2021.