A belated but welcome Western response to Russia’s active measures. 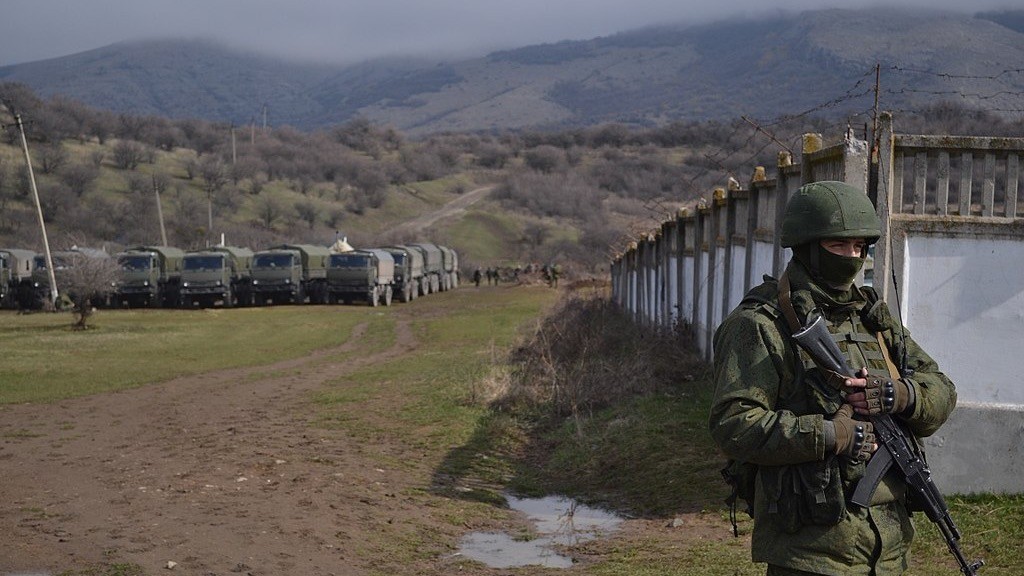 Image: Military base at Perevalne during the 2014 Crimean crisis. Credit: Anton Holoborodko.

The Kremlin takes an imperial approach to Russia’s borders. Woe betide those who try to break away (Chechnya), loosen ties with the center (Tatarstan), or protect indigenous language and culture (Mari-El).

Other countries are different. One of the main tactics in the Kremlin’s active-measures arsenal is stoking separatist sentiment abroad. This started as the Soviet Union was collapsing and has continued ever since. Results include breakaway enclaves in Georgia and Moldova, the insurrection in Ukraine’s Donbas, and the seizure of Crimea. Less-successful efforts further afield include fostering advocates of independence for Texas and California.

Thanks to an intelligence report leaked to the New York Times, we have recently learned details of Russia’s attempts to break up Spain by fomenting separatist sentiment in Catalonia. To be clear, Catalan nationalism is not a Russian invention. It stems from deeply held historical grievances, aggravated by the often heavy-handed behavior of Spain’s centralist government. But it also offers fertile ground for outside mischief-making. In 2019 Josep Lluis Alay, a senior adviser to Catalonia’s self-exiled ex-president Carles Puigdemont, traveled to Moscow and sought help from current and former Russian decision-makers to bolster Catalan independence in banking, telecommunications and energy, and to create a secret pipeline for financial aid.

Despite both sides’ efforts, nothing much happened. The current Catalan leadership has distanced itself from the Russian gambit. And the story is not wholly surprising. I heard privately from Catalan activists several years ago about Russia’s efforts (firmly rejected, they stressed) to befriend them. I have also investigated Russia’s attempts, equally unsuccessful, to woo Scottish nationalists, via a dodgy bank and a football club.

The really striking bit of the story is not what it reveals about Russia, but how it exemplifies the new Western counterattack. In the past Western intelligence agencies might have picked up such behavior by Russian spooks and goons, but they would have done little about it. The two big constraints were fear of harming business ties with Russia, and a reluctance to give any details of secret work by the security and intelligence agencies.

That has changed. Western patience with the Kremlin is exhausted. So too are hopes for productive trade and investment ties. Moreover, intelligence services are getting smarter about using the information as a weapon. In the past, secrets smoldered on politicians’ desks. Now they blaze to life in the media.

Compounding the problem for the Kremlin is the sleuthing of open-source investigators like Bellingcat. Meticulous use of search engines and databases lifts the curtain on what once would have been impenetrable secrets, such as the real names of intelligence officers.

As a result, if Russia tries to help separatists (or far-left or far-right forces) in a target country, someone — inside or outside government — will notice. The news will leak out. The recipients of the Kremlin help will have questions to answer.

The Russians sending it can no longer count on impunity either — as recent events in Switzerland indicate. Vladimir Klyushkin, a cyber-security tycoon with close Kremlin ties, was arrested in March when he arrived (by private jet) for a skiing holiday. The United States is seeking his extradition, ostensibly on insider-trading charges, but — a new report in the London Times suggests — perhaps also because of his alleged association with Fancy Bear, a GRU unit that carried out Russia’s hacking-and-leaking attack on the US political system in 2016.

The twin threats of extradition and exposure are the beginnings of a systematic Western response to Russia’s active measures. Plenty more remains to be done, particularly in expanding the toolkit to deal with the often subtler threat from China. But it’s a welcome start.