There is a new dividing line across the Continent, much longer than the old Iron Curtain and very different in defensive needs. 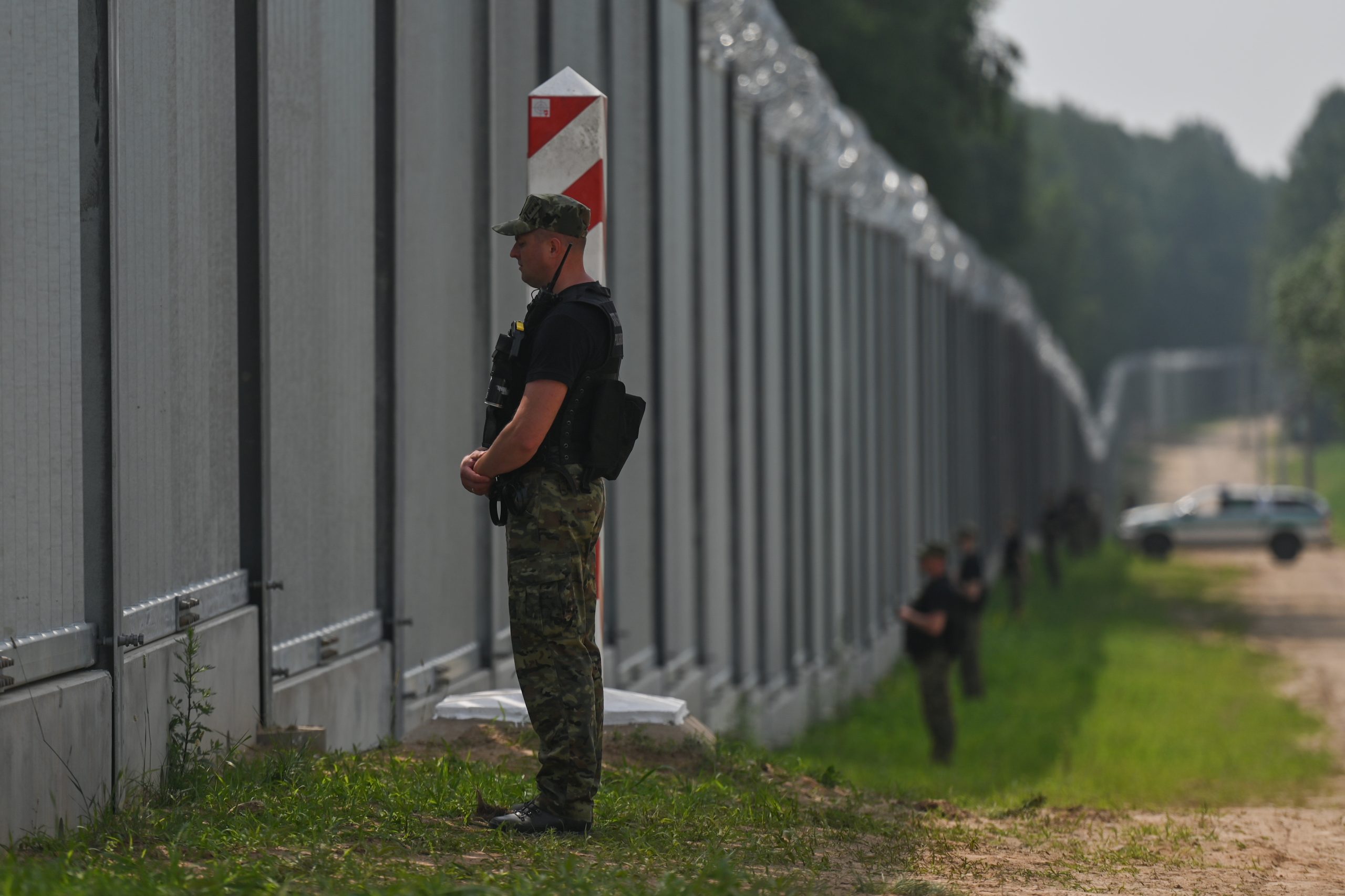 Photo: Polish border guards near the new fence on the Polish-Belarusian border near the village of Nowdziel. Credit: Photo by Artur Widak/NurPhoto

The sabotage of the Nord Stream pipelines in the Baltic Sea on September 26-27, along with what looks to be a long war as Ukraine fights against Russian invaders, are together symbolic of vast changes taking place in European security, changes for which Western leaders need to be better prepared.

The gas pipelines were long seen by critics as a Trojan Horse, but only now do leaders like the European Union (EU) foreign policy chief, Josep Borrell, lambast the Continent for allowing its security and prosperity to become decoupled, even as US critics warned of the risks. The umbilical cord from Russia to Germany, which by design circumvented Central and Eastern European states, locked Europe’s two largest powers in an unholy embrace; they enriched Russia by enabling it to export one of its few world-class commodities, while at the same time neutering Germany’s — and  NATO’s — geopolitical options. This gave Vladimir Putin the confidence to move on Ukraine.

He was right to judge that Russia’s 2014 annexation of Crimea and its invasion of Eastern Ukraine would not wake Western Europe. Only in 2022, when the truth and the extent of Russian aggression became undeniable, was there a response. And this has changed everything.

Very late in the day, the West has raced to help Ukraine defend itself against Russia and has for all practical purposes made Ukraine a de-facto NATO member — unsurprising when defensive war is NATO’s purpose when deterrence fails.

The result is that Europe is once again divided into two hostile blocs in some ways reminiscent of the Cold War. Yet this division will be very different from the situation up to 1989. Armies and equipment are once again being deployed to deal with further Russian malign activity.

Now, Ukraine and nine other current or future NATO members will share borders or be exposed to Russia through a shared coastline on the Black Sea, where Russia deploys a fleet. This is developing amidst the largest European war since NATO was founded, along with threats of nuclear war, and while NATO is both expanding and re-arming from a dangerously low base.

The term Iron Curtain was, of course, Winston Churchill’s in his March 1946 speech describing the post-war division of the continent “from Stettin in the Baltic to Trieste in the Adriatic.”

The extent of its successor is different. Today, the new military line of demarcation runs south from the small town of Vadsø, in the far north of Norway — close to and opposite Russia’s Murmansk region on the edge of the Arctic Circle — to a point east of Hopa, a small Turkish Black Sea community close to the border with Georgia. This is the frontier that will place nine NATO allies on the borders of Russia and Belarus

From north to south, these nine countries are:

This frontier extends more than 4,800 miles, far exceeding the length of the old NATO-Warsaw Pact line, indeed exceeding the width of the continental United States.

This quasi-NATO border, which is already being fortified, plunges at its northern starting point through the dense forests of the Karelian region spanning the nearly NATO state of Finland on its border with Russia. It then follows a line lying 125 miles from St. Petersburg, passes very close to Lithuania’s capital, Vilnius, and even comes to within about 250 miles of Moscow.

And given the extent to which the Black Sea is effectively a Russian lake on which Russian-Ukrainian combat has already occurred, this new border has to take into account the coasts of NATO members Romania, Bulgaria, and Turkey.

Recall, too, that like Ukraine, eight of these other countries were once subject to Tsarist or Soviet rule, making them sensitive to Russian aggression. Eight of these 10 countries are NATO members, another (Finland) will soon be a member, and the 10th is Ukraine, whose armed forces have been trained by NATO since 2014 and have since the war been energetically supplied by NATO members.

The most significant strategic fact of this line is that it is the third iteration of an East-West dividing line in modern Europe, and each iteration has moved further east. The original Cold War frontier sat in the middle of a now-united Germany and ran along Italy’s eastern border. Until 1955, it divided even Austria in half.

Churchill said in 1946 that behind the Iron Curtain “lie all of the capitals of the ancient states of Central and Eastern Europe,” naming Warsaw, Berlin, Prague, Vienna, Budapest, Belgrade, Bucharest, and Sofia. These states were forced to join Moscow’s Warsaw Pact, but they also served to buffer the spaces between NATO and Russia properly. With the exception of Belgrade, where some Serbian leaders still seek a close relationship with Putin’s Russia, all of these countries are now firmly anchored inside NATO. If Ukraine is included, the new line moves NATO beyond the historical boundaries of Eastern Europe – which consists of Russia, Belarus, Moldova, and Ukraine.

And Ukraine’s easternmost border sits about 100 miles further east than even the Kremlin. This means that if Ukraine expels the Russian occupation troops and eventually joins NATO, Europe’s “Western” military alliance would extend to a point a little more than 300 miles from the western edge of Kazakhstan. Even more intriguing, Kazakhstan and its Central Asian neighbors, also once ruled by Moscow, have put a clear distance between themselves and the Kremlin over the war.

Yet this division of Europe is not entirely driven by NATO or considerations of defense. For example, new gas pipeline networks are being built to supply Europe and circumvent Russia, including new lines connecting Greece and Bulgaria, a line transporting gas from Norway to Poland and its neighbors, another linking Poland and Slovakia, as well as a proposed gas line linking Poland to the Czech Republic. Electricity networks are also being reorganized to fit the new political reality. Consider, too, the new Rail Baltica railway line that will decouple the Russian-gauged railways of the three Baltic republics from Moscow’s rail network, creating a new north-south line running through the Baltic states from Helsinki, Finland, to Warsaw, Poland. This railway line will run parallel to the new north-south military frontier.

Much more work will be needed in the coming years. The entire 4,800-mile border will require a serious and sustained effort to monitor and protect it. While Russia’s dismal military performance might appear to mitigate the risk to nearby NATO members, military redeployment and the arrival of alliance troops and equipment are already underway.

Other risks remain, not least a repeat of the weaponization of developing world migration, which has been a favored tool of both the Belarusian dictatorship and Putin’s regime. In October 2021, 12 EU members — including five of the 10 states exposed to Russia — asked the EU to update its rules for the Union’s external borders to allow for physical barriers. Not waiting for the EU, Estonia, Norway, Poland, and Ukraine erected barriers on their borders with Russia and Belarus totaling 1,550 of the 4,800-mile line dividing Europe.

NATO’s 30 members comprise almost one billion people, one-half of the global GDP, and six of the world’s 10 largest economies. With two more prosperous countries — Finland and Sweden — set to join the alliance, its combined GDP will be $45.6 trillion, compared to $1.8 trillion for Russia and Belarus.

United, there is almost nothing NATO’s members cannot accomplish. Putin’s Russia has provided both a compelling reason and a sense of urgency to demonstrate that unity through joint action.

Kevin J. McNamara is Managing Director of the Botstiber Institute for Austrian-American Studies and an Associate Scholar of the Foreign Policy Research Institute.  He is the author of Dreams of a Great Small Nation: The Mutinous Army that Threatened a Revolution, Destroyed an Empire, Founded a Republic, and Remade the Map of Europe (New York: Public Affairs), a narrative history of the dramatic events of World War One and the Russian Revolution that led to the founding of Czecho-Slovakia. Any opinions expressed here are his own.