Europe, Defend Yourself (and the US Will Help)

Greater European responsibility for defense can further the interests of the transatlantic alliance in both Europe and the Indo-Pacific. 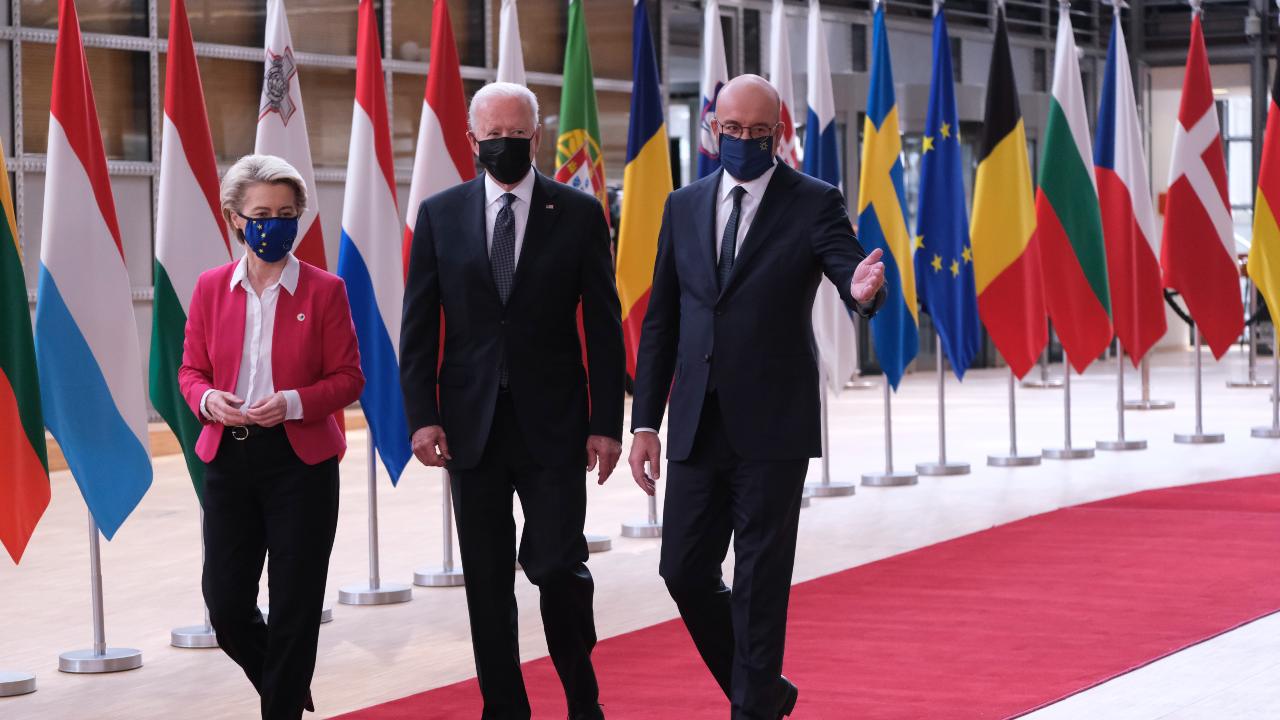 It is a time for careful transatlantic thought before what looks like a coming storm. As Russia threatens what could be the bloodiest conflict in Europe since World War II, the alliance has issued its NATO 2030 paper, adapting the organization to deter conflict in the next decade. But allies on both sides of the Atlantic need to do more, and quickly, to increase European involvement in security strategy.

The Kremlin continues to pile up forces and sustainment networks on the border with Ukraine, intensifying its illegal seven-year-long campaign. Yet the US remains determined not to be distracted from its grand strategic goal — an unwavering focus on China, while Europe, as ever, is fixated on soft power and a desire not to upset Russia. And while the Biden administration has made the right noises about the need to support Ukraine, it hasn’t done very much beyond words. For example, an appeal for additional arms has so far gone unheeded.

Yet there are opportunities here. This now tiresomely familiar dissonance between the US and Europe would be far less worrying if the transatlantic alliance took a fresh look at European Strategic Autonomy (ESA) to encourage Europeans to finally accept more responsibility for keeping the peace in their own backyard. It is time that the US won greater flexibility as a supporting arm of the orchestra, rather than its decades-old role of providing the conductor and most of the musicians.

This is not to replace or displace NATO, but to move beyond the diplomatic and semantic hurdles that have historically limited ESA.

Since first appearing in official European Union (EU) documents nearly a half-decade ago, its biggest champion has been French President Emmanuel Macron, whose admonition that NATO is “brain-dead” prompted not only a major review of the alliance, but accelerated discussions about a more Eurocentric approach to continental security. EU High Representative Josep Borrell and other senior EU officials have supported Macron’s view, although they rarely mention Central and Eastern Europe (CEE), focusing instead on crisis response capabilities for regions that are a lower priority for the US and a higher priority for France and western Europe, such as Africa’s Sahel region.

In recent months, ESA has gained momentum. The Biden administration has expressed support. Borrell and EU defense ministers initiated discussions on a new 5,000-strong rapid response force. Germany, Finland, the Netherlands, Portugal, and Slovenia launched an initiative to expand and better equip existing EU battle groups. Meanwhile, A French-Greek defense deal reached in September was described as the first step towards ESA. The chaotic withdrawal from Afghanistan and the Australia-UK-US (AUKUS) deal have accelerated European — and particularly French — concerns about overdependency on the US, leading to new US-French joint security “reassurance” initiatives. Broadly, many Europeans agree with enhancing European capabilities in the light of changing US strategic priorities.

But ESA also represents an irony. It placates proponents of stronger European defenses and increased the US focus on China. But it also frustrates Atlanticists, who view transatlantic relations as central to strategic competition, and ESA as potentially edging out the US in Europe. It means different things to different people.

Broadly, it is about Europe building up its own capabilities and not relying so heavily on the US for continental defense and deterrence. Many European and US policymakers have long supported higher European defense spending, but the similarities end there. ESA can mean creating a European army through the EU, strengthening the European pillar of NATO, decoupling the US from Europe given competing US priorities, or simply the desire for the EU to set and achieve its own ambitions without US influence. The Central and Eastern European (CEE) allies along Europe’s eastern frontier find this threatening. Their response to ESA has been resounding: there is no alternative to a US-European alliance, though their voice has been weakened by the UK’s departure from the EU, given it too is a traditional skeptic toward European autonomy. It, therefore, seems unlikely that the UK would participate in ESA, leaving France as the strongest pro-ESA military power (though omitting UK capabilities and cooperation with France which began in 2010.)

From the US perspective, resources are not unlimited. The trend from Afghanistan and AUKUS, driven by a singular focus on China, will almost certainly continue in the next US National Security Strategy and National Defense Strategy. The US must plan for a worst-case strategic simultaneity scenario, where dual crises in the Indo-Pacific and along NATO’s eastern flank force an impossible choice between reinforcing one region and not the other. And if the US knows this, China and Russian very clearly know it too.

The good news: ESA can help. The key is sequencing. China poses the longer-term threat, while Russia poses the more immediate one. So a build-up of European capabilities can help deter Russia and prevent this ultimately lesser strategic challenge from monopolizing the resources needed for the greater one. It could even discourage Sino-Russo convergence.

This will require transatlantic diplomatic alignment — at the highest political levels — on ESA. The US administration has underlined its ironclad commitment to NATO and the mutual defense clause of Article 5, which should minimize Europeans’ concerns over US disengagement, even as it plans and funds policies to confront the threat from China. This must continue. EU officials have also recognized that “NATO is the cornerstone of EU defense and always will be.”

So, there is already some agreement that ESA can enhance NATO rather than replace it.

Several upcoming strategic documents could also further this end. The next NATO-EU Joint Declaration, recently announced by allied leaders, should encourage deeper defense integration between the organizations. The EU’s Strategic Compass will outline a plan for European defense and security policy and will shape ESA, including its role in the alliance. NATO’s Strategic Concept will advocate closer NATO-EU cooperation and should detail capabilities and requirements where the EU can enhance NATO’s European pillar, such as the EU’s Permanent Structured Cooperation (PESCO) project for military mobility, which already has support from non-EU members Canada, Norway, and the US. The next US National Security Strategy and National Defense Strategy should unambiguously emphasize the enduring value of the transatlantic alliance to the US.

Critics will point to Europe’s recent defense spending history as a cause for concern. Only 10 of the 28 European NATO members have reached the 2% defense-spending target, while US expenditures have remained high, including for European defense. This is all the more reason to amplify support for ESA, which has become a rallying call for historically reticent West European allies. This will ultimately benefit CEE allies, too. The US has made clear that there will be no progress without a significant commitment of European cash. “It’s important to get out of the theoretical realm, the think tank realm of strategic autonomy . . . and to talk about pragmatic, practical solutions,” State Department Counsellor Derek Chollet said last month.

Yet this will only work with sustained diplomatic engagement. Cohesion is the center of gravity of the transatlantic alliance. To maintain it, allies will need to align views on ESA in the coming months, even while concerns persist across European capitals about the US’s so-called pivot to the Indo-Pacific. The alliance should remember, however, that pivoting also means keeping one foot firmly rooted in place — and that foot is anchored in the Euro-Atlantic region.

Fiona Noonan is a Transatlantic Leadership Intern at the Center for European Policy Analysis;

Carsten Schmiedl is Senior Program Officer in the Transatlantic Defense and Security Program.