Russia is making further allegations about the risks of a nuclear explosion, but its real message is very different. 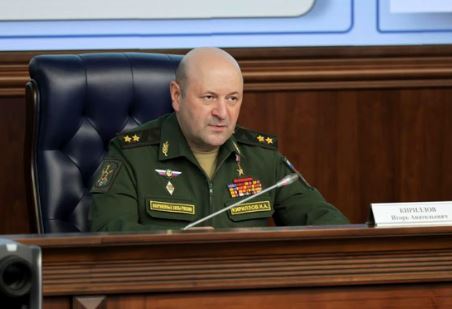 Russia is talking about nuclear weapons again. It’s talking a lot. On October 24, the head of the Russian radiation, chemical, and biological defense forces, Igor Kirillov, said that the Ministry of Defense has information about Ukraine’s alleged plan to detonate a so-called dirty bomb (an explosive device containing radioactive material) and blame Russia for this.

Of course, this is untrue, just as earlier allegations were untrue. Russia has previously accused its smaller neighbor of numerous sins: that it planned to create nuclear weapons and their delivery systems; that it had built biological weapons, with a view to spraying them over Russia; and that it planned attacks on its own nuclear power plants (NPP) and the storage of radioactive waste. None of these events have occurred, because they were never planned.

So why does the Kremlin continue to discuss the issue (once again on October 26, in remarks by Vladimir Putin), when there is widespread global skepticism?

Russia’s real intent here is to menace the West, using the tactics that it believes worked to its advantage in the past. Moscow thinks its threats dissuaded the US and the rest of the West from imposing a no-fly zone in the skies of Ukraine, and that similarly it dissuaded Germany from sending modern tanks, and encouraged Switzerland, Hungary, and Israel to reject weapons requests altogether. These are chalked up as successes by the Kremlin, which by creating new threats hopes to cut off existing weapons supply channels, deter the delivery of new capabilities, and demonstrate that continuing Ukrainian resistance will be dangerous for Europe.

Its statements are predicated on the idea that the authorities in Kyiv plan highly dangerous activities and will seek to pin the blame on a Kremlin innocent of malign intent. Once this happened, the argument runs, Russia would be blamed, providing a significant victory for Ukraine and a very significant Western response. This is absurd from a factual point of view. Russia would not be blamed for a dirty bomb without hard evidence to support the allegation. Any tactical nuclear weapon (TNW) it might use is easily distinguishable from a dirty bomb. (And the US continues to worry that the Kremlin’s statements may be the precursor to a TNW strike.)

Yet the Kremlin narrative provides clues. If it were to use a nuclear device in or near Ukraine, the political ramifications would be devastating. This worries it far more than the precedent of nuclear weapons use or the casualties that may result — if it were to lose the support of China, India, Turkey, and other friendly states, it might cause a backlash that would damage the entire invasion project. Russia’s friends, passive and active, are helping compensate it for lost trade with the West. Its budget — and by extension the war — are now heavily dependent on exports to these countries. If they also turn away from Russia, it will find itself in absolute isolation, with no ability to compensate for its losses. It is therefore a big plus for the world that Russia understands the risks of its use of nuclear weaponry, and is afraid.

Russia also fears new and longer-range/better-capability weapons for the Ukrainian armed forces, and their potential use against Russian territory in areas like Belgorod. (While Ukraine is already shelling the Belgorod region closest to the border, this is limited in range and scale.) If Ukrainian forces were able to reach further, hitting other major cities in Russia, how might the Kremlin respond? It already faces demands for additional and more grievous attacks, despite the current bombardment of Ukrainian cities, from one head of the war party, the Chechen leader Ramzan Kadyrov. He argues that Russia is too weak and that Ukrainian cities should simply be erased in response. Were Ukraine to receive ATACMS ballistic missiles, with a range of up to 300 kilometers (186 miles), much more Russian military infrastructure would come within range, dealing a serious blow to its already struggling logistical efforts to supply its war machine. The critically important Kerch Bridge, for example, already badly damaged in an October 8 attack, might face daily strikes. Other targets in Crimea likewise. Given the threat, it makes sense for Russia to do everything possible to portray Ukraine as a dangerously unbalanced power.

If there’s anything worrying the Kremlin more than Ukraine receiving still additional high-grade US military technology, it is the fear that a decision to use nuclear weapons — or that it’s behind a dirty bomb explosion — would trigger direct US and NATO intervention in the war in Ukraine. This has been a constant concern ever since Russia’s full-scale invasion on February 24. That would certainly bring the adversaries closer to a nuclear engagement. Clearly, there is room here for misunderstandings and for escalation.

But the West is not obliged to follow Russia’s logic whereby any robust act leads to Götterdämmerung. Ukraine should receive additional military support. And for the voices in Russia arguing that it can deliver even harder strikes on Ukraine, and that neither the US nor the West will respond in any way, there is only one response. Russia cannot be allowed to dictate the West’s responses through nuclear blackmail.