Berlin aims to improve - but many doubt its determination and the country punches below its weight on important EU tech dossiers. 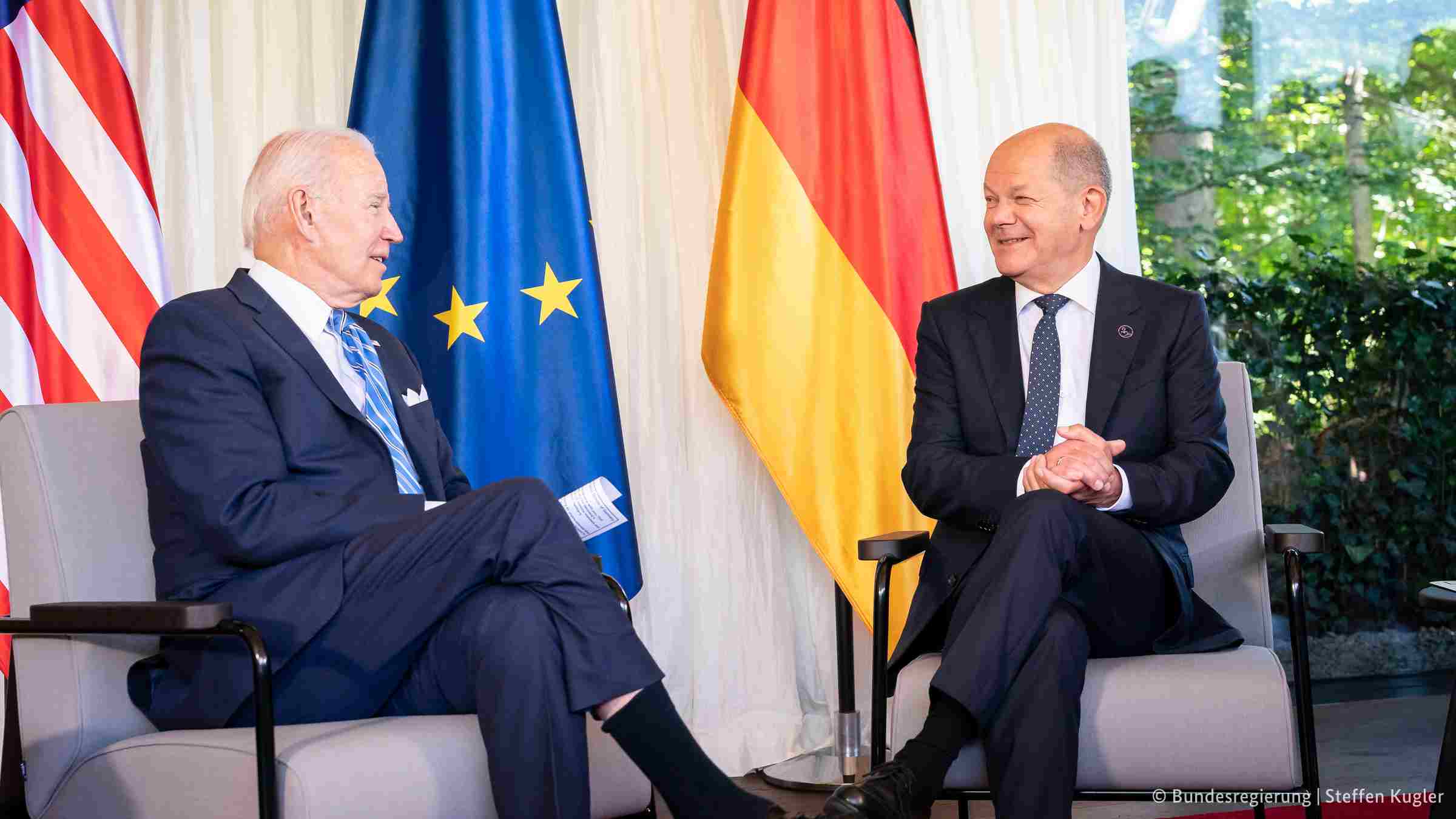 Photo: Federal Chancellor of the Federal Republic of Germany Olaf Scholz and US President Joe Biden at a G7 summit meeting. Credit: @Bundeskanzler via Twitter.

Almost a year after the new German government was elected, it will present its digital program on August 31. The strategy originally had been promised for the first half of 2022.

Don’t expect a revolution. Chancellor Olaf Scholz’s promise of a ‘digital policy Zeitenwende’  feels like a distant dream. Critics complain that the new plan, a draft of which has been leaked, remains vague in certain areas and lacks clear budget allocations. Far from leading on EU-wide tech policy, Berlin has failed to stake out clear positions, diluting its influence on dossiers from artificial intelligence to data sharing.

Germany ranks only 13th in the European Commission’s Digital Economy and Society Index (DESI), the European indicator that ranks the digital performance of the EU member states. Only 50% of Germans possess basic digital skills – compared to 80% of Finns. Fewer than 40% of German households have a fixed broadband connection – compared to 70% of Spaniards.

The new strategy aims to bump Germany up into the DESI’s top ten. Three strategic axes are identified: the provision of data and gigabit networks, the introduction of secure e-identities, and uniform standards for interoperability. The new draft stipulates each ministry’s main digital policy projects.

Critics say these goals remain insufficient. Achim Berg, president of the digital association Bitkom, says that tenth place in the DESI ranking would still be only “midfield”.  It has not yet been confirmed which ministries will be responsible for the data institute, intended to drive data availability and standardization.

The biggest issue remains money. No budget to implement the plan has been published.  The question of financing will only be clarified in budget negotiations this autumn. Prospects for generous funding are dim.  In the wake of Russia’s invasion, the government had prioritized increased defense and green energy spending, not digital projects.

“The current state of discussion still does not live up to the claim of the promised digital awakening,” complains Bitikom’s Berg. He and other business associations stress the need for the government to earmark additional funding for digitization.

Another critical issue is how to execute plans. While Christian Democrat Angela Merkel coordinated digital policy within her chancellery,  Social Democrat Olaf Scholz’s three-party government has decided to give the coordination responsibility to the Transport and Digital Affairs ministries.  The Interior Ministry is in charge of cybersecurity. The Ministry for Economic Affairs and Climate Action leads on start-ups, while the Finance Ministry is responsible for the budget for digital topics.

“Too many cooks have been cooking their own porridge,” worries Green Party digital spokesperson Konstantin von Notz.  He says the Chancellory should take charge to ensure effective implementation.

A particular frustration is Germany’s relative backwardness in putting government services online – and lagging in e-identification.  Although the country’s ID card has had an eID function for more than a decade, this solution is not used across the board. Overall, the country ranks 17th out of 27 EU member states in the DESI e-government benchmark. “In the area of e-government, too, we are far behind in all international and European comparisons,” says von Notz.

Confusion over German digital policy extends to EU digital policy. While France has pushed an aggressive Digital Sovereignty agenda, Germany has failed to stake out strong positions and ended up following Paris’s lead on dossiers ranging from semiconductor subsidies to data localization.

The European Commission’s proposal to combat child sexual abuse via what critics call ‘chat control’ divides the German government. Social Democrat Interior Minister Nancy Faeser has expressed support for the crackdown. But the Greens and the liberal-led Digital Ministry worry about an erosion of privacy protections and the circumvention of end-to-end encryption.

The EU Digital Services Act (DSA), a landmark bill giving platforms tough new responsibilities for dealing with illegal content, needs to be implemented – for which the Transport and Digital Ministries will appoint the competent national authority, the Digital Services Coordinator.  Another key digital file, the Data Act, is shared between the Economy and Climate Protection and Digital Ministries.

Given Scholz’s government’s record and the challenge of coordinating across numerous ministries, it’s hard to expect much progress. Instead, expect confusion.

Laura Kabelka is a Berlin-based correspondent for Euractiv.com specializing in digital policy.