Defending NATO in the High North

The entry of Sweden and Finland into the NATO alliance radically improve its ability to defend the High North. 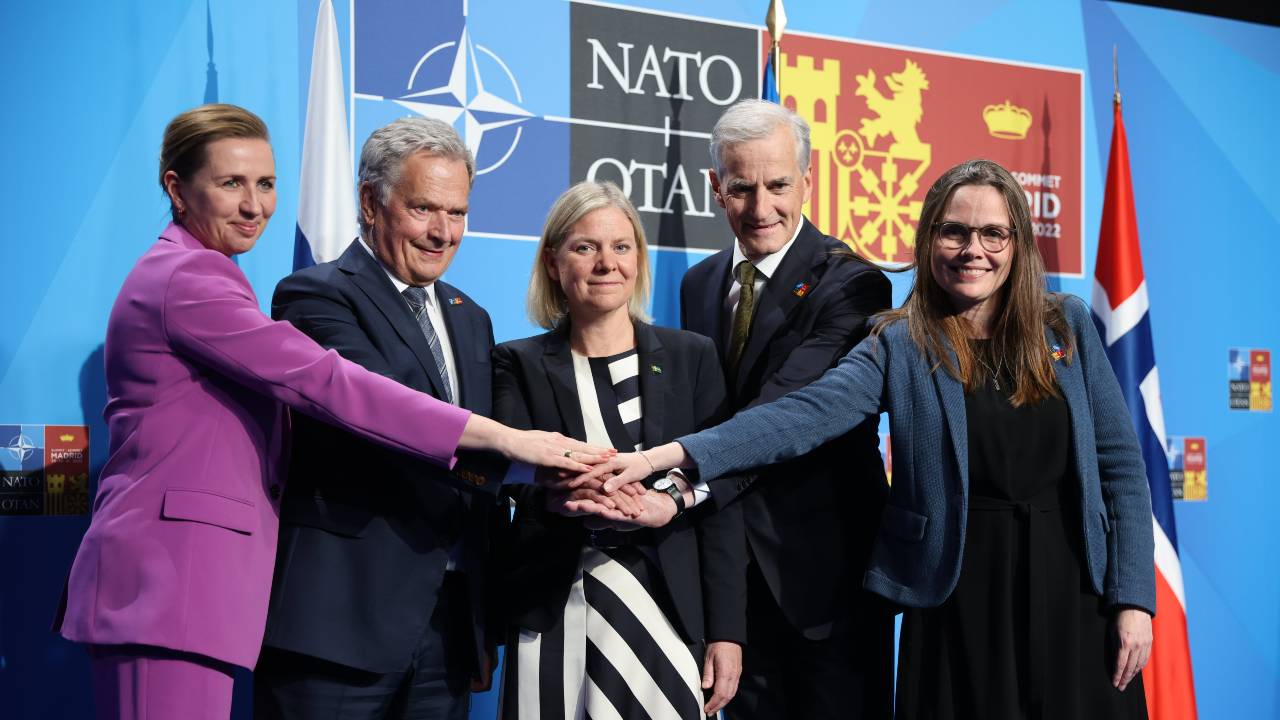 Photo: (From right to left) the Leaders of Denmark, Finland, Sweden, Norway, and Iceland. Credit: Sauli Niinistö, President of Finland, via Twitter.

The entry of two wealthy and well-defended Nordic states mark a genuinely transformational moment for the alliance in the High North. The decision, which still has to be confirmed by the other 30 member state parliaments, is only the latest self-harming consequence of Vladimir Putin’s largest invasion of Ukraine on February 24, coming just days after the European Union (EU) gave the country candidate status, and NATO pledged more arms.

It will give NATO operational depth and logistic routes that it previously lacked. When Sweden and Finland were non-aligned, the main route for NATO reinforcements heading to Finnmark, the northernmost part of Norway, had to follow the single coastal road, the E6, along the Norwegian shoreland. Any Russian stand-off weaponry, or special forces, could, with limited effort, strike the E6 route and cut off Northern Norway, leaving it open to a rapid Russian advance.

This lack of operational depth and NATO’s reliance on a single route to reinforce the High North has long offered an opportunity for a Russian fait accompli attack early in any conflict with NATO.

A sustained fight to defend an area needs a land-based supply route to maintain the flow of equipment, logistics, and reinforcements, as these represent thousands of tons to be hauled into the operational area. Airborne or air transported troops can only sustain a fight over a limited time. The recent battle for Hostomel Airport outside of Kyiv, where Russian airborne troops were beaten by Ukrainian ad hoc formations, shows the short duration airborne forces can sustain a fight without land-based reinforcements and a logistic tail.

The fastest way to move ground units from Germany, Denmark, and the UK to Northern Norway is through Sweden, which has several roadways leading to the far North. Meanwhile, coastal Norway has fjords, deep-cut valleys, mountainous terrain, and numerous bridges that could be destroyed and hinder NATO movement; Sweden offers a more direct route.

A Russian military planner, creating a case for assault plans on Northern Norway, previously only had to focus on the western edge defending against NATO forces arriving along the Norwegian coast. The southern flank towards Sweden and Finland was “protected” by Swedish-Finnish neutrality. So the Cold War expectation, maintained until now, was that any USSR/Russian attack on Northern Norway would strike from east to west.

All that has changed. NATO’s defense of the High North will now benefit from the alliance’s ability to rapidly pre-position air assets on Swedish and Finnish airfields if a conflict is on the horizon. The Swedish towns of Kiruna and Gällivare have civilian airports, and any airport can also be used for military purposes. There are also several airfields in Finland; Enontekiö airfield is almost on the Norwegian Finnmark border. These added airfields and assets give a stronger ability to establish air superiority in the Far North and means less reliance on a few Norwegian airports that could be disabled in the initial stages of the war.

The development of modern anti-ship missiles, with a range of hundreds of kilometers, in combination with an enhanced ability to base and use operational space in the North, also gives NATO a broad ability to prevent the Russian Northern Fleet from reaching the Atlantic Ocean to intercept the movement of US and Canadian formations to Europe.

Swedish-Finnish entry means the whole Scandinavian peninsula enjoys membership and strengthens NATO’s defense of the High North by providing logistic pathways, operational space and depth, and the ability to base air assets which would combine strengthen the deterrence posture against Russian aggression. Deterrence means a higher threshold for conflict, both for Sweden and Finland but also for NATO as a whole. It is therefore also an unquestionable defeat for Vladimir Putin.

Jan Kallberg is a Nonresident Senior Fellow with the Transatlantic Defense and Security program at the Center for European Policy Analysis (CEPA). He is a former Research Scientist with the Cyber Operations Research Element (CORE) with the Army Cyber Institute at West Point. His works have appeared in Joint Forces Quarterly, Strategic Studies Quarterly, IEEE Security & Privacy, and IEEE Access. Follow him at cyberdefense.com and @Cyberdefensecom.