After a prolonged assault on independent media in Poland and Hungary, fears are rising that the Czech Republic may be heading down a similar path 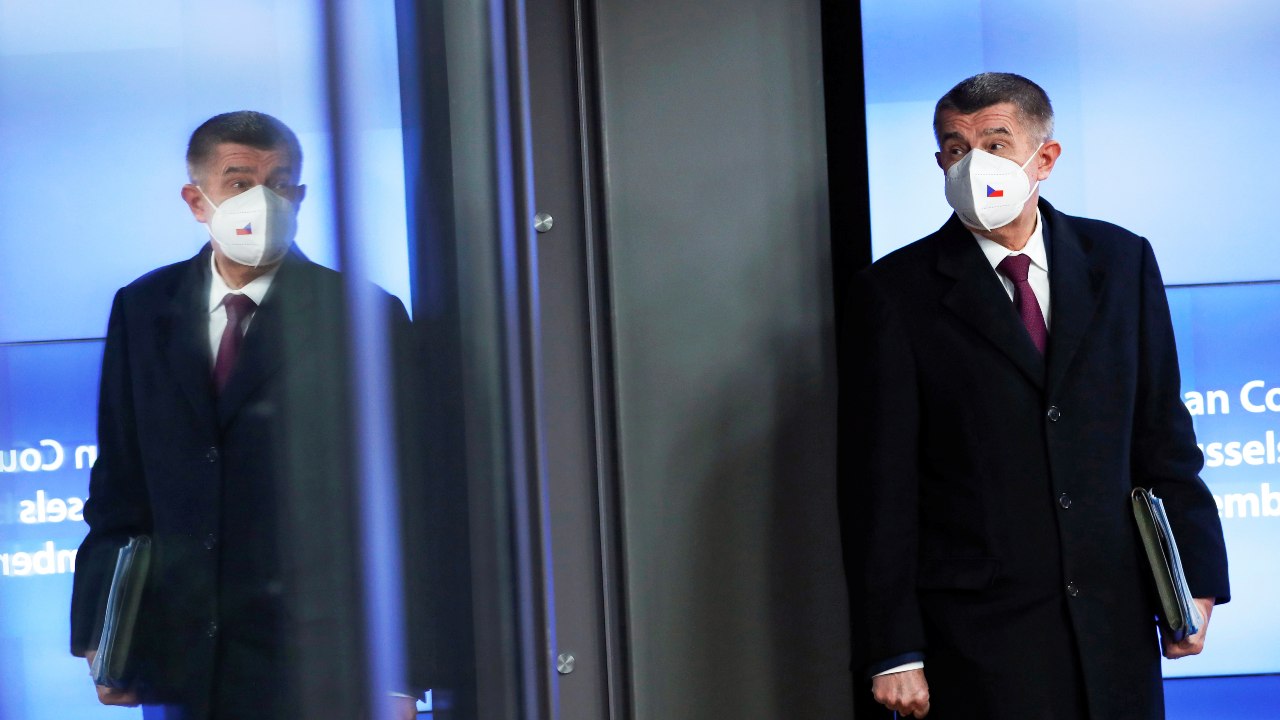 Photo: Czech Republic's Prime Minister Andrej Babis reflects in a glass as he leaves at the end of an EU summit in Brussels, Belgium December 11, 2020. Credit: Francisco Seco/Pool via REUTERS

Czech journalists have long warned of increasing consolidation in private media. A handful of businessmen control a large portion of the market, as shown by a map made by the server MediaGuru, and several of the most popular news outlets belong to Prime Minister Andrej Babiš’s holding Agrofert. While the premier denies having any influence over the news coverage within these outlets, covert recordings show him discussing upcoming pieces which could damage political opponents. The European Commission has further found that the PM retains “decisive influence” over his business holding.

Amidst these developments, the public broadcaster Czech Television (ČT) has remained one of the few outlets beyond the control of the Prime Minister and other moneyed interests. It has at times been criticized by politicians in power, among them the PM, who has charged ČT with bias in its coverage of his businesses. Various outlets have also accused ČT of liberal bias and anti-Russian propaganda, although it is worth mentioning that according to the non-final judgment of the Prague City Court, at least one of these same outlets — Parlamentní listy — “spread lies and disinformation.”

ČT has been defended by institutions charged with its oversight. And despite the attacks on its neutrality, it remains the Czech Republic’s most trusted news source. In a 2019 poll, 77% of respondents rated ČT as either “trustworthy” or “mostly trustworthy”, as compared with the privately owned stations TV Prima (54%) and TV Nova (44%). Babiš’s newspaper MF Dnes polled at 43%.

Yet ČT is now under siege. In the spring of 2020, six new members were elected to the ČT Council with the support of the current government coalition. The Council is a 15-member body elected by parliament for staggered six-year terms. It oversees ČT’s budget, monitors the broadcaster’s adherence to ČT’s code and public service remit, and appoints and dismisses the station’s Director General.

Following the most recent election to the ČT Council, seven councilors are now appointees supported by Prime Minister Andrej Babiš’s party ANO (Action of Dissatisfied Citizens). Despite a reasonable historical level of cross-party cooperation to choose councilors who “represent major regional, political, social and cultural opinions and ideas,” ANO systematically blocked the appointment of its critics and supported candidates with far-Right ties. One of the newly elected council members Pavel Matocha has worked as a journalist for media owned by the Prime Minister’s business holding, raising concerns that he may do the PM’s bidding.

Matocha told a reporter last year that: “ČT is too pro-Brussels and opposes the government. I want to change this.” He has also criticized named reporters as “quasi-journalists” in whom “the leadership of ČT should take interest,” citing alleged complaints that ČT from dissatisfied viewers. When pressed, Matocha refused to make these complaints public.

Concerns about the ANO cohort deepened in November when the newly reconstituted Council sacked its five-member Supervisory Board, which oversees  ČT’s financial compliance. This unprecedented decision prompted the resignation of the ČT Council’s Chair René Kühn and Vice-Chair Jaroslav Dědič, both of whom had opposed the move, from their leadership positions. The Council subsequently elected a new Supervisory Board, overriding three members who refused to recognize the legitimacy of the vote, and appointed council member Matocha as Chair.

The political opposition has decried these developments, alleging they indicate a disregard for the public broadcaster’s traditional norms. One senator warned against the politicization of public television, citing the examples of Hungary and Poland. The opposition-controlled Senate condemned the decision and called for an investigation. Lastly, four of the five sacked board members issued a pre-action letter addressed to the ČT Council, meaning that the matter may end up in court.

Some, including ČT’s Director General Petr Dvořák, believe more is to come. He has repeatedly criticized ČT Council members and has asserted that the new members were, in part, elected on the understanding that they would be willing to fire him. In the current highly politicized atmosphere, it is clear Dvořák would be replaced by someone more positively disposed towards the government, and possibly more willing to influence ČT’s news coverage.

One of the new ČT Council members, Hana Lipovská, added to these concerns when she proposed slashing the DG’s year-end bonus to zero, claiming the stations’ finances are in a poor state —an allegation popular on the far-right. Lipovská has come under scrutiny for her association with controversial hard-right political figures, and the vastly exaggerated claims made by Lipovská’s inner circle about alleged indiscretions by ČT and its director, have been echoed by ultranationalist politicians to demand Dvořák‘s dismissal.

The response of Czech and EU institutions is now crucial. ČT, like any other outlet, is far from perfect and its news coverage can seem dour compared to its private rivals. Viliam Buchert from the weekly Respekt, for example, would like to see the ČT delve into “the problems of Islam” and would have valued more positive coverage of Donald Trump during the 2016 election. Even ČT’s critics, however, might acknowledge that there is a difference between demanding that ČT cover the U.S. Democrats and Middle Eastern refugees in a harsher way, and forcing it to abandon its challenging approach toward elected representatives. High public trust can only be earned by questioning authority, which, along with its restraint from the sensationalism prevalent on other TV channels, is key to the ČT’s success.

In a public letter, a number of Czech scientists, artists, signatories of Charter 77 and others, demanded the dismissal of the pro-government Council members and called on the government to propose a new system for nominations and elections to the ČT Council. The Czech branch of the International Press Institute has denounced Council Chair Matocha’s “efforts to interfere” with the journalistic integrity of ČT. EU lawmakers should follow suit if they are serious about the need for independent media in Central Europe.