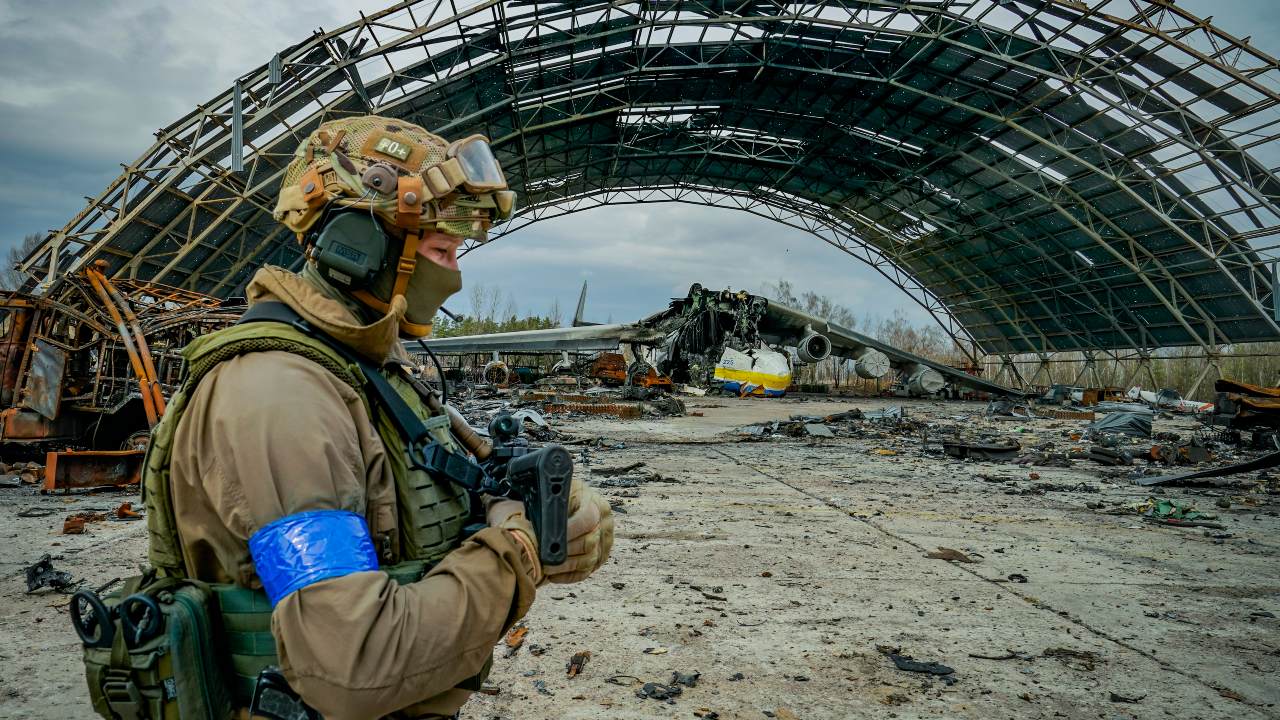 Photo: An Ukrainian soldier passes near a hangar in the Hostomel airport near Kyiv with the destroyed cargo plane Antonov An-225 Mriya. The biggest cargo plane in the world was shelled by Russian forces during its occupation of the airport. Credit: Celestino Arce/NurPhoto

If the plan had worked, the big May 9th parade would have been in Kyiv this year. Volodymyr Zelensky would be dead or in exile, exemplifying the rout of the West’s puppet regime. The “anti-Russia” project of independent Ukraine would be a footnote in the history books.

But it did not work. Instead, the ten-week campaign has already cost Russia 15,000 of its soldiers’ lives. Vladimir Putin is now fighting a war of attrition, backed by the threat of nuclear apocalypse, in the hope of breaking either Ukraine’s will to resist or the West’s will to help it. That may yet work. Attrition hits the weaker side hardest. The West’s newfound unity and purpose are fragile. But they come with huge risks: of military setbacks, palace intrigues, and public dissatisfaction. Even where conquest succeeds, it begets only insurgency. None of that was in the plan.

The real problem for Russia here is not military. It is political. Putin has made a terrible mistake in believing his own propaganda and launching a war based on false assumptions. Now he is making more mistakes and the clapped-out political system offers no easy way of correcting the course. What Russia needs is thoughtful policy planning, based on a cold-eyed, expert assessment of achievable aims and the costs of reaching them. What it has is showbiz: a military parade, big on pomp and light on diplomatic and military impact.

Putin sits uncomfortably on the podium. He has no real military experience: as commander-in-chief, he is closer to Adolf Hitler, an incompetent meddler, than Joseph Stalin, who belatedly realized that he should leave the war to his brilliant generals. Paradoxically, Putin’s best remaining card in dealing with the West is his own demonstrable incompetence and recklessness. If he thought he could seize power in Europe’s second-largest country within 72 hours, with no real plan and no real reason, why would he need any better rationale for using a nuclear weapon?

None of that bothers Russians, for now. The state propaganda machine masks the problems with bombast and Stalinist nostalgia (news just in: we need another Beria). The central message is a contradictory cocktail of national self-esteem and righteous victimhood. Russia is unbeatable, yet also greatly threatened. It is not just young Russian men who are conscripted. Ideas are called up too: history, geography, and economics are glumly polishing their boots and learning how to march.

These conscripts can be bullied into obedience, but not effectiveness. Reality bites eventually. Russia is huge by land area, but it is weak. NATO’s combined GDP is twenty times larger than Russia’s. Its defense spending is fourteen times larger. Admittedly, Western defense budgets are often frittered away on bureaucrats’ salaries and pointless procurement. But any tussle between Russia and the West is not a conflict of means, it is a conflict of political will. And ours is now growing faster than Russia’s.

The relentless focus on the defeat of Hitler’s Germany in 1945 is a wasting asset too. The syllogistic insistence that the Soviets defeated the Nazis, so anyone who opposes modern Russia is ipso facto a Nazi, is wearing thin. “Nazi” used to be a potent insult. Over-use is wearing it out. Even Germany is beginning to escape from the historiographical manacles in which it has locked itself for the past 70 years. If they feel guilty about what they did to Russia, shouldn’t they feel even guiltier about what they did to Ukraine? (And elsewhere, but leave that for later).

In the long run, Putin’s war is unwinnable. But great devastation lies on the road to defeat.