China’s messaging on the Russian invasion of Ukraine belies its claims to neutrality, but material support is harder to gauge. 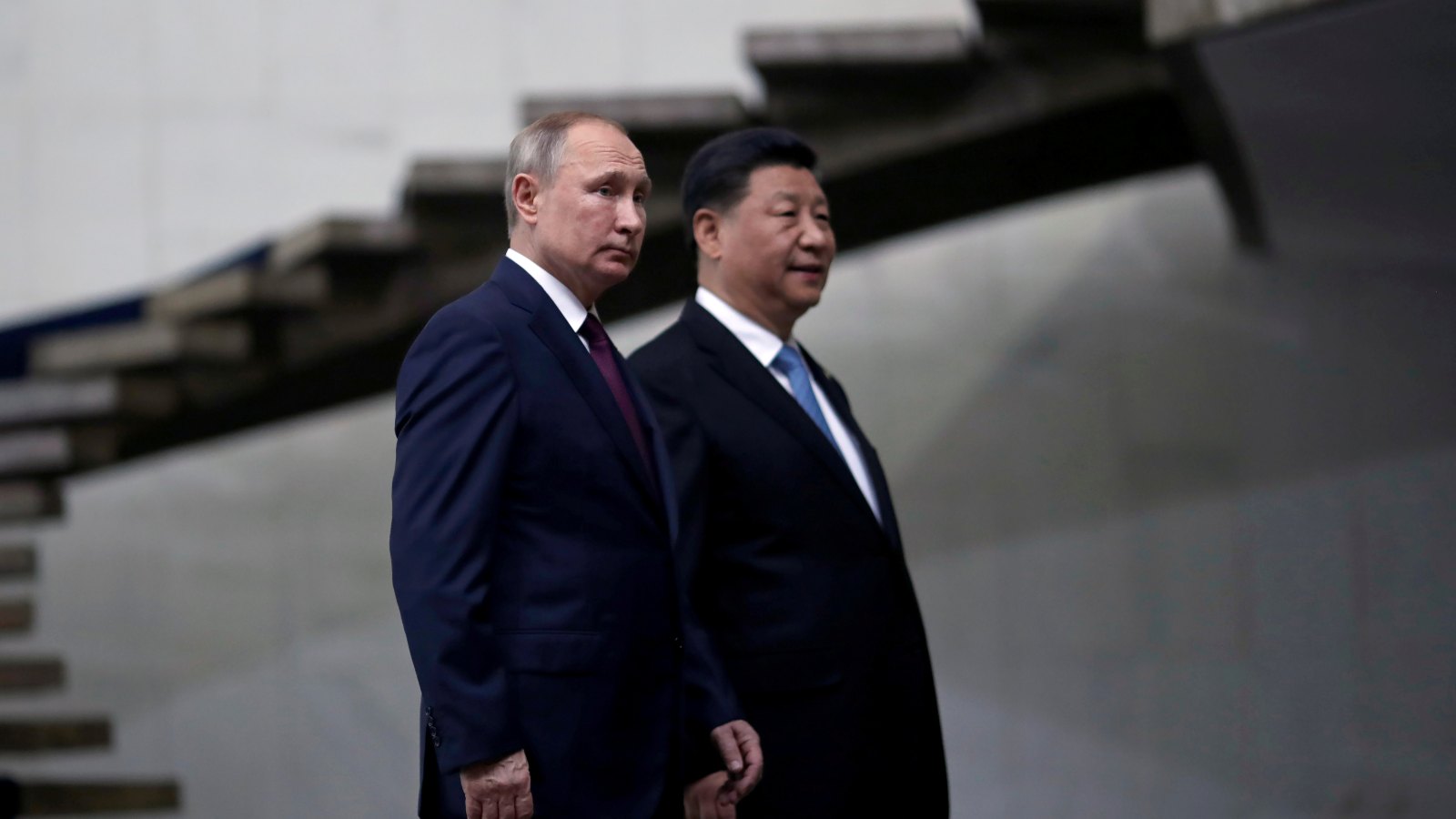 Russia's President Vladimir Putin and China's Xi Jinping walk down the stairs as they arrive for a BRICS summit in Brasilia, Brazil November 14, 2019.

At least one Chinese industry is offering aid and comfort to Vladimir Putin over his invasion of Ukraine: propaganda outlets are providing harmonic background vocals for Russia’s official song.

Authoritative media outlets in the People’s Republic of China (PRC) parrot the Kremlin’s talking points. Citizens are told that the invasion is a “special military operation,” that Russia acted because of NATO’s eastward expansion, and that the Kremlin was forced to enter Ukraine to root out US biological weapons laboratories.

That theme echoes Chinese and Russian propaganda efforts observed throughout the COVID-19 pandemic which attempted to suggest that the virus had come not from Wuhan but from a US military lab in Maryland.

Meanwhile, the US—citing unspecified intelligence—has warned Xi Jinping and the Chinese government about its behind-the-scenes involvement with Russia over Ukraine.

Firstly, the US accused China of knowing in advance that Putin planned the invasion, following his meeting with Xi on February 4 as the Winter Olympics opened in Beijing. China pushed back against this claim and PRC officials have rejected any responsibility for failing to dissuade Putin from opening hostilities, or talking the Kremlin down even as its armies massed on Ukraine’s frontier.

What did Xi Jinping know about the invasion of Ukraine by Russia and when did he know it? According to Qin Gang, PRC Ambassador to the US: “Assertions that China knew about, acquiesced to or tacitly supported this war are purely disinformation. All these claims serve only the purpose of shifting blame to and slinging mud at China.”

Secondly, the US, as part of a strategy of publicizing intelligence material to pressure its two largest authoritarian opponents, said that Russia had asked China to provide military and other aid to assist its faltering military campaign. The European Union (EU) joined the chorus, claiming it had “reliable evidence” that the PRC was considering such a move. President Biden reiterated these points to Xi in a call on March 18 and “described the implications and consequences if China provides material support to Russia as it conducts brutal attacks against Ukrainian cities and civilians.” PRC officials have rejected this as another example of the US “maliciously spreading disinformation targeting China.”

Yet while the US and the EU have called for China to use its partnership with Russia (Xi has described the Russian leader as his “best friend”) to pressure the Kremlin into ceasing hostilities and opting for a diplomatic resolution, China has instead offered to act as an intermediary.

Over the past few weeks, China has claimed repeatedly that it would be willing to play mediator between Russia and Ukraine. In doing so, Beijing is trying to portray itself as a “neutral” and “impartial” party that both sides should trust.

How convincing is this? Despite the claim of neutrality, Chinese officials and media outlets have been consistently echoing and amplifying Russian messaging about its “special military operations” in Ukraine. To combat the common perception of China as Putin’s enabler and tacit supporter, state media declare that their country is “shouldering its responsibilities as a major country” by promoting talks between the warring parties.

This echoes the way that Beijing tried to position itself as an international leader at the height of the COVID-19 pandemic, despite its resistance to a comprehensive and transparent investigation of the origins of the virus, and its continuing efforts to resist a full inquiry into the role, if any, of the Wuhan Institute of Virology.

Since Russia’s invasion, Beijing largely has hewed to Kremlin talking points and avoided publicly criticizing Moscow. PRC media coverage typically asserts that the US and NATO are at fault for the conflict, a point made by Xi in his conversation with Biden when he suggested that NATO and the US were “the crux of the problem.” Similarly, China has vehemently denounced what it sees as a US effort to blame China for the pandemic and criticized Washington’s own response to COVID-19 as a human rights violation.

In a case of disinformation déjà vu, a number of China’s main talking points on Ukraine strikingly echo narratives spread by its propaganda machine in the first year and a half of the pandemic, some of which were inspired by Russian narratives. Most notable is the accusation—borrowed from the Russian Defense Ministry—that the Pentagon has secret biolabs in Ukraine where it has tested bat coronaviruses. This parallels the claim by PRC officials and media that Fort Detrick, a US Army facility in Maryland, was the true source of the novel coronavirus — an evidence-free argument meant to deflect blame for the pandemic from China and further cast the US military as a shadowy global threat.

After this canard largely disappeared from PRC official accounts late last year, Fort Detrick made a comeback when PRC Foreign Ministry spokesperson Zhao Lijian repeated the allegation at multiple recent daily press briefings as supporting “evidence” to back up the Ukraine biolabs conspiracy theory. This makes sense in the largely senseless world of conspiracy narratives — if one gave credence to the view that the US military spread a deadly virus around the world and made it look like it started in China, it is not a big leap to believe that the US would have secret biolabs in Ukraine.

Given the potential costs of supporting Putin post-invasion, why are PRC officials and media echoing Russia’s messaging on Ukraine and connecting it to outlandish pandemic conspiracy theories? The answer would seem to be that Xi Jinping is seeking to pave the way for another five-year (or more) term in office to be confirmed at the 20th Congress of the Chinese Communist Party (CCP) in October, in which case he may see no alternative to staying the course on Russia policy and trying to deflect attention from its negative consequences. To fundamentally alter this approach would be an admission of failure, which is not the CCP way. Considering Xi has met Putin 38 times, an admission of error would be a personal setback for the PRC leader.

Yet, China’s position toward Russia and its brutal invasion of Ukraine is less clear than the propaganda machine might make it appear. Despite much speculation to date, we have not seen evidence of PRC efforts to evade international sanctions, given the prospect of the stinging counter-sanctions promised by the US. As has been widely pointed out, China needs Western markets for its goods; its reliance on Russia is more limited, despite the new oil and gas deals Xi has agreed with Putin. Foreign Minister Wang Yi openly stated that China wishes to avoid US sanctions.

Thus far, doubling down on Russian messaging has detracted from an important truth: China has provided very little overt support for Russia in material terms or in international organizations. And that is unlikely to change. Instead, China is likely to keep promoting the Kremlin’s talking points on the war while maintaining a public façade of neutrality.

Elizabeth Wishnick is a Senior Research Scientist at CNA, a non-profit research institute in Arlington, Virginia, and the author of the www.chinasresourcerisks.com blog. She is on leave from Montclair State University and a Senior Research Scholar at the Weatherhead East Asian Institute, Columbia University. Josiah Case is a Research Analyst in CNA’s China and Indo-Pacific Security Affairs Division where he authored Telling China’s COVID-19 Story Well: Beijing’s Efforts to Control Information and Shape Public Narratives Regarding the 2020 Global Pandemic.