Whoever is Merkel's successor, the new boss in Berlin is unlikely to be as indulgent toward the Visegrád group 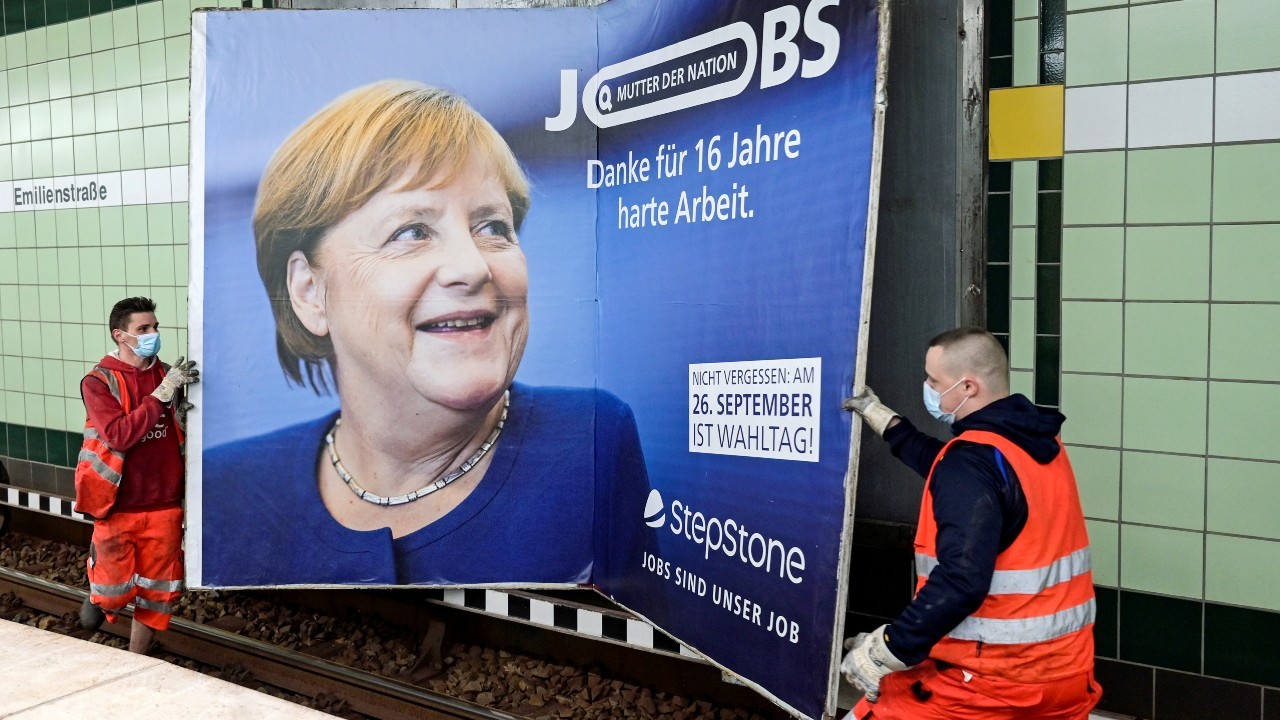 Photo: Workers remove an advertisement showing German Chancellor Angela Merkel with a slogan that reads "Mother of Nation - Thanks For 16 Years of Hard Work" before the upcoming state elections in Hamburg, Germany September 24, 2021. Credit: REUTERS/Fabian Bimmer

Czech is rightly considered to be one of hardest languages to learn. Pronouncing some words and sentences is close to torture. But there is one world leader who can actually pronounce řízek (pork schnitzel) correctly. Her name is Angela Merkel.

It is no secret that Merkel has a soft spot for (the former) Czechoslovakia, its people, its cuisine, and its culture. As a young East German scientist, she was invited to Prague in the late 1970s by Professor Rudolf Zahradník, a colleague of Merkel’s future husband, who later became president of the Czech Academy of Sciences, and a mentor of Merkel’s in her first career as a research scientist.

Having traveled the so-called Banana Road (the fruit and other produce was more often available for Czechs than for East Germans) the special bond that survived was not only established but continued throughout her tenure as one of the most powerful women on the planet. Merkel would regularly return to Prague to see her mentor, Professor Zahradník, even after becoming Chancellor. She continued these visits right up until his death in 2020.

“Compared to her predecessors like Helmut Kohl or Gerhard Schröder, Merkel`s view of European unity was different. She took the eastern European countries into consideration much more,” claims Ralph Bollmann, a Merkel biographer.

Even now, “Merkel believes that Poland, the Czech Republic, or even Hungary contributed more to the fall of the Iron Curtain than East Germans, who in a way only rode on the wave of democratization,” Bollmann added.

“Governments in Warsaw [over] the past 15 years have benefitted from Merkel`s visible friendship and her passivity in certain matters. Especially when the Rule of Law principle in Poland started to be undermined, Germany even tried to slow down other EU member states in punishing Warsaw,” explains Bartosz Wieliński, Deputy Editor-in-Chief of Gazeta Wyborcza newspaper and its former correspondent in Berlin. Paradoxically, this did little to prevent the growth of anti-German sentiment in Poland from 2016, according to Wieliński.

That remains visible in the behavior of the current PiS-led (Law and Justice) which repeatedly brings up German atrocities in Poland during World War Two, regardless of Merkel’s approach.

For most Poles now, the preference for her successor as Chancellor is obvious. Armin Laschet, Christian Democratic (CDU) candidate is widely seen as the man to continue the Merkel era, which is exactly what Warsaw seeks. Given Sunday’s result, Poland may be disappointed, with the Social Democrats polling a small but significant way ahead of Laschet’s party.

“The PiS government should be scared of the Rot-Grün [coalition of Social Democrats and Greens]. It is likely that Olaf Scholz [the Social Democratic candidate] would actually attack Polish populists, which is exactly what former Social Democratic Party chairman Martin Schulz did just a few years ago,” Wieliński said.

The Czech Ambassador to Germany, Tomáš Kafka, sees Scholz as a technocrat with little sympathy or interest in Germany’s eastern neighbors, and few connections to Central Europe. No great admirer of France or the European Union’s (EU) institutions in Brussels either, the potential German Chancellor may simply express a widespread west European feeling by demanding that the Visegrád states of Poland, the Czech Republic, Slovakia, and Hungary, obey the union’s fiscal rules and demonstrate European solidarity by accepting its share of migrants, something it notably failed to do during the crisis of 2015.

There are other, broader, factors at work. The Central and East European agenda does not “sell” in German politics and media in the way it did in the 1990s when memories of the Cold War were fresh and sympathy was strong for the soot-coated fledgling democracies to the east. Now, with a strong showing from Germany’s Greens and their likely participation in government, Central European resistance to a strengthened EU Green Deal, for example, might well cause policy clashes and more accusations that the newer EU members are failing to pull their weight.

Merkel’s personal affection for the region did not always translate into policy, but whoever her successor the new boss in Berlin is unlikely to be as indulgent to Visegrád. Luckily for the four states, there will be other issues for the next German Chancellor that will need to be addressed more urgently.

The perceived “golden age” of mutual relations might be over. The Czechs achieved an excellent relationship with Germany, something epitomized by the recent successful visit of German President Frank-Walter Steinmeier, which had Czech officials like Kafka waxing lyrical. The relationship seems robust enough to survive Merkel’s farewell, but no one expects her successor to pronounce řízek.