Can — Should — Putin Remain in Power?

Whatever the US President’s thoughts on the matter, only Russians can remove Putin from office. 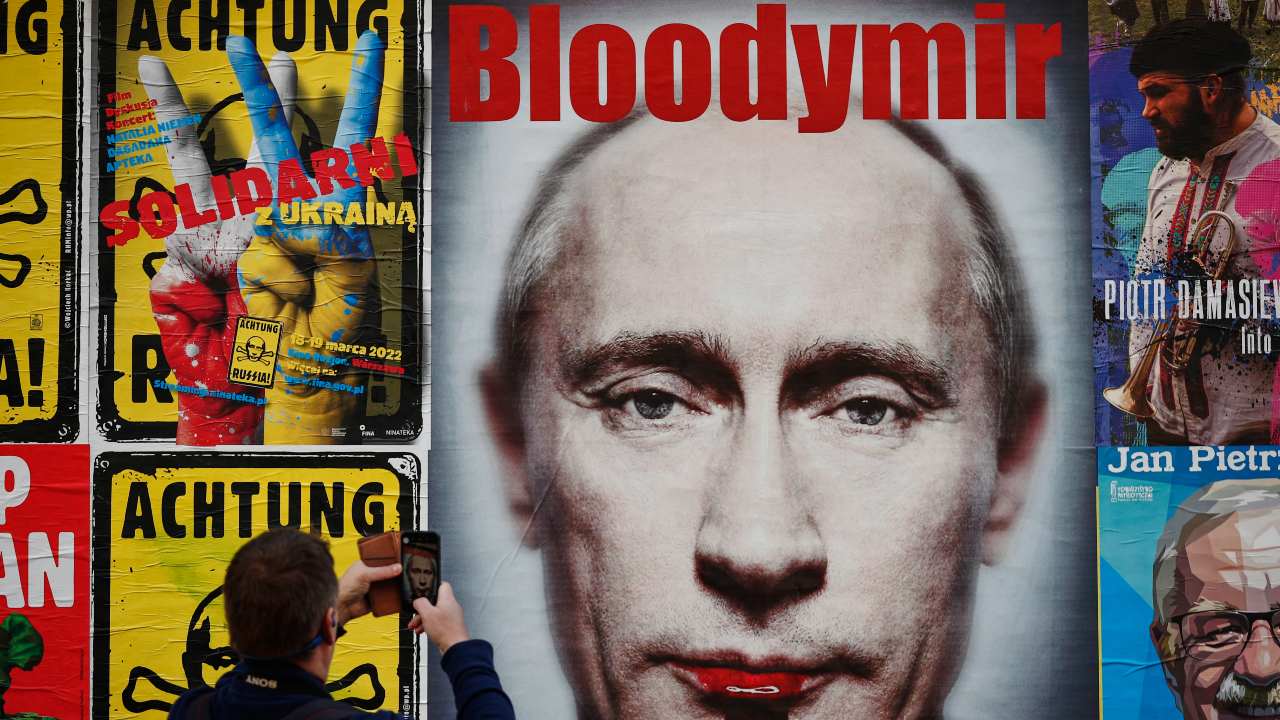 Photo: A man is seen taking a photo with his mobile phone of a poster with a portrait of Russian president Vladimir Putin in Warsaw, Poland on 23 March, 2022. Credit: STR/NurPhoto

“We do not have a strategy of regime change in Russia— or anywhere else, for that matter,” Secretary of State Antony Blinken said March 27, stressing that President Biden’s controversial words about Putin’s continuing hold on power simply meant that the Russian president “cannot be empowered to wage war or engage in aggression against Ukraine or anyone else.”

Still, we must wonder whether Putin’s hare-brained schemes — like those of N.S. Khrushchev — could trigger his ouster. Nikita Khrushchev’s comrades in the Communist Party Presidium and Central Committee opted in October 1964 to remove their First Secretary from power and let him retire to comfortable dwellings where, in time, he dictated his memoirs. Nikita Sergeyevich was fired for pursuing hare-brained schemes. such as the Cuban missile gambit, which risked nuclear war but, fortunately, only cost the Kremlin an embarrassing retreat.

Back in the 1950s, Nikita initially earned praise for plowing up the “virgin lands” of Kazakhstan to boost grain harvests. Experts warned that these barren lands would dry up in a few years. No matter, abundant harvests in the mid-1950s helped consolidate Khrushchev’s power. Harvests shrunk after 1959, but the Party’s First Secretary could and did blame his subordinates. This was Khrushchev’s pattern: go for near-term gains and cope with long-term problems later. Khrushchev’s comrades put up with his “subjectivism” for a decade but lost patience in 1964 and replaced him with Leonid Brezhnev.

For more than two decades, Russian President Vladimir Putin picked his bold initiatives more carefully and with greater success than did Khrushchev. Having blamed Chechen terrorists for apartment bombings by his own agents, Putin launched another war to destroy Grozny and subjugate Chechnya. His public-approval ratings soared.

In 2008, Putin’s forces ripped two provinces from Georgia. In 2014, Putin was embarrassed when Ukraine’s pro-Russian president Viktor Yanukovych was pushed from office by Ukraine’s Revolution of Dignity. But then Putin’s troops (the so-called little green men) seized Crimea and parts of Ukraine’s Donbas. Sending Russian military forces to Syria in 2015 to assist President Bashar al-Assad has been expensive but demonstrated that Russia is again a great power. But for two decades, Putin did little at home to bolster Russia’s productive forces. Fortunately for him, oil prices turned up in the early 2000s and he permitted some of the profits to trickle down.

Unlike Putin’s earlier initiatives, the invasion of Ukraine can be judged as a truly hare-brained adventure. This is a very large-scale military action involving most of Russia’s combat forces. The fighting extends right up to NATO’s borders and has provoked a serious response by the United States and all NATO members. As Russia’s military operation falters, its failures could tempt Putin to escalate to nuclear weapons — risking a horrific exchange with the United States, France, and the United Kingdom.

The operation has been hare-brained also in that it seems to have been launched based on flimsy intelligence and wishful thinking. Putin’s spies should have warned that Ukraine would not go down easily. After 2014, anti-Russian feeling in the Ukrainian public became more intense and military preparations more professional. The effective head of the NATO alliance, President Joe Biden, had shown his distrust of Putin for years. The Kremlin should have anticipated a much tougher response from him than from the previous US president.

The ultimate sign of a hare-brained operation is its failure. The Russian advance has stalled. More Russian soldiers (including seven or more generals) have died than Ukrainian troops or — in spite of terrorist attacks on apartment buildings — civilians. Meanwhile, sanctions drive Russia’s economy to new lows — harming not just living standards but prospects for future industrial and technological development. The world is forgetting the glories of Tchaikovsky and Tolstoy and focusing instead on Putin’s crimes. Putin himself may be indicted at the International Criminal Court. When and how can Russia regain its honor? How and when will it pay its obligations to compensate and rebuild Ukraine?

It is thinkable but unlikely that public pressures like those that drove Yanukovych into exile in 2014 could soon push Putin from power. Though large-scale demonstrations may increase across Russia, police and military repression will probably contain their repercussions. Top-down mind controls keep most Russians ignorant of what happens in their name.

A palace coup by Putin’s boyars — his closet associates — is his more likely exit. There is no longer a Party apparatus, as in Khrushchev’s time, to vote on such issues. Also, Putin’s ministers are hand-picked stooges, such as Defense Minister Sergei Shoigu (not seen in public since March 11.) But there are complexities and probably conspiracies among the strong men (siloviki) in Putin’s entourage. At least two intelligence chiefs and the deputy head of the National Guard, the Rosgvardiya, are in trouble and being investigated. Putin’s foreign envoy on the environment, Anatoly Chubais, has fled to Turkey. Bloomberg reports that Bank of Russia Governor Elvira Nabiullina tried to quit after the invasion started, but Putin refused to allow it.

If top Russian officials care about their own future and that of their homeland, there is only one conclusion they can reach — that they should remove today’s hare-brained threat to Russia’s well-being and to global order.

Walter Clemens is Associate, Harvard University Davis Center for Russian and Eurasian Studies and Professor Emeritus of Political Science, Boston University. His books include “Baltic Independence and Russian Empire” and “Can Russia Change?”