The independence of action that Belarus’s dictator carved out for himself over three decades in power has gone. The country now does what the Kremlin tells it. 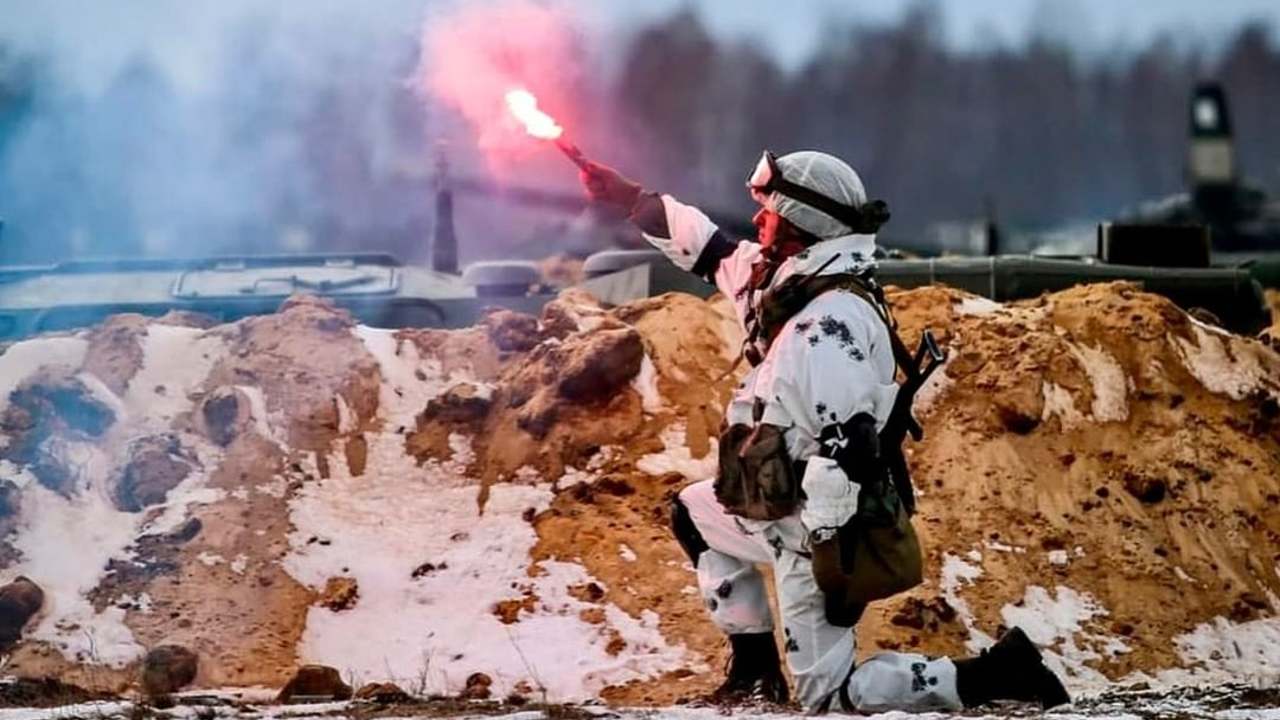 Photo: Belarusian and Russian units involved in checking the reaction forces of the Union State at the Brestsky training ground held a rally of an episode of practical actions. Credit: Belarusian Ministry of Defense via Instagram.

Joint exercises between Russia and Belarus kicked off a week early, giving NATO and the US more worries, as 30,000 Russian troops and convoys of military equipment flood into the country close to the Ukrainian border. This comes at a time of threats to the region unseen since the Cold War, from Putin’s build-up on Ukraine’s eastern borders, to the showdown with NATO, and warnings that Russia is preparing false flag operations to justify a further invasion.

For many years, Belarus’ leader Aliaksandr Lukashenka walked a fine line when dealing with Russia. He always made sure to assert Belarusian independence while keeping the Kremlin at arm’s length, even when meeting Putin in 2019 to discuss details of an integration roadmap for cooperation in several significant areas of the “Union State,” a 23-year-old entity that has generated more words than action. That all changed in 2020 after Lukashenka chose to retain power by locking up opponents and rigging the election. The battle to stay in the office involved heavy reliance on Russia to help silence protestors through mass incarceration, torture, and murder. Loans from Russia flowed, even as Western sanctions were imposed.

Assistance from the Kremlin comes at a high price, however, and in this case, the cost is Belarus’ independence. Russia has since increased its threats against Ukraine and Europe, while Lukashenka has been (at least publicly), more than happy to assist.

While Kremlin figures have insisted that they weren’t interested in annexing Belarus, events tell another story. “There is no talk of unification,” Putin’s press secretary Dmitri Peskov, said in an interview, adding that the deepest possible integration would be in the interests of both Russians and Belarusians. Outgoing Russian Ambassador to Minsk Dmitry Mezentsev told RBC TV that Moscow had no plans to create a unified army with Belarus. Yet the country’s leaders have spoken of a “common defense space” and the evermore frenetic rate of joint military activity on Belarusian territory, often involving sudden “joint exercises,” show this to be dissimulation.

There are more significant dangers brewing. Lukashenka has also said that he would welcome hosting Russian nuclear weapons. The US recently acknowledged these concerns and stated it this would require a response.

Lukashenka’s surrender to Putin is now almost complete. In December, seven years after Russia illegally annexed Crimea, he finally stated that Crimea was Russian territory, satisfying a key Kremlin expectation. Shortly afterward, the 67-year-old dictator followed up by stating that Ukraine must be “returned to the bosom of true faith,” and continued with a poorly coded signal to the Belarusian people of what was underway.

“I must tell you that this year will not be easy. The world will change in a serious way. The world will change in terms of uniting peoples and states in unions. It will not just be difficult for states like us to survive alone — it will be impossible,” he said. “That is why I have taken a tougher course to preserve our sovereignty and independence so that we can be a state. But we were in close contact with our closest friends and brothers.”

In a war that the Kremlin denies is coming, Lukashenka has already taken a side, stating: “If our country faces aggression, there will be hundreds of thousands of Russian soldiers here, who will defend this sacred land together with hundreds of thousands of Belarusians.” Quite how the ordinary Belarusian may respond to this new world is not clear. Their opinion is anyway not sought.

Russia’s newfound and seemingly untrammeled control over Belarus’s territory and leadership pose a grave threat to Ukraine, as well as, to NATO states including Poland and the Baltic states, which must now plan for a geographically and numerically expanded Russian presence on their borders. The head of NATO’s military committee said on February 7 that the alliance recognized the risk and might have to reinforce its presence in the region if Russian troops remain in Belarus.

The risk is not only military. Only last summer, Lukashenka hatched a destabilizing operation to use developing world migrants on the borders of Poland and Lithuania, causing a humanitarian crisis designed to threaten and punish NATO.

As Putin continues to pursue his dreams of restoring Soviet-era “greatness”, each territorial and leadership gain, from Belarus to Kazakhstan, presents new opportunities to expand Russia’s hybrid war against the West.