The Kremlin is using a variety of tactics to intimidate and exploit the people of the occupied zones. 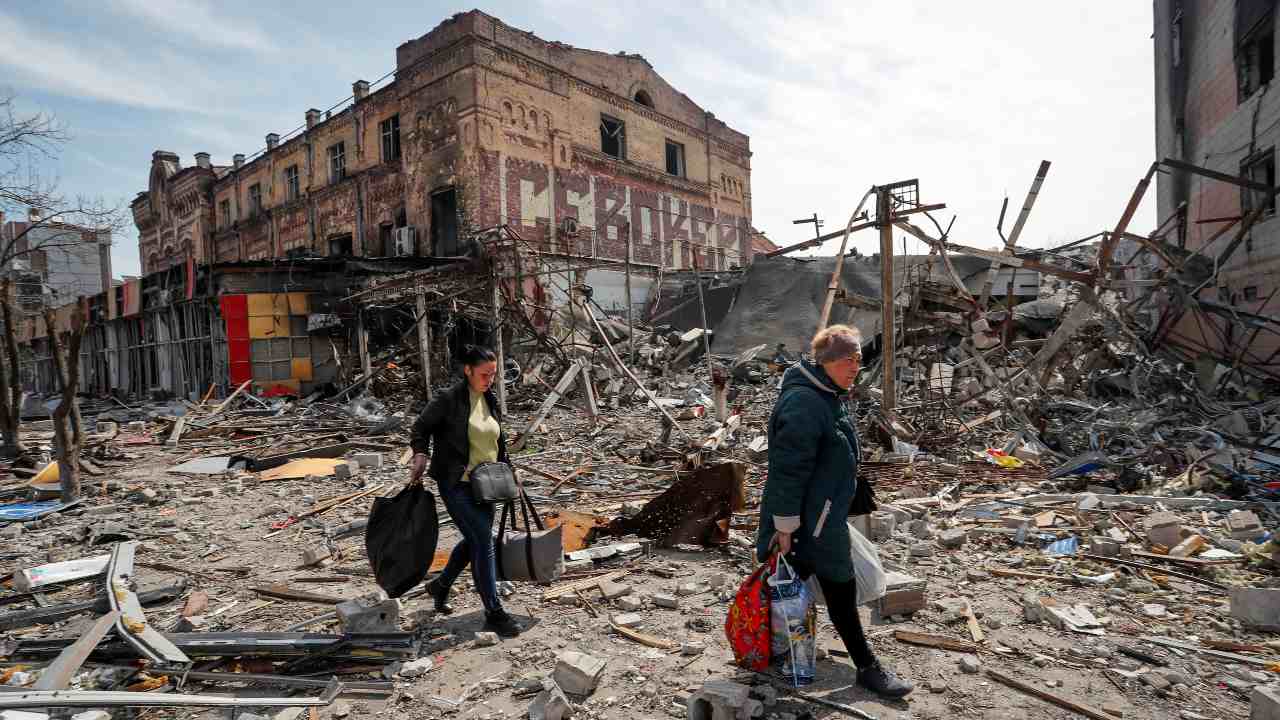 Photo: A Ukrainian territory defense soldier walks past the ruins of a building hit by shelling on the outskirt of the separatist region of Donetsk (Donbas). Donetsk(Donbas) region is under heavy attack, as Ukraine and Russian forces contest the area, amid the Russian full invasion of Ukraine started on February 24, the war that has killed numerous civilians and soldiers. Credit: Photo by Alex Chan Tsz Yuk / SOPA Images/Sipa USA.

Vladimir Putin told Duma deputies in July that Russia “hasn’t even started yet” in Ukraine. There was, as always, a welter of contradictory interpretations of his words, and as always no agreed conclusion. But in truth it makes very little difference what Putin says; his words are in his deeds.

There have been a spate of missile attacks this month on Ukrainian cities far from the frontline, as in Vinnitsa in mid-July. Some 25 people died, including children. Whether these strikes are designed to cause terror or hit a specific target, or whether they result from wayward missiles with dodgy technology, also matters very little. Any living thing, human or not, is a target for Russia, and has been since the all-out war began on February 24.

Russia’s propagandists make no secret of this when they speak to one another on primetime television shows. Back in May, Russian propagandists on the main political program of the country, Sunday Evening with Vladimir Solovyov, openly discussed tactics for taking Ukrainian cities.

During the discussion, invited experts talked about the example of the destroyed city of Mariupol, and bluntly advised that the preferred approach was to “will hit every person, every city dweller,” since “it is the morale inside the city that affects how long it will last.” To achieve this goal, propagandists even suggested developing some kind of ultrasonic weapon that “people could not withstand.”

Another tactic aimed at undermining Ukraine’s defenses are attempts to turn the inhabitants of the occupied regions against the central government in Kyiv.

One of the main methods here is, of course, control of propaganda. So in May, the media reported how Southern Bridgehead publications, which creates and distributes pro-Putin propaganda through YouTube, Telegram, and a website, had begun operations in Berdyansk, Kherson, and other occupied cities. Earlier, before the creation of a separate media outlet, eyewitnesses relayed how cars with screens broadcasting Kremlin propaganda drive around Mariupol and other cities captured by the Russians.

As Igor Semivolos, director of the Center for Middle East Studies in Kyiv notes, “the Russian military is increasing pressure on the population and trying to persuade those remaining in the region to cooperate,” hoping to exploit the sense of uncertainty that grips residents of occupied regions during wartime. The invaders make sure that teachers teach according to Russian programs, and doctors work directly under Russian control. In the Kherson region, a large number of cases of torture and looting of civilians are reported. “Russian forces have turned occupied areas of southern Ukraine into an abyss of fear and wild lawlessness,” Human Right Watch said in a report on July 22.

Ukrainians in the occupied zones are simply regarded as expendable by the Kremlin. Since 2014, Russia has been using the occupied Crimea and part of Donbas as a military base and as a springboard for military operations against Ukraine. This applies not only to strikes from Russian-controlled territories, but also to enlisting local residents to serve in the Russian army. Having suffered an estimated 20,000-25,000 dead and perhaps 60,000 wounded in Ukraine, Russia is desperate to find new sources of manpower without having to announce a general mobilization. The occupied territories and their poorer, ethnic minority regions like Buryatia and Dagestan have served this purpose, as have the Donbas and Crimea.

According to the representative of the Crimean Platform, Maria Tomac, Crimeans are being used by Russia “as manpower, as cannon fodder against their own people and their own country.”

Forced mobilization begins at the age of 18, he said, and is the responsibility of a dedicated office of the so-called Luhansk and Donetsk people’s republics, which is based in the Southern Military District and is paired with local commandant’s offices. The process is monitored by the Russian FSB.

There is almost no escape from this process. The personnel departments of universities and colleges are required to provide military registration and enlistment offices with all data on students, including their addresses. Lisyansky notes that students mobilized in such a way are barely armed but are sent to the immediate vicinity of the front line, for example, to dig trenches. Such work attracts Ukrainian attention and any resultant fire can alert the Russians to enemy positions.

Another favored tactic, in addition to mobilizing Ukrainians under occupation, is to strike at the rest of Ukraine from the territory seized by Russia. When Ukrainian forces strike back, the local population is involuntarily drawn into the logic of war, in which, regardless of which side attacked first, they find themselves under fire from their own government forces.

It has also been alleged on Ukrainian social media that if government forces fail to oblige, the Russians simply shell areas under their control, to make the point. In early June, Ukrainian media, citing social networks, reported that the shelling of several districts of Donetsk was carried out from Makiivka, a suburb that has been controlled by Russian troops since 2014. Under such circumstances, it would be unsurprising if at least some local people get used to associating with the enemy.