Newly liberated Kherson is under relentless shell fire, wounding, and killing civilians. Despite this, local people are united in wishing for a swift Russian defeat, writes Tetiana Bezruk. 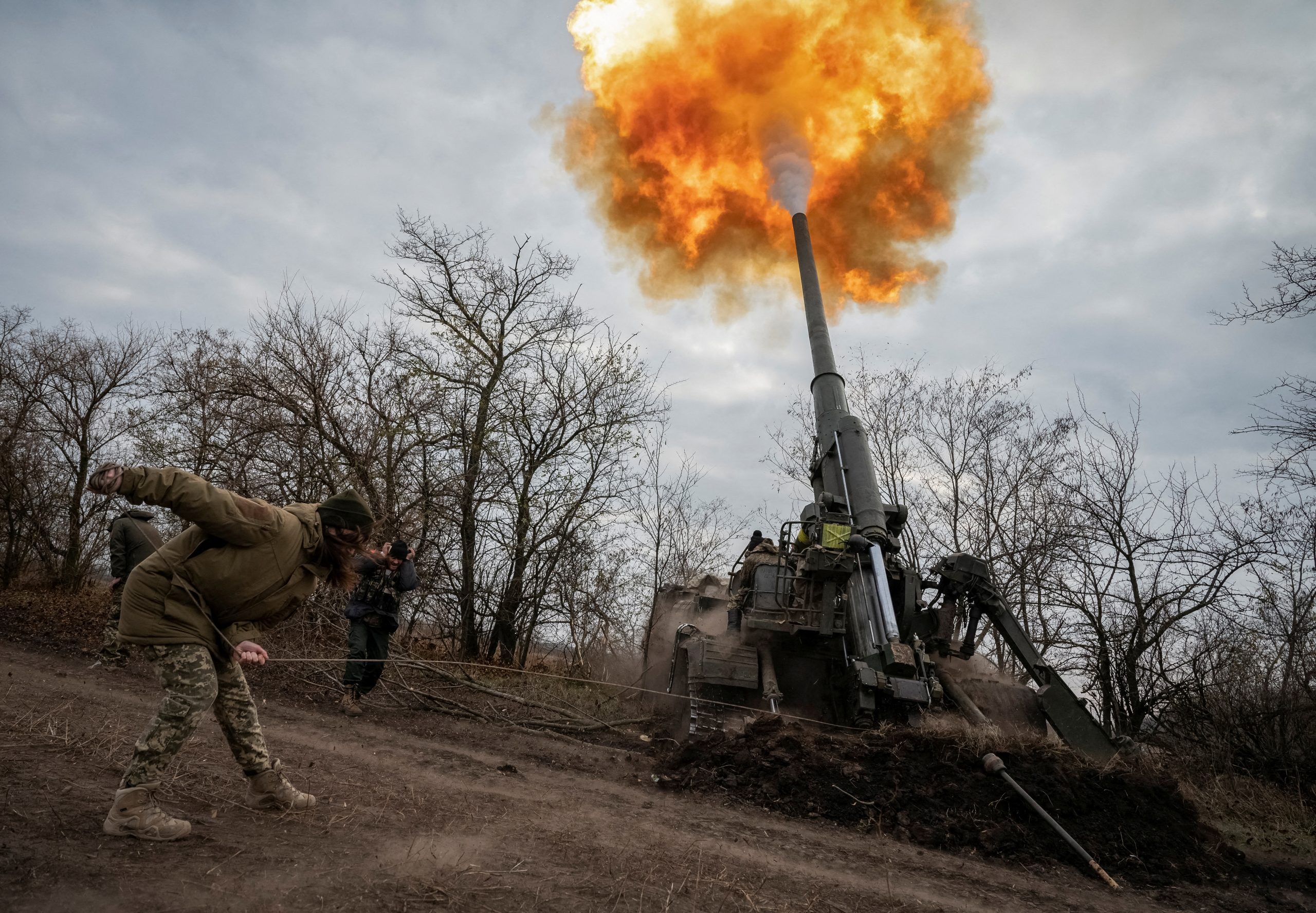 Photo: A Ukrainian servicewoman fires a 2S7 Pion self-propelled gun at a position, as Russia's attack on Ukraine continues, on a frontline in Kherson region, Ukraine November 9, 2022. Credit: REUTERS/Viacheslav Ratynskyi

It’s warm in the Kherson home of Valentyna and her daughter, Vika. Some come from the stove and some from the long-awaited chattering of Valentyna’s teenage grandchildren: Anna, Danylo, her younger brother, and Dmytro, the youngest of three, are gathered together for New Year’s Eve. But while the intimacy of family brings some joy, it’s impossible to deny the dampening of the festive spirit by attacks from the enemy on the River Dnipro’s far bank.

“The festive mood is just not there,” 39-year-old Vika says as she places a large bowl of homemade pizza dough next to the gas stove and covers it with a tea towel to help it rise. “I don’t feel like doing anything. We’ve got an artificial Christmas tree but haven’t even taken it out of the closet this year.”

Valentyna, 64, agrees. “I wish everything would return to the way it used to be, and we’d just be celebrating,” she says, as she holds Honey, a gray cat, in her arms.

Vika and her younger son arrived back in Kherson as soon as the city was liberated on November 11. Her husband tried to talk her out of it, fearing the city would come under fire from Russians entrenched to the south, across the Dnipro, but she said she was not afraid and wanted to return home. She could not wait to see her mother and her son Danylo, who had refused to move away and leave his grandma alone.

Vika had not been home since spring, when she moved to the relative safety of Odesa, and was shocked by the ruins left by the Russian army.

“Driving down the road between Mykolayiv and Kherson, I felt so much pain seeing all those piles of stone and rubble that used to be people’s homes,” she recalls. “We just kept driving in silence. None of my loved ones in the car with me said a single word. It felt as if I hadn’t been home for a decade. Deserted villages, no power, and only silence all around.”

Not everyone in Vika’s family lived to see them return. Her 91-year-old grandmother died during the occupation. She had witnessed the Holodomor, World War II, and then the Russian invasion of her hometown. She did not live to see Kherson’s liberation for the second time in her life.

Vika’s grandmother was Jewish, and when the city was occupied by the Germans in the previous century, she had been forced to flee. Her brother was lost for a time while they were trying to escape, and Vika’s great-grandmother ripped up her passport to avoid being shot. Her great-grandfather was killed.

“She’d tell us all those stories before this war, but we never really listened to them. It seemed so distant,” Vika says. “Now war is raging again. Grandma didn’t believe what was happening at first, she kept asking me about all the bangs and vehicles rumbling down the street.”

As Valentyna and Vika prepare the New Year’s Eve dinner, they pay little attention to the explosions outside. Dmytro, the youngest family member at just 11, is much more anxious about the bombardment. Whenever Vika runs errands downtown, her son calls repeatedly and asks when she’s coming back.

“And then he’ll say, ‘perhaps you could stay home, mama,’” Vika says. “I’ve never seen him so anxious since we returned to Kherson, with all these blasts all the time.”

The main wish Valentyna and Vika’s family made this New Year’s Eve was identical to the wish made by the entire nation: to defeat the Russians and drive them out of their country.

“And to see my son, who’s now serving in the Ukrainian army,” Valentyna adds. “We see each other so rarely.”

On the morning of January 1, an elderly married couple holding a small bag arrive at the hub for internally displaced people in Kherson. They live close to the Dnipro, and the Russians keep shelling their neighborhood from the other side. They have been sheltering in a basement and now want to move to the hub, which hosts people forced to leave their homes due to the attacks.

“I don’t know what to do. The basement odor is all over me,” the woman says. “We can’t wash there properly, we only wash our faces.”

“And the frost is going to hit soon,” her husband adds.

Anastasia, the hub coordinator, listens and then offers them a room, saying they will have to take the stairs to reach it.

“I have trouble walking up stairs. My knees hurt too much,” the woman says. “Could we sleep in the basement?”

“The basement is cold, and there are no beds there. And the rest of the rooms are occupied, I’m afraid,” Anastasia says. “If you do make it upstairs, though, you won’t have to come down that often.”

“We also have a son, as well as cats and dogs. We take care of our neighbors’ dogs, too. We make food for them in the basement.”

“Let’s do it this way,” Anastasia says. “You sit here and think about it. I’ll come back in a short while, and you tell me what you decide.”

When Anastasia leaves, the couple starts weighing up the pros and cons, trying to decide whether they should stay or return home.

The center where Anastasia and her husband Serhiy work started operating immediately after the Russians invaded the Kherson region and around 5,000 people have stayed there since it opened. They can sleep, eat, do laundry, and, in return, the coordinators ask them to help with cooking and cleaning. Local people heard about the initiative and offered to help. Some brought food, water, and kitchenware, while others asked what the center needed.

“A young woman contacted us after she saw our post on social media where we called on people to donate bedding,” Serhiy says. “She was a fashion designer and had a spare roll of fabric. We sent her the measurements and she sewed bedding sets for us.”

The hub helped people leave the city at a time when the 40-mile journey to Mykolayiv  — which took an hour before the war — was taking up to eight hours. They also set up daycare for families with children, where mothers helped teachers with a range of activities. In summer, the residents even made pickles for the winter. The hub functioned like a beehive where people helped each other, and everyone did something useful.

After Kherson was liberated, Anastasia took out a Ukrainian flag, which she had hidden behind the fridge, and hung it in the hall. Some residents left, but not everyone was able to leave and a core remained behind. Anastasia and Serhiy organized a New Year’s Eve party for them. They set up a Christmas tree, cooked a festive dinner, and prepared presents for the children. On the first day of 2023, everyone was back at work.

“My knees are torturing me,” the woman says when Anastasia returns to the couple waiting for her in the hall.

“I can only suggest that you try to walk upstairs to your room and just stay there,” Anastasia says, eager to offer whatever options she can so the couple are able to stay.

“They bomb us so heavily. There are 20 of us in the basement. We cut firewood by ourselves to keep the stove burning,” the woman says.

“We do, too. We’ve got our own boiler house. We cut everything we can for firewood.”

The couple is apparently still hesitating about what to do.

“We can call volunteers if you like, and they will evacuate you. There will be no shelling at least,” Anastasia says. “It might be easier for you elsewhere. I know it’s hard to pack all your life in a suitcase and leave.”

The husband and wife turn down her offer and go back home. Before they leave, Anastasia reminds them they can return any time, to take a shower or stay for longer. They’ll be looking forward to hosting them, she says.

Falling asleep and waking to the sound of explosions has become routine in Kherson. The blasts happen so often, it’s easier to identify the brief spells when there are none. The city’s residents want Russian forces to be pushed back as far as possible from their city, beyond artillery range.

Despite all the risks, many have chosen to stay in Kherson, and others to return to it, to buy mandarins in grocery stores, and to make costumes for New Year’s Eve parties, because first and foremost, this is their home.

Lida stands in the yard of her destroyed home. She wears a blue jacket, warm headscarf, and work gloves as she clears debris and shingles that have fallen from the roof. A clear, sunlit sky is visible where the ceiling used to be. There’s a gaping hole in the wall of the house, which Lida says was made by the Russians in the early days of the February invasion.

The 66-year-old lives in Posad-Pokrovske, a village 18 miles northwest of Kherson. During the fighting, it was in the gray zone, sandwiched between Ukrainian forces and the occupiers. In early March, Ukrainian soldiers helped the villagers evacuate. Lida took her passport, 1,000 hryvnias ($27), rubber boots, and a jacket. She moved in with relatives in the Lviv region.

“I lived in this house with my husband. He died in January, before the war,” she said. “We’d recently moved in and built a summer kitchen. We had everything. And now it’s all ruined.

“In my old age, I won’t have a home of my own; I’ll have to stay in someone else’s house,” Lida adds, and she starts to cry.

She about the destruction of her home when photographs arrived when she was still in Lviv. After Kherson’s liberation, she packed her few possessions and returned, but now has nowhere to live. With the roof gone, everything inside has been soaked by rain. All the blankets and pillows are wet, and a wardrobe and bookshelf are the only surviving pieces of furniture.

“For New Year’s Eve, I went to my son, who lives in a village just outside Kherson,” Lida says. “We spent the night in the basement. The shelling was so heavy the whole house was shaking. We sheltered in the basement in February when the war broke out — and we’re still there.”

Barely any building in Lida’s street has survived intact. The community center, the school, the café, the pizza place, the central square — everything is ruined. Villagers have covered the roofs of some houses, those with surviving walls, with sheets of steel and polyethylene to try to keep out the weather. Packs of dogs roam the neighborhood. Some have owners, and others are strays, but the locals feed them regardless.

Life is slowly returning to Posad-Pokrovske, bringing the small joys of human life, like New Year’s Eve. The village is ruined, and this year there was no brightly lit, glistening Christmas tree in the central square. But the villagers have decorated a pine tree growing next to the village council building with blue-and-yellow ribbons — the colors of the Ukrainian flag. A symbol of defiance and hope amid the destruction.