A Western Strategy for Ukraine 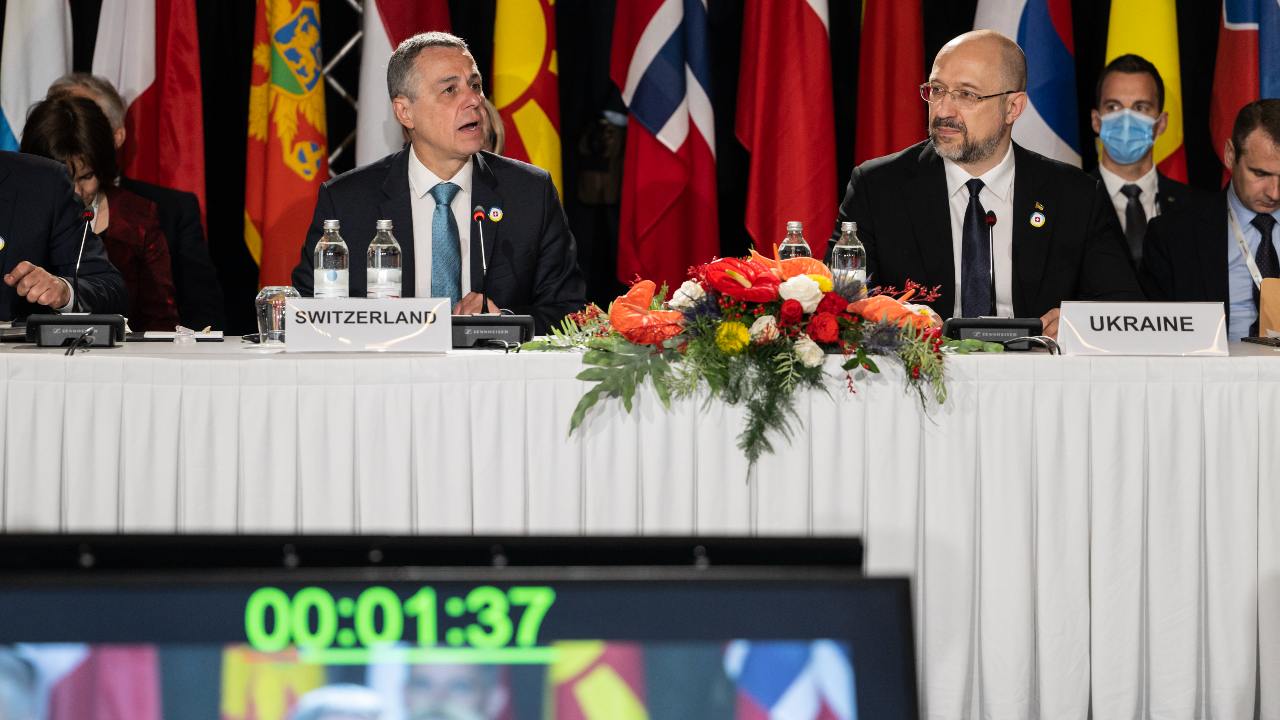 Photo: Swiss President Ignazio Cassis, Minister of Foreign Affairs, left, gives his national statement next to Ukrainian Prime Minister Denys Shmyhal, during the Ukraine Recovery Conference URC, Tuesday, July 5, 2022 in Lugano, Switzerland. The URC is organised to initiate the political process for the recovery of Ukraine after the attack of Russia to its territory. Credit: KEYSTONE/EDA/Alessandro della Valle

Of course, Ukraine must win the war. Yet even as considerable international attention is paid to Ukraine’s military requirements, relatively little is paid to the task of rebuilding and growing its economy, which is equally essential to victory.

Ukraine needs an economy that can outlast Russia’s invasion, provide government revenue, and sustain military defenses. Western nations (including the EU, United States, UK, Canada, and individual EU members) must urgently work with Ukraine — not only on macro-finance and government assistance programs, which themselves are lagging — but to put in place programs designed to stimulate private investment and sustainable economic growth.

No amount of government aid will ever be enough to build the Ukrainian economy and make it sustainable. No centralized control will ever create comfort for private investors. The goal should be to use government-provided resources and policy decisions in strategic ways that incentivize the private sector to invest, produce wealth and jobs, and steer the Ukrainian economy into the European Union (EU.)

Some refer to this as a “Marshall Plan” for Ukraine, and there are useful parallels. Perhaps the most defining trait of the Marshall Plan, as Secretary George C. Marshall himself conceived it, was just this: not merely distributing government aid, but reviving the private sector.

Time is of the Essence

More than six months after Russia launched its all-out invasion of Ukraine, the West has provided substantial funding to keep Ukraine’s public finances afloat. It has not been enough, has not arrived on time, and is not free of repayment terms. Yet without these funds, Ukraine would not have survived.

On economic recovery, however, there has been no action. There seems to be an implicit assumption that one must wait for the war to be over. That is wrong. No one knows how long the war will last, and Ukraine must build its strength now, to bolster its war effort, and to prevail while Russia’s economy is weakened by sanctions.

The micro-economy of Kyiv and western Ukraine is working quite well. Trucks are on the roads delivering goods. Shops, restaurants, and cafes are stocked and open. Those with paychecks are able to get back to a somewhat normal life. The population of Kyiv is back up to about 3 million (as compared with 3.5 million pre-February), and city tax revenues are at 85% of their pre-February levels. From a day-to-day perspective, despite the air raid sirens and the threat of missile strikes, the war seems mainly in the south and east, not in Ukraine west of Donbas and north of Kherson and Zaporizhzhia.

Much of this is artificially sustained. The government has substantially increased the number of people on government payrolls and is printing money to cover expenses. Several private enterprises are paying workers at least through the end of 2022, even though they no longer operate. A black economy is re-emerging (often in hard currencies) given the downward pressure on the hryvnia.

At a macro level, the Ukrainian economy is suffering even more. GDP is down by as much as 30%. Agriculture is shaky, as export capacity is only a fraction of the pre-war figure, some fields require de-mining and removal of unexploded ordnance, and unsold crops from last year are blocking storage sites needed by this year’s harvest. Many major industries have been damaged or shut down. All this has led to nearly a third of workers being without work (although some are still being paid by dedicated business leaders.) This is not sustainable.

State finances also face significant challenges. The central government runs a deficit of approximately €5bn ($5bn) per month. Most of the promised EU funding intended to narrow this gap has not been delivered. Moreover, even when paid, most of those funds will be in the form of loans, which will burden the Ukrainian economy for years to come.

On July 4-5, the Swiss Government, European Union, and Ukraine co-hosted the Lugano Ukraine Recovery Conference. President Volodymyr Zelelnskyy addressed the audience by video, and Prime Minister Denys Smygal and EU Commission President Ursula von der Leyen did so in person. America was mainly absent. While there was enormous goodwill toward Ukraine, the Lugano Declaration was merely a set of well-intended platitudes about transparency and good governance. It offered nothing in terms of specifics.

Nor was the positive sentiment enough to erase tremendous disconnects or to grasp the failure to appreciate the economic emergency, and the role of the private sector. The EU had promised Ukraine €9bn in budgetary support, which it has still (in August) failed to deliver. Ukraine meanwhile presented a vast, centralized, and government-driven National Recovery Plan — with dozens of working groups each staffed by dozens of people. The EU proposed a “platform” for Ukraine, bringing various stakeholders together, but nothing has materialized.

The Ukrainian concept seemed to be, “Give us the money, and we will decide how to spend it” – something which will never happen. The European message seemed to be, “We won’t give you money, but we will fund projects through the European Investment Bank.” The two sides were simply talking past each other, albeit with the best of intentions.

None of this was actually on point, as no amount of direct government funding and central direction can substitute for a genuine and robust private economy. And as there was no sense of urgency, nothing has happened since the July 4-5 conference. The most substantive idea at the gathering came from neither the EU nor Ukraine, but from the UK’s Foreign Secretary (and likely next prime minister) Liz Truss, who called for subsidized insurance premiums so City of London insurers would underwrite investors, who in turn would invest in Ukraine.

A three-fold structure is needed:

One thing must be clear from the outset: this is a two-way street. Rebooting Ukraine’s economy will require action by the Ukrainian government to build investor confidence in the rule of law, to pass legislation and implement reforms needed to align Ukraine’s economy with the EU, and to eliminate regulatory and bureaucratic obstacles to investment. Ukraine’s martial law economy must become decentralized again. There will never be a carte blanche fund for Ukraine. Western donors will not take the risk. Rather, Western donors should pay the private sector for risk mitigation, transition and transaction costs, and the financing of major infrastructure projects. Ukraine must make the necessary internal decisions to truly empower a private economy.

One possibility the United States should consider is substantially re-capitalizing the Western NIS Enterprise Fund (or perhaps establishing a new Ukraine Enterprise Fund) to provide investment capital for small- and medium-sized enterprises in Ukraine. This is a model that has worked successfully in the past to develop private enterprise in Central and East European states, and could work in Ukraine today.

Another mechanism would be to seize currently frozen Russian Central Bank assets in the West, estimated to total around $300bn. If seized, this enormous sum would immediately provide large amounts of capital for investment in Ukraine’s recovery. Lawyers will surely argue that such a seizure would create an unacceptable precedent for seizing sovereign assets. But one must also argue that Russia’s own unprovoked invasion and subsequent war crimes in Ukraine also create an unprecedented breach of the rules, which should disqualify them from benefitting from the normal protections of the international system that they are so flagrantly abusing.

From a military perspective, Ukraine will surely win the war — defending itself against Russian aggression and repelling Russian occupation forces. But to truly triumph, Ukraine must have a well-functioning economy. Western plans for arming Ukraine are now advancing at pace. We need an equal effort to reboot Ukraine’s economy.