A Special Tribunal for Ukraine

There is no time to lose in collecting and cataloging war crimes evidence in Ukraine. 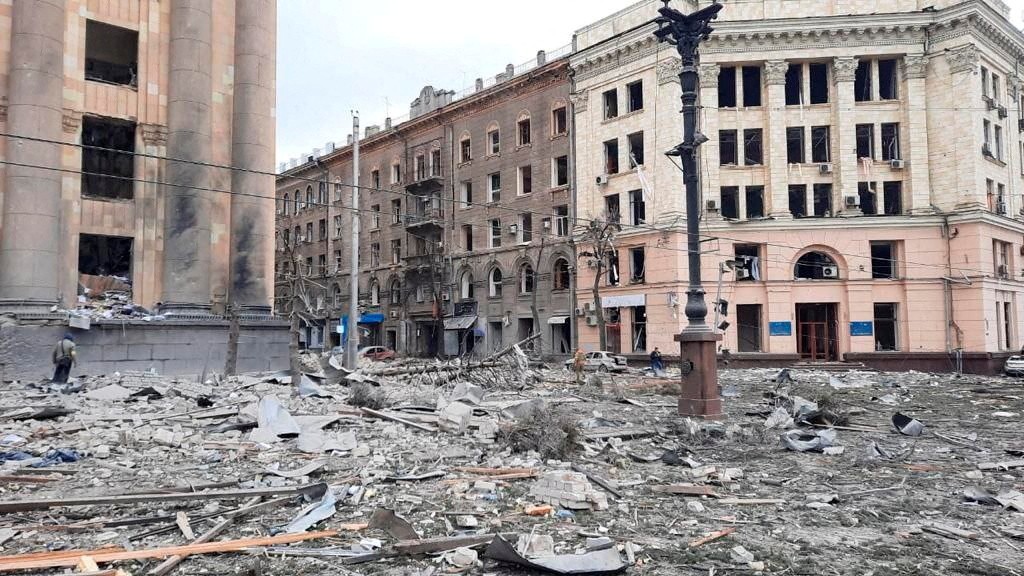 Photo: A view shows the area near the regional administration building, which was hit by a missile according to city officials, in Kharkiv, Ukraine, in this handout picture released March 1, 2022. Credit: Press Service of the Ukrainian State Emergency.

With each passing day, it becomes clearer that Putin’s aspiration for a relatively “clean” operation to topple the Ukrainian government in Kyiv has failed. All indications are that the Russian military is resorting to heavier firepower and more indiscriminate weapons systems, opening a phase of war that becomes more and more dangerous for the civilian population.

With this grim evolution, the three humanitarian crises that Ukraine faces will become more complex and urgent. Each has overlapping and unique challenges when it comes to international humanitarian and human rights law (IHHRL) that must be tracked and addressed in real-time.

There may be a temptation to begin the process of accountability for Russian aggression and alleged war crimes at a later stage. The international community could simply wait for the International Criminal Court (ICC), which has now initiated a preliminary investigation, to initiate a formal commission of inquiry. However, developing immediate accountability mechanisms and collecting evidence should be seen as an additional means to apply pressure on Russia and Belarus. Accountability is not only work done when the war is over. Putting Putin’s regime on notice that it will face prosecution can amplify the impact sanctions and military assistance might have on either slowing or ending the fighting.

In a call with Donald Tusk on February 26, President of the European People’s Party and former Prime Minister of Poland, Ukraine’s former President Petro Poroshenko called for the establishment of a dedicated tribunal.

The case for a special tribunal is now becoming clear. From February 27 there were signals that Russian tactics were changing and becoming more indiscriminate. Zelenskyy highlighted what is occurring in cities like Kharkiv, Kyiv, and Odesa and suggested an international tribunal.

We believe these calls must be answered immediately. Europe, the US, other allies, and international organizations must support the establishment of a Special Tribunal led by Ukrainians and, if and when possible, based in Ukraine. By setting up this tribunal, a watchlist of people who are under investigation can be publicized. This will enable the international community to isolate Russia still further, and clearly demonstrates that there is an intention to hold them accountable in an internationally transparent manner.

Furthermore, this watchlist must not be limited to Russia but should include Belarus, especially considering Lukashenka’s announcement that his country may officially enter the war, and evidence that Belarusian troops are present on Ukrainian soil. Establishing frameworks of accountability for these violations must be used as a supplementary tool to the sanctions regime that we have seen NATO and its allies take over the last few days, applying increasing pressure to Putin and his inner circle.

At Day 6 of the invasion (March 1), we have already witnessed violations of both Jus ad Bellum (the conditions under which a state may resort to war or the use of armed force) and Jus In Bello (the rules that regulate the conduct of parties engaged in armed conflict). Ukraine has taken the first step by filing suit against Russia at the International Court of Justice in The Hague. There have been attacks on a kindergarten and orphanage, civilian apartment blocks have been hit, an ambulance targeted, reports of butterfly mines dropped and cluster munitions used in civilian areas.

The Russian kleptocracy provides a unique opportunity to move the focus beyond Putin, and focus on accomplices to violations of IHHRL. Much like the identification of individuals to be targeted by sanctions, there must also be individuals targeted by investigations and prosecutions for their participation in, and complicity with, the gross violations continuing as long as Russia remains on sovereign Ukrainian territory.

However, the key to successfully establishing a Special Tribunal is starting evidence collection immediately. It has been reported that Ukraine’s ex-Deputy Prosecutor General and human rights groups have already started collecting the evidence of Russian war crimes and have set up an email address where individuals can send evidence. Other groups have also begun documenting IHL violations.

However, in light of the level of connectivity and the level of risk present for the civilian populations, there is an unprecedented complexity to evidence collection. The forensic architecture to support such a tribunal will be monumental and complicated, again underlining the need to begin this work today. Evidence delayed is evidence lost.

In our next post, we will discuss what steps should be taken now by the international community to develop the human and technical resources, organization, and evidentiary standards to start cataloging crime-scene Ukraine.

Joanna van der Merwe is a Fellow at the Center for European Policy Analysis (CEPA) and holds an MA from Leiden University. She conducted her research in collaboration with the Land Warfare Centre of the Netherlands Ministry of Defense.

Nathaniel A. Raymond is a Lecturer at the Jackson Institute for Global Affairs and holds a second appointment as a Lecturer of Epidemiology (Microbial Diseases) at the Yale School of Public Health. His research interests have focused on the human rights and human security implications of information communication technologies (ICTs) for vulnerable populations, particularly in the context of armed conflict. @nattyray11