A Small City, its T-34, and the Empire of Putin

The Estonian city of Narva has been the scene of sieges and destruction throughout its long history. Now, an old Soviet war memorial is threatening new unrest. 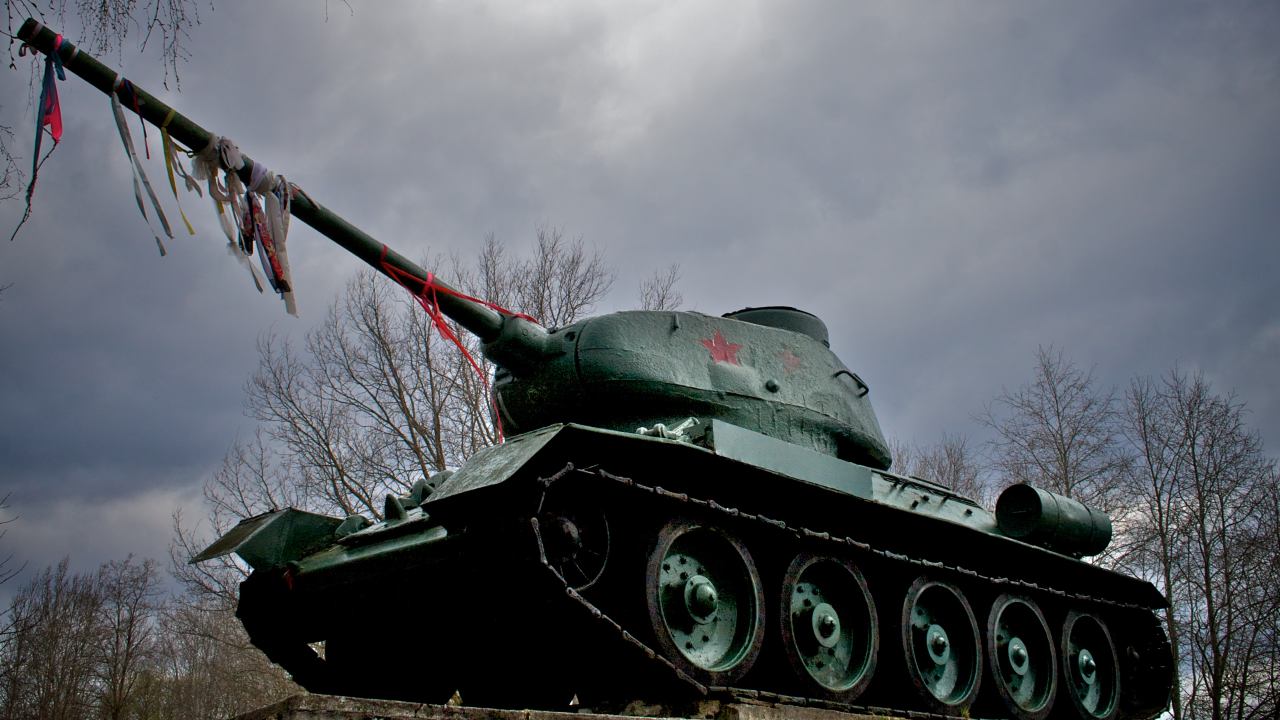 Photo: The Narva Tank Memorial was opened on May 9, 1970. A T-34-85 tank has been stationed at the location of a battle over crossing the Narva River by Soviet Red Army troops under General Fedyuninsky in February 1944. Credit: Tony Bowden

On a largely deserted stretch of road between the Estonian city of Narva and the nearby beach town of Narva-Jõesuu, a lone Soviet T-34 tank sits atop a stone pedestal, its gun facing towards Estonia. This mosquito-dense route runs parallel to the 80km-long (50 miles) Narva river – marking the narrow border between Estonia and Russia. It is so close that mobile phones occasionally attempt to connect to Russia’s cell network.

A mother carrying a wide-eyed toddler is visiting, and I ask her how important she considers the tank. “Of course, very,” she tells me in Russian before suspicion overcomes her and she edges away.

Despite its isolated location, this tank is at the center of a new row. The country’s key political figures have proposed everything from removing it completely, to installing a permanent exhibition nearby, documenting the horrors of Russia’s invasion of Ukraine. At the beginning of this week, its removal was finalized – although precisely when remains unclear.

“All of these monuments need to be removed before tensions or anxiety builds to the point that it has a much higher price already,” Estonian Prime Minister Kaja Kallas told reporters on Monday after visiting the city.

Debates surrounding the tank have been gathering momentum over the past month, and it has become a hot-button issue in Estonia over the past week. “The tank should be removed, there’s no question, and the faster, the better,” Isamaa chairman Helir-Valdor Seeder said last on August 2. “Naturally this should be done in a civil manner, but it definitely needs to be done and the tank removed.” Isamaa is a junior coalition partner in the Estonian government.

The following day, the formerly deserted thoroughfare was flooded with cars and visitors flocked to the tank in what Estonian state broadcaster ERR described as a “spontaneous gathering” after rumors spread on social media, according to Narva Mayor Katri Raik. “This was a call [to gather],” she said.

Narva’s population is overwhelmingly Russian; more than 90% of the population speak that language. Not all Russian speakers support the regime in Russia — many are sympathetic to Estonia’s position, but many are pro-Putin too, and the city clearly feels like it needs to address the concerns of outsiders; the city website has a feature entitled, “the Russian invasion of Ukraine is not a reason to cancel your trip to Narva!” and points out that the UK-led Estonia-based NATO battlegroup is present to guarantee security.

Even among Estonians, there is something of a rift over the Russian tank. The local mayor Katri Raik has emphasized the importance of the T-34 to local people and has been more resistant to its removal.

“Neither the city administration nor the city council is planning to move the tank,” Raik stated at the end of July. She emphasized that it was not the region’s biggest problem – pointing out that energy prices and employment were among more important concerns.

Many Narva residents trace their ancestry to Russians who arrived after the Soviet occupation of Estonia in 1944. To them, the tank symbolizes a part of their history and identity. “As Russians here, they represent those who liberated Estonia from the fascists [Nazis] and rebuilt Narva. So the tank is a small token of that identity and pride,” she told Estonian public broadcaster ERR.

Some 3,000 Narva residents have signed a petition in favor of holding a referendum on the tank, and locals had begun to think that its removal was pre-ordained.

“The decision was very, very hard, and even just half an hour before the prime minister’s arrival, it was not certain whether the decision would be forthcoming. There have been several days of negotiations, arguments,” Raik said on Tuesday.

There is now a widespread removal of Soviet monuments underway across Estonia and is raising passions. On the night of August 2, an excavator involved in the removal of a howitzer monument from Auvere Power Station, 25km west of Narva, was set ablaze. “There are significantly more emotional monuments that the state will deal with,” Interior Minister Lauri Läänemets said after that decision.

More recently, Estonia’s Ministry of Defense has decided to remove and reintern bodies from public war graves located in Rakvere, Võsu, Pärnu, Emmaste, and Nõo. While the remains of more than 30 people were found in Rakvere, recent excavations in excavations in Otepää, southern Estonia, revealed a mass Red Army grave to be completely empty, begging the question of how many more memorials are essentially Potemkin cemeteries.

Estonia is probably taking a harder and more urgent line on the vestiges of the Soviet occupation following Russia’s full-scale invasion of Ukraine. However, the process is not new — it has in the past made efforts to remove prominent symbols of Soviet occupation, such as the Bronze Soldier of Tallinn. That was relocated to a military cemetery in 2007 – resulting in a night of riots and violence likely instigated by Russian agitators.

The country appears keen to avoid any repeats of the violence, especially anything that can be described by Russian President Vladimir Putin’s propagandists as an attack on Narva’s Russian-speaking population. And Narva is certainly on Russia’s radar. In June, Putin told students at VDNKh that Peter the Great has stormed it in 1704, “returning and reinforcing” territories to the west of St. Petersburg.

“He was not taking away anything, he was returning. This is how it was. The areas around Lake Ladoga, where St. Petersburg was founded . . . from time immemorial, the Slavs lived there along with the Finno-Ugric peoples, and this territory was under Russia’s control,” he said.