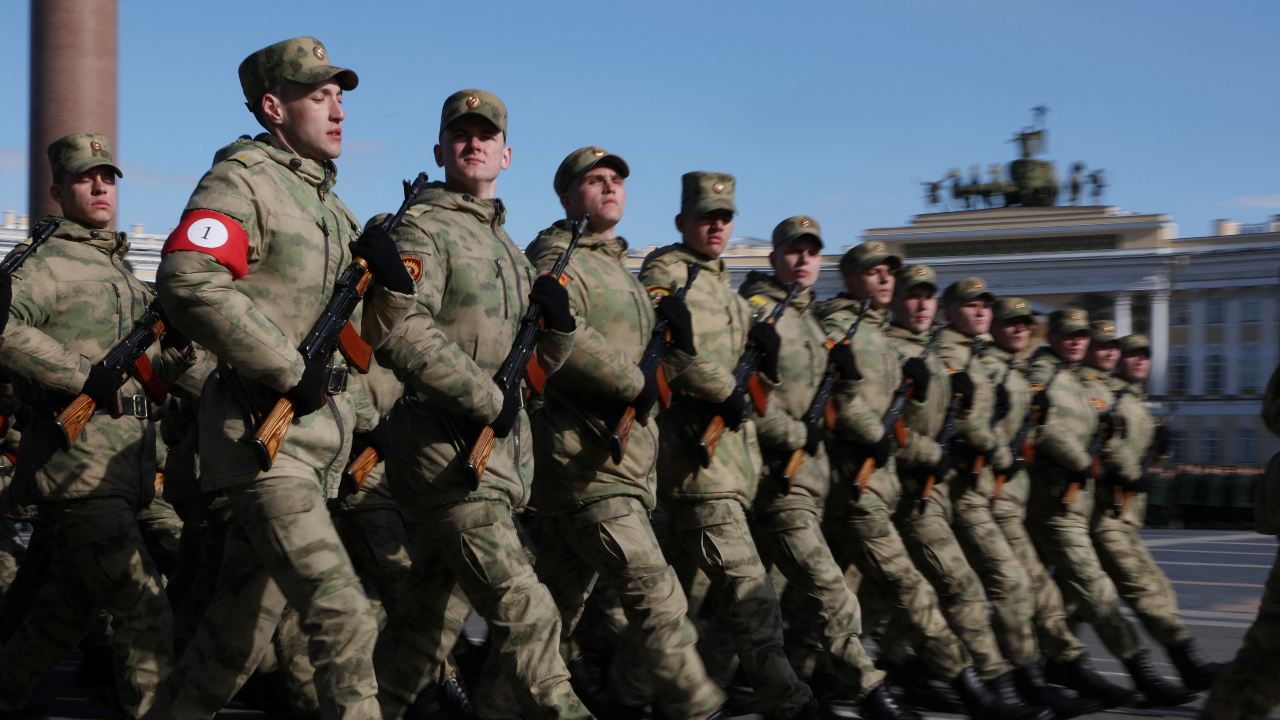 Photo: Russian service members take part in a rehearsal for the Victory Day parade, which marks the anniversary of the victory over Nazi Germany in World War Two, in Saint Petersburg, Russia April 28, 2022. Credit: REUTERS/Anton Vaganov

Dates should not matter very much in war, but May 9 is not a day like any other. For the men in the Kremlin, Victory Day is a chance to burnish their credentials as inheritors of what many Russians still see as their greatest generation — the men and women who paid the price in blood to defeat the Nazi invaders.

The link to Ukraine is inescapable. Not only is the Russian army suffering its costliest campaign since World War II, but it is also purportedly doing so to rid Ukraine of a Nazi regime (albeit led by a democratically elected Jewish man.)

As the burnished ranks of goosestepping Russian soldiers march across Red Square and lines of repainted high-tech munitions trundle across the cobblestones, we have to ask a question that probably would not have occurred to us last year — how for so many decades could we have overestimated the Russian armed forces? Is this, as some now say, a Potemkin military, better at polishing buttons that fighting wars?

If that is the case, then the problem is not just for Russians. It would mean that the West has badly misjudged its adversary. In fact, the West has been suffering from path dependency, an economic concept where past behavior sways current behavior, regardless of changing circumstances. In this case, NATO has been following a path laid during the Cold War. A war against the Soviets required NATO to lay out its defenses with mathematical precision to offset the inferiority in numbers.

For years, there has been a culture of believing USSR/Russian statements of capabilities and technical specifications because they fed our mathematical models. For NATO to create this art of scientific warfare, the adversary’s abilities had to become numbers. If a Soviet motorized rifle regiment was able to advance 20km in 24-hours, according to the Soviets, the numbers went into the NATO model. As we saw the USSR as highly capable, the Soviets were trapped in their unchallenged propaganda. And this fed back into Russian thinking —they couldn’t be that bad at war, since NATO feared them.

During the Cold War, NATO and Western countries created an art form of Warsaw Pact force estimation by assessing every aspect of the armed forces on the other side of the Iron Curtain. Through the 1970s and 1980s, the potential outcome of a future European major war was based on numbers leading to recommendations based on mathematical assessment. We could term this Fulda Gap economics.

The arrival of computers and computerized estimations had driven Defense Secretary (1961-68) Robert McNamara’s body count system in Vietnam, where the conflict became driven by a mathematical model. In the Public Broadcasting Service (PBS) documentary “The Vietnam War,” a former soldier stated: “If you can’t count what’s important, you make what you can count important.” A potential war in Europe became numbers as well.

Numbers give us certainty in an uncertain world where we seek to make inferences surrounded by a fog of information. For the last 60 years, numbers, call it data, have guided how the Western countries assessed first the Soviet Union and later the Russian Federation.

According to the US Army Field Manual 100-2-1 from 1984: “The overriding objective of the [Soviet] combined arms offensive is to rapidly turn tactical success into operational success by a well-orchestrated combination of massive fire, maneuver, and deep, violent strikes.”

Seen from the West, the Red Army was an able, well-integrated, and competent opponent able to rapidly launch joint offensive operations with no or little warning. Every Western soldier learned how the Soviets would fight by watching Red Army propaganda movies which projected a fast-moving armored onslaught that would either overrun any defense, or destroy the defending forces after encirclement.

The West was taken in by the Communist propaganda machine because these were the only movies showing the Soviet capabilities. We believed that Russian armored divisions would sweep across the open landscape, cross rivers and streams with ease when engineers unfolded pontoon bridges as the spearhead arrived, all surrounded by a symphony of well-orchestrated artillery and rocket fire and framed by the smoke trails of SU-24 ground attack aircraft in joint operations.

We looked at the Soviet, and now Russian, order of battle and drew mathematical inference – and ended up being wrong.

We missed discipline, leadership, coordination, trust, and the effects on troops and hardware, living in a culture of corruption and theft for decades. These factors could not be quantified and never made it to the model. Instead of passing the Portuguese border on day 75 of the assault, following the original Seven Day to Rhine model, the Russians in reality barely made it to the next postal code in Donbas.

Numbers have fooled before – it is not the first time. During 1938, after the Czechoslovak crisis, and in 1939, the Nazi-German foreign minister Joachim von Ribbentrop and the German High Command studied and measured the French and British war preparations and ability to mobilize. The Germans quantified assessment was that the allies were unable to successfully engage in a full-scale war at short notice. The Germans believed that the numbers revealed the reality — the allies would not go to war over Poland because they were not ready nor able. So Germany invaded Poland on September 1, 1939. Two days later, Britain and France declared war.

The quantifiable assessment was in fact correct, and lead to allied defeat and the withdrawal from Dunkirk, but the grander assessment was off and underestimated the British and French will to take on the fight. World War II left at least 50 million dead, half of Europe behind the Soviet Iron Curtain and (more happily) the destruction of the Nazis’ own regime. Britain’s willingness to fight to the end, its success in convincing the US to provide resources, and the allies’ subsequent successful struggle were never captured in the data. The German quantified assessment was a snapshot of the British and French war preparations in the summer of 1939 — nothing else.

The mathematical model contained no variable for troops heading back to Belarus to post stolen iPads and other loot, missing optics in combat vehicles sold long ago on the black market, or poor-quality tires bought by a corrupt army acquisition agency. We all got ensnared by the demons of Fulda Gap economics. There’s really no other explanation of how we could have overestimated the Russian Army to this degree.

Jan Kallberg, Ph.D., LL.M., has been focused on cyber for several years. He is a faculty member at New York University and George Washington University. His works have appeared in Joint Forces Quarterly, Strategic Studies Quarterly, IEEE Security & Privacy, and IEEE Access. Follow him at cyberdefense.com and @Cyberdefensecom.

The views are personal opinions and do not reflect any employer’s position.