A Fateful Step Towards Annexation 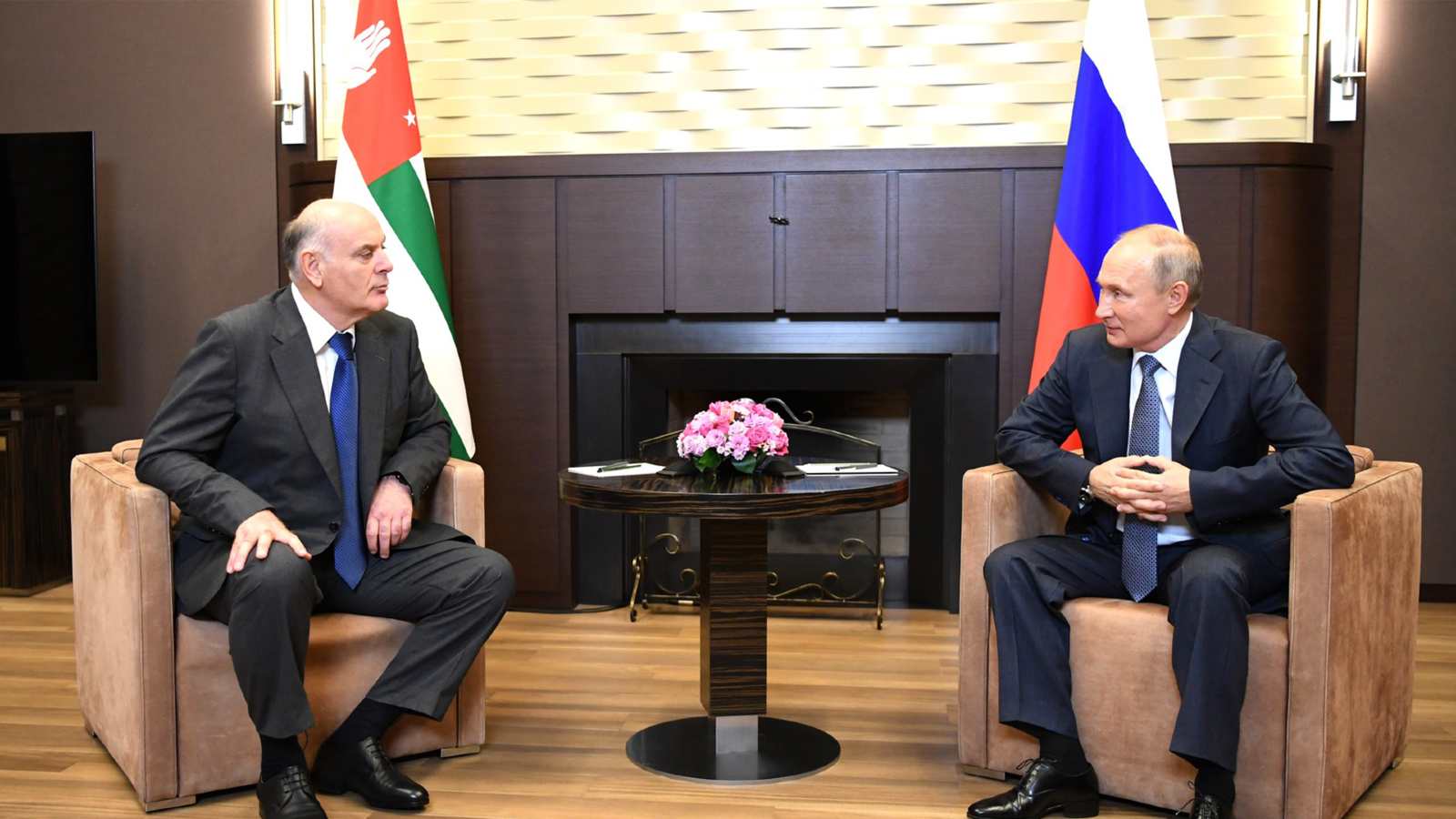 Photo: In Sochi, Vladimir Putin held talks with President of the Republic of Abkhazia Aslan Bzhania, who arrived in Russia on a working visit. November 12, 2020. Credit: Kremlin

It’s easy to lose sight of regional developments amid high political drama. The story of Alexei Navalny’s poisoning, flight to Germany, return, and arrest has dominated Russia coverage in the West. Specialists have also been focusing on the struggle over the Nord Stream 2 pipeline, and the fallout of the Nagorno-Karabakh War. Meanwhile, when in November of last year Georgia’s Russian-occupied region of Abkhazia signed a 46-point agreement to create a unified socio-economic space with Moscow, not many took note. While pitched as a move to alleviate the territory’s economic troubles, the program marks a huge step toward eventual annexation of Georgia’s region by Russia.

Multiple new provisions feature in the new document which were absent in the 2014 military agreement. The new pact creates various provisions for the sale of local real estate, among them a stipulation on dual citizenship allowing Russians to get Abkhaz passports. A whole range of laws will be introduced whereby Russian investors will be able to invest money into and buy majority shares in what still remains valuable in Abkhazia.

The latest agreement also proposes allowing the Russians to buy into Abkhazia’s energy sector. Additionally, the Abkhaz will make legislative and administrative amendments according to the Russian law in social, economic, health, and political spheres. There is also a stipulation on simplification of law procedures for Russian investors.

While this may end up giving a shot in the arm to a decrepit Abkhaz economy, the high level of harmonization with Russian laws lays the groundwork for a future merger with Russia. It is this dilemma between closer cooperation with Russia and deep fear of Russian intentions that will haunt the Abkhazian political class for the foreseeable future. Though officially the new “socio-economic” program does not involve a change in Abkhazia’s political status, Abkhaz elites fret they are heading down the path to eventual incorporation into Russia.

Criticism of the pact in Abkhazia forced the region’s leader Aslan Bzhania to forcefully deny that Abkhazia was losing any sovereignty. Instead, he emphasized the positive elements of the document, especially the re-opening of Sukhumi airport. Bzhania also cited Abkhazia’s chronic energy shortages and the acute need for Russian assistance as justification for the deal. Still, fears persist. After all, unlike South Ossetia, the other Russian-occupied region in Georgia, Abkhazia has never entertained the idea of merging with Russia.

But Russia is playing a long game. Pressure on Abkhazia has been building up gradually over the course of 2020. After the resignation of Moscow’s preferred client Raul Khajimba, Bzhania’s candidacy was regarded with suspicion by Kremlin officials. As a result, when he won, Bzhania had to make multiple visits to Moscow to kiss the ring, even as Russian funding continued to dry up amid the pandemic. The cost of resuming aid, it appears, was increasing economic harmonization and with the looming threat of eventual assimilation.

With Russian investments into the energy sector and land purchases, Abkhazia will slowly lose its last vestiges of de-facto independence. On an economic level, Abkhazia is far richer than South Ossetia. But controlling it has other virtues. Out of all the separatist regions Russia controls, Abkhazia is arguably the most strategically located. A passage from the North to the South Caucasus, the region is also famous for its harbors and military infrastructure. Control over it gives Russia capabilities to check NATO/EU expansion into the region.

Russian plans in Abkhazia should be also seen within the context of Russia’s push to solidify its presence in the South Caucasus, especially in the aftermath of events in Karabakh and Russia’s peacekeeping mission there. Economic inroads into Abkhazia also mean a further distancing of other potential players such as Tbilisi and the collective West.

Emil Avdaliani specializes in the wider Eurasia region with a particular focus on South Caucasus.