While there is no reason to think Chinese interest in Romania will wane, Romania is not prioritizing its relationship with China. 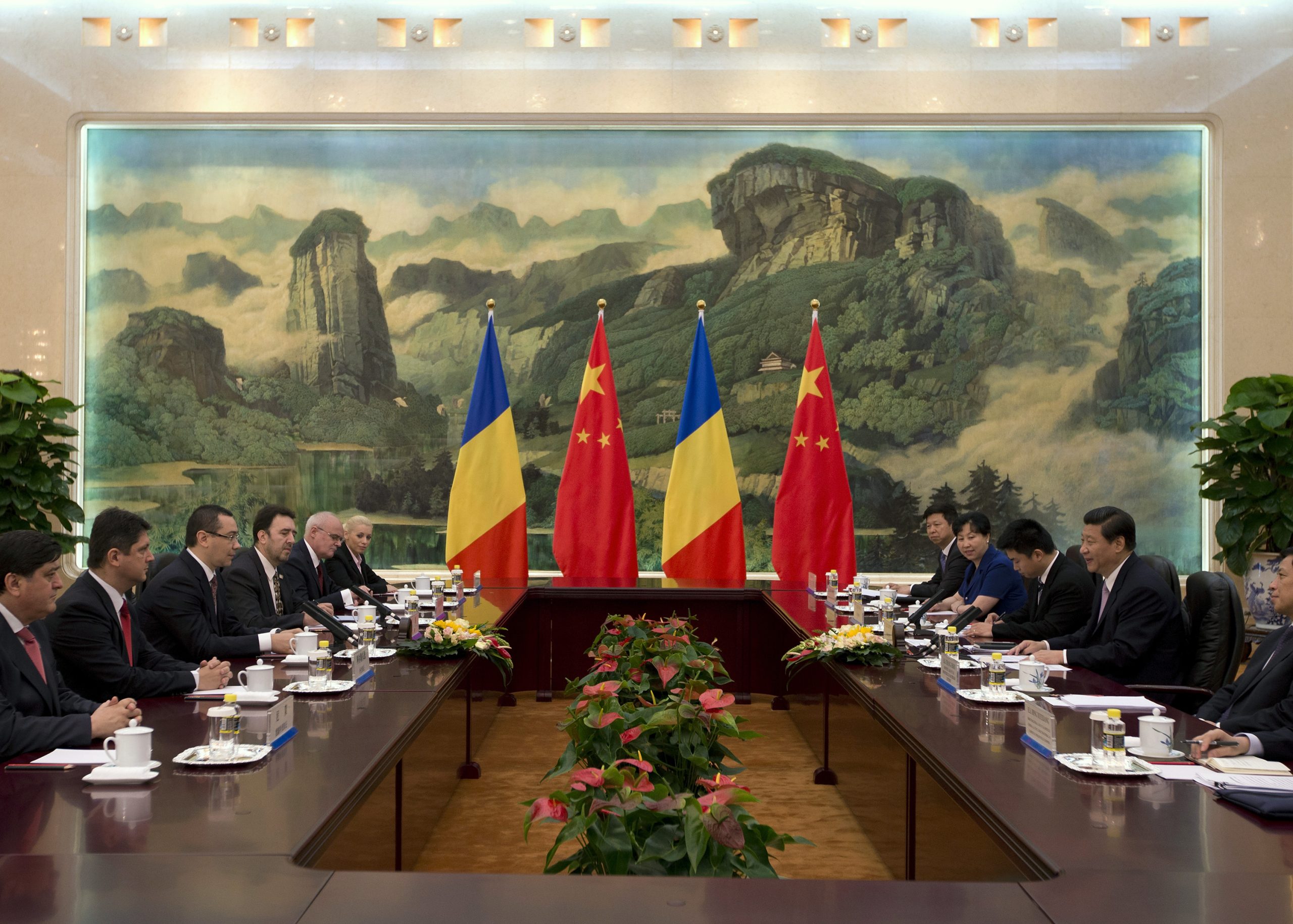 Romania does not seem key to China’s strategy for increasing its presence and influence in Europe, as it is not a large market for Chinese products, nor does it play an irreplaceable political role regionally or in Brussels. China’s interest is in large infrastructure projects won via influence within friendly segments of the elite (particularly within the Social-Democratic Party) rather than with the general population. Things appear to have changed since the pandemic, as worldwide criticism of China made Romania take more assertive positions in guarding itself against potentially malign Chinese influence. The impact of this change in attitude is still early to evaluate.

In recent history, the Chinese presence in Romania has been almost exclusively linked to infrastructure and energy projects as part of the Belt and Road Initiative, among them 1 high-speed railways, 5G technologies through Huawei, Constanța port management, nuclear power plants at Cernavodă, and conventional power plants at Tarnița and Turceni-Rovinari. Beijing prefers projects that are awarded not via tender but by direct negotiations with relevant political actors and that guarantee Chinese profits (and the possibility to transfer, as much as possible, the risk to the Romanian state). Even though Romania is part of the larger diplomatic objective of establishing Chinese influence in Central and Eastern Europe through the 16/17+1 format, 2 Beijing understands the short-term limits of its influence in a country that is a rather enthusiastic member of the EU and NATO and has a close strategic partnership with the US. For now, it seems content to stay present in Romania, as much as possible in a positive light and with contacts that will allow it to have more influence once circumstances permit.

China uses propaganda in Romania as part of its broader effort to subvert Western liberal democracy and present itself as a viable alternative. Notably, some Chinese propaganda appears to target Chinese party elites rather than a Romanian audience, with some texts simply bad at persuading anybody of anything. They are written in Communist parlance that would be immediately recognizable as such in Romania, a country with a relatively recent communist past itself. Even the younger generation should be able to detect the sharp style difference between the language of the host publication and the propaganda insertion.

China’s approach does not necessarily spring from malign intent. Beijing does not seem to want to directly subvert the state or sow discord, and its actions are relatively transparent. Indeed, China and Romania have had previous good relations and in some Chinese circles there still seems to be a belief that the two countries have a special relationship, 3 despite the changed political regime.

Whatever China’s intentions, its actions are likely to have harmful consequences in several ways. As Romania continues to struggle to stamp out fraud, and therefore to benefit from tightly controlled EU funds, Chinese investment, free of political strings, can seem attractive. 4 But it comes with serious economic obligations, and in a country with weak institutions, it can actually hurt the economy, as seen in parts of Africa and in the Balkans. 5 An influx of unsupervised investment is likely to come back to bite when it is time for the state to fulfill its financial obligations to China.

Beyond these hypotheticals, China uses its Confucius Institutes in Romania to build a small group of elites who are familiar with its language and culture but who are essentially apolitical and show little concern for human rights and democracy 6 in China. In these positions, they will inevitably push for a more relaxed stance on human rights abroad and, possibly in the longer term, at home. 7

Most of China’s propaganda operations in Romania fit within a greater narrative, peddled both locally and globally, that the Western system of democracy and liberal values is rotten, inefficient, and hypocritical. This grand narrative is naturally aligned with the narratives of other enemies of liberal democracy, such as Putin’s Russia or the global far-right movement.

Chinese propaganda and influence efforts fall into two categories: the newer broad-appeal strategies that target the entire population through major publications 8 and social media, and the more traditional elite-oriented strategies that aim to maintain contacts with politicians and educate cohorts of friendly China experts.

The Chinese Communist Party funds four Confucius Institutes that promote Chinese culture in a strongly propagandistic way and offer Chinese language diplomas and facilitate scholarships to China. The institutes are hosted by prestigious Romanian universities and, while no formal agreements enjoin hosts from raising subjects that are politically objectionable to the sponsor, the universities seem careful here nonetheless. 13  The institutes hold leverage through the funding they bring and through the scholarships the institute awards to students. This leads to some self-censorship and to friendly articles when scholars return home from visits to China.

Broad-appeal strategies: The most transparent channel of influence is the Chinese Embassy in Bucharest’s Facebook page, 14  which focuses on issues that are important to China, such as the status of Taiwan, 15 COVID-19 relief, 16 or projects within the Belt and Road Initiative. 17 Other posts could be labeled “Life in China,” lacking any explicit political content and often containing links to materials in English. They range from subjects of human interest, such as endearing pandas 18 or traditional instruments, 19 to more serious and politically adjacent subjects such as the popularity of mainland Chinese athletes in Hong Kong, 20 other Olympic news, 21 or news about the Chinese space program. 22 The page is not explicitly anti-Western, but it implicitly supports the case for the superiority of the Chinese system. Negative comments are promptly removed, even when written politely. 23 Posts tend to have fewer than a handful of (remaining) positive comments, sometimes from recurring commenters, who seem to be real people wanting to be noticed. 24

Relatively overt propaganda in Romania is also channeled through advertorials and content supplied by the Chinese international propaganda machine. The most visible channels are the mainstream newspaper Curierul Național and the Romanian-language section of China Radio International through its editor, Dan Tomozei, 25 a far-right sympathizer who lives in China.

These channels minimize the connection between China and the COVID-19 pandemic 26; praise Chinese generosity 27 to poorer countries; criticize Western democracy; promote the great achievements of the Chinese Communist apparatus 28 ; glorify the decisions of the Chinese Communist Party, often in an inauthentic, bureaucratic parlance 29 ; and implicitly deny the existence of human rights problems in China. Chinese propaganda does not respond to accusation but rather presents a positive counter-narrative, sometimes based on dubious facts. 30

In Curierul Național articles are grouped in a dedicated China series discreetly marked as advertorial. 31 The series is curated by CCTV+, the official Chinese television broadcaster abroad, and articles are signed as Radio China International. While the series began in August 2021, marking a new interest in mass communication from China, the author is openly assumed as Radio China International only from October 2021. As for the general information environment in Romania, however, an in-house research by GlobalFocus made for the purpose of this paper in December 2021 showed that, out of a sample of 99 examples of recent reporting on China, only 10 were positive.

China’s political influence seemed to reach a zenith during Victor Ponta’s time as prime minister from 2012 to 2015, 32 but afterward all the large projects negotiated with China under Ponta and, later, under Viorica Dancilă were dropped or at least suspended amid a strong pro-Western political consensus in Bucharest and an enduring strategic partnership with the US. Power plants and infrastructure plans were rendered null by legislation that implicitly blocks Chinese participation in public tenders 33 or by Romanian decisions to look for alternative solutions. 34 Romania has also adopted measures that would effectively block Huawei from selling 5G infrastructure 35 in the country. In the diplomatic arena, Romania is still a part of the 16/17+1 format but has shown little enthusiasm for actively participating in the meetings. 3

At this stage, China’s attempts to project influence in Romania primarily target elites. Through the Confucius Institutes, new generations of highly educated individuals are persuaded to focus on the economics of the Sino-Romanian relationship rather than the threat that the Chinese political model represents to democracy.

China can expect to wield little clout through its diaspora. Even though Chinese immigrants in Romania show more sympathy to their host country than those in neighboring countries show to theirs, 36 they have little meaningful contact with Romanian society due to persistent cultural and language barriers.

All in all, China continues to have little public visibility. Most opinion polls show that it is perceived as neither a major friend nor a major threat. 37

With its considerable media illiteracy and poor media consumption habits, the Romanian public can be easy prey for propaganda and manipulation, and the relative absence of a coordinated, state-led response heightens this vulnerability.

Targeted populations include students at the Confucius Institutes 38 and academics in the Romanian host universities. While they have limited influence themselves, they may at some point find an audience among the least educated, those who are media illiterate and unable to distinguish real news from propaganda. 39

Other potentially soft targets include corrupt Romanian politicians, 40 Romanian decision-makers who believe that funding opportunities through the EU and the World Bank are too complicated to allow for proper development at the local level, and “far-right”/ultraconservative groups that echo Beijing’s hostility to democracy and complaints that the West tries to force its values on other countries.

While there is no reason to think Chinese interest in Romania will wane, Romania is not prioritizing its relationship with China. Rather, the public and politicians are focused on supporting Ukraine and Ukrainian refugees.

Russia’s war in Ukraine is likely to encourage the public and the decision-makers to reconsider Romania’s allies. While China can promise incremental economic development, it cannot offer protection or support against wars and economic crises. The West can. Thus, politicians and influencers who might be otherwise favorable to authoritarian regimes have little space for engagement.

That said, after the war, development will displace crisis management, and China may decide to re-engage with Romania and CEE generally.