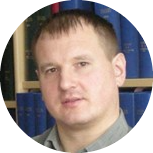 Oleksandr Moskalenko is an academic researcher focusing on European politics and is the current Chief of the International Department of the National Scientific Center of Ukraine and is an In-resident Fellow at the Center for European Policy Analysis (CEPA, Washington, DC).

He has concentrated on the political and security interactions within the EU-Ukraine-Russia triangle, with a focus on areas contested between the EU and Russia. He worked as an associate professor and senior lecturer at universities across Ukraine on the topics of EU-Ukraine relations, EU law, and international law. He has multiple degrees including a Ph.D. in European Law (2017), from the University of Turku in Finland, a Ph.D. in International Law (2006) from the Institute of Legislation of the Parliament of Ukraine in Kyiv, and a Master of Law (LL.M.) (2001) from National Law Academy of Ukraine in Kharkiv.