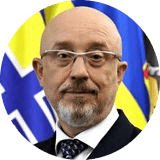 Previously, he served as a member of the Reformation Team for the Decentralization, Local Government and Regional Policy of the Ministry of Regional Development, Construction, and Communal Services of Ukraine and advisor to the Kyiv City Mayor.

In March 2020, Oleksii Reznikov was appointed Deputy Prime Minister, Minister for Reintegration of the Temporarily Occupied Territories of Ukraine.