Grains of Hope and Risk in the Black Sea

There are numerous barriers to be overcome before Ukrainian grain flows freely to world markets. 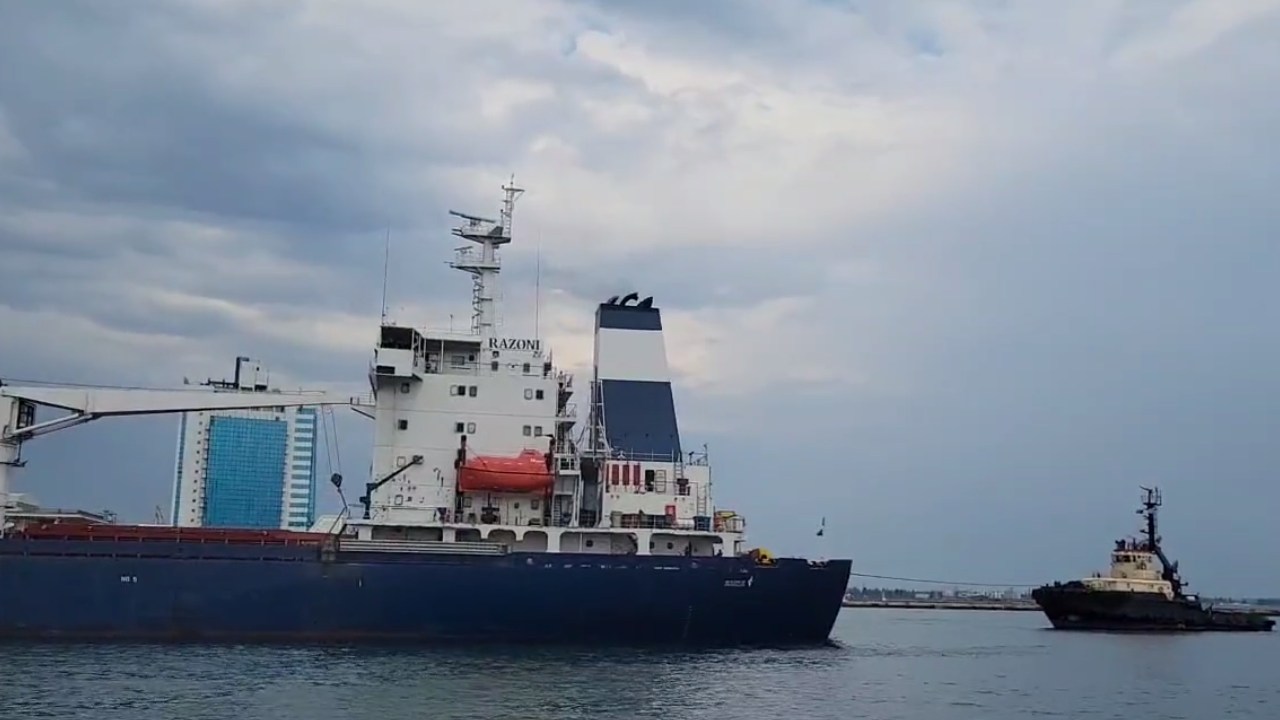 When the first ship carrying Ukrainian cereal since Russia’s full-scale invasion and blockade left Odesa port on August 1, media and many politicians praised the deal allowing the partial opening of the country’s ports. However, the Istanbul grain deal is a highly risky operation, both strategically and logistically, with many loopholes that still need to be addressed. It is notable that the Ukrainian Navy used very cautious language, stating that this initial shipment was just a test.

The so-called grain deal allowing the export by sea of Ukrainian cereals to the world market was signed in Istanbul on July 22. Less than 24 hours later, the Russian navy fired missiles at the docks in Odesa, immediately raising questions about the seriousness of the Russian commitment. It was more than a week before the bulk carrier m/v Razoni finally left Odesa’s docks.

Ukraine’s ports were badly affected by Russian naval action even before the full-scale invasion on February 24. Using the pretext of so-called exercises, territorial waters were de facto closed to navigation for safety reasons, forcing the Ukrainian authorities to arrange an emergency navigation route. Since March, all ports and territorial waters have been closed, with dozens of ships moored. Many sit idly near docks, loaded with grains they are unable to deliver to the world’s poor. Ukraine produces 10% of the world’s wheat and 12% of its barley. Without those supplies, prices have soared.

It is perhaps too widely assumed that the problem is now solved.

Firstly, there is the question of Russian motivation. Despite the good offices of the World Food Programme, the United Nations Secretary General, and the government of Turkey, this is not a formal treaty, leaving plenty of room for misinterpretation and open abuse (like the missile attack.)

Russia is Ukraine’s main competitor in the grain market. So, blocking the Black Sea ports, in addition to the strategic advantage, also has a commercial motive. Higher prices for cereals have allowed Russian companies to earn more, which is important in times of sanctions. It also allowed Russian sellers to take Ukraine’s traditional buyers. Such attempts are known to have been made in Egypt, Turkey, and Lebanon. Moreover, by promising to supply grains to governments worried by the likelihood of popular uprisings, Russia is also reaping political leverage from a crisis that it created.

The Kremlin is also using the agreement to demonstrate to the Middle East and Africa that it was willing to listen to developing world nations and negotiate an outcome for their benefit. It allows it to claim that Russia had not created the food crisis. This was clearly seen during Foreign Minister Sergey Lavrov’s visit to Africa in the last week of July.

The Kremlin also bargained for other benefits. The European Union (EU) excluded grain deals from its banking sanctions and in addition, the deputy prime minister of the Russian Federation, Andrey Belousov, and United Nations Secretary General António Guterres signed an additional memorandum to promote Russian grain on the world markets. While the Istanbul Initiative lasts up to 120 days and its text is public, this memorandum lasts for three years. Its terms are unknown.

So what about operational risks? The first comes from the agreement’s text itself, which states: “The parties will not undertake any attacks against merchant vessels and other civilian vessels and port facilities engaged in this initiative.”

Ukraine and other countries read this to mean the ports of Odesa, Chernomorsk, and Yuzhnyy (those three mentioned in the Initiative, but excluding other important ports such as Mykolaiv and Kherson). The Russian side then argued that what they meant was only those facilities physically involved in the loading of the ships (that is, two to three berths and nearby infrastructure.) As the Russians well know, a possible military threat to nearby berths will discourage shipowners (and their insurers) to send their ships into port.

The second challenge is mines, both coastal mines laid by the Ukrainian navy and around 400 drifting sea mines released by the Russian side in the spring. Demining is not envisaged by the Initiative. Grain carriers will be accompanied by regular tugs. The document says: “Should demining be required, a minesweeper of another country, agreed by all Parties, shall sweep the approaches to the Ukrainian ports.”

This is thus an option, not an obligation, despite the regularity with which mines are found near the shores of Ukraine and Romania. The second question is which navy will fulfill the role of  “another country”, since minesweepers are among the naval vessels to which Turkey closed access to the Black Sea at the beginning of the war, under the Montreux Convention. Bulgaria and Romania have limited capabilities but also as NATO states, would probably not be acceptable to Russia.

Moreover, regular Russian strikes from the territory of Crimea or the Caspian against Ukraine, whereby missiles fly over the Odesa region, bring additional threats since the best point of interception is over the sea. Who will take responsibility if any incident occurs?

Next, although the agreement does not limit the types of ships, just the types of goods to be exported (grain, related foodstuff, and fertilizers), the options are in fact limited. Within the last decade, many cereals have begun to be exported in containers. But the supervision procedure envisaged in Turkish waters under the agreement, states that inspectors need to have free access to the goods, making containers impractical. For such goods, the option will continue to be the hard-pressed road and rail systems.

The ships now leaving Odesa are those which have been moored since February and which were bottled up by the blockade. However, there is no information about the readiness of the shipowners to send further vessels to Odesa, as many will be nervous lest the security situation deteriorates. To this, one can add the problems of manning and insurance. Ships’ crews stranded off the Ukrainian coast were evacuated, leaving just a handful of sailors to maintain security. Shipowners will now need to find those ready to sail regardless of the risk. Moreover, Ukraine used to be one of the main suppliers of sailors for the shipping industry, but men aged 18-60 are not allowed to leave the country during wartime, limiting the options for the minimum safe manning of the ships.

Insurance companies also have not been in a hurry to guarantee such passages. Back in February, they established war-zone fees for Ukrainian waters, but as military activities continued, they have been hesitant to take any risks at all. Lloyds of London brokers said on July 29 that they would now offer some coverage, but a single Russian attack could alter the situation in a moment.

It was a happy sight to see the Razoni sail from Odesa, carrying its cargo of grain and hope for a better future.

But the world would be well advised to delay its celebrations. The complete absence of trust between the parties may be amplified at any moment by numerous technical difficulties. The Istanbul Initiative will not solve the whole problem of Ukraine’s ports blockade, either in terms of other goods and imports or in terms of capacity, as Mykolaiv and Kherson ports remain blocked.

For now, we can relish the moment. At least some relief is on the way for as long as Russia sticks to its promises. Unfortunately, its record in this most important of international principles is dreadful.

Hanna Shelest PhD is a Non-resident Senior Fellow with the Transatlantic Defense and Security program at the Center for European Policy Analysis (CEPA). She is the Director of Security Programmes at the Foreign Policy Council “Ukrainian Prism” and Editor-in-chief at UA: Ukraine Analytica. Before this, she served for more than 10 years as a Senior Researcher at the National Institute for Strategic Studies under the President of Ukraine, Odesa Branch.