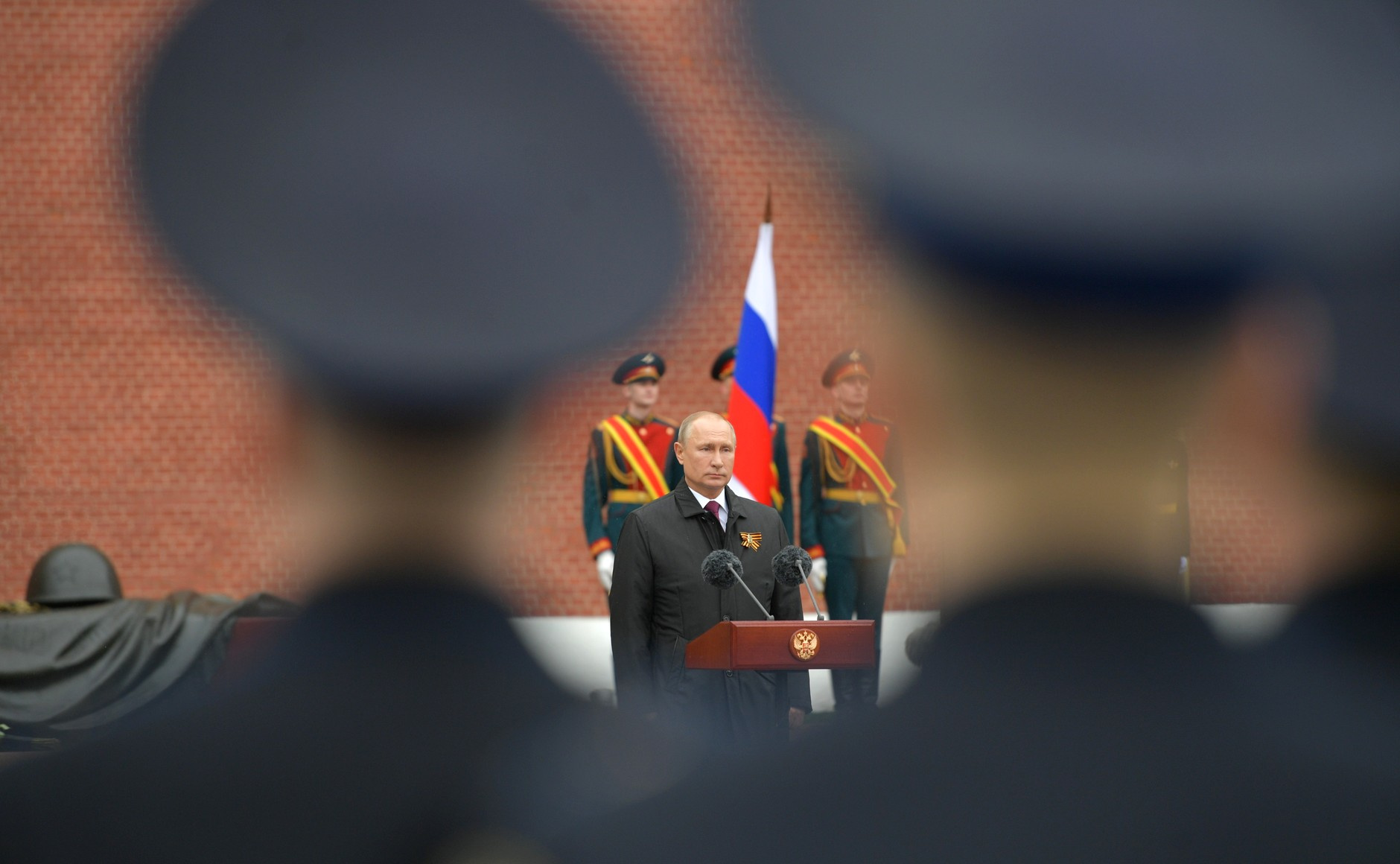 The subdued Victory Day celebrations in Russia this weekend were an apt metaphor for the state of Vladimir Putin’s propaganda machine as it struggles with a global pandemic.

No military parade on Red Square. No columns of soldiers and veterans. No World War II-vintage Red Army vehicles. And no modern military hardware to showcase for the world.

But May 9 did feature fireworks, a flyover by fighter jets in Moscow, and a subdued speech by Vladimir Putin. Russian State television did broadcast a video of last year’s parade.

For the first time in Putin’s rule, Moscow was quiet and subdued on Victory Day, a holiday the Russian historian Andrey Degtyanov has called “a cult of instant patriotism.” The Kremlin had bigger-than-usual plans for the festivities this year, in the run-up to the planned April 22 referendum on constitutional amendments that would keep the president in power until 2036. The parade was supposed to be a mobilization opportunity, a legitimization ritual, and a bread-and-circuses extravaganza, adding a huge exclamation point to Putin’s certain victory.

Writing on the eve of the holiday the political commentator Aleksandr Golts noted that “the coronavirus pandemic erased the authorities’ grandiose plans.” With both the referendum and the parade postponed due to covid-19, Golts added that “this time, each of us was left alone with our victory.”

The more Russians are left alone to deal with a pandemic their rulers appear incapable of addressing, the less they believe the Kremlin’s hype and the more their discontent is becoming manifest. Recent opinion polls show that just 41 percent of Russians are satisfied with their leaders’ handling of the coronavirus outbreak. A poll released on May 6 by the independent Levada Center showed Putin’s approval rating falling to the lowest level of his 20-year rule.

That the Putin regime is now facing a crisis that it cannot gaslight, it cannot bully, and it cannot bribe became abundantly evident just days after Russia awoke from its scaled-back Victory Day weekend. Shortly before Putin announced on May 11 that he was easing the national lockdown, health officials announced 11,656 new coronavirus infections in a single day. That’s a one-day record for Russia and a day-on-day increase of 5.5 percent. On May 11, Russia also surpassed Italy and Germany to become the country with the third-highest number of covid-19 cases in the world, after the United States and Spain.

Russian officials had long been boasting that despite a rapidly rising infection rate the mortality rate was low (about 13 deaths per million people, which is significantly below the world average of 36). But data released on May 8 by the Moscow city government called this into question. The data showed that 1,700 more people died in the Russian capital in April 2020 than the five-year average for that month from the years 2014-2019.

This suggests that the death toll in Moscow is significantly higher than the officially reported 642 — possibly almost three times higher, Tatiana Mikhailova, a senior researcher at the Presidential Academy of National Economy and Public Administration in Moscow, told the New York Times.

Democratic countries have a decidedly mixed record in handling the novel coronavirus pandemic, but the record among authoritarian regimes such as Alexander Lukashenko’s Belarus and Putin’s Russia has been almost universally bad. This is clear to anybody paying attention. It would have taken more than a military parade to hide it.

Photo: “75th anniversary of Victory” by the President of Russia under CC BY 4.0.