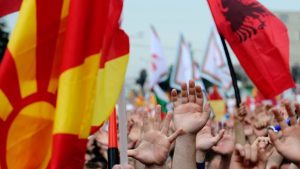 Photo: Protesters waving Macedonian and Albanian flags raise their hands during an anti-government demonstration in Skopje, Macedonia, May 17, 2015. Tens of thousands of protesters took to the streets of Macedonia’s capital on Sunday, waving Macedonian and Albanian flags in a dramatic display of ethnic unity against a government on the ropes after months of damaging wire-tap revelations. Credit: REUTERS/Ognen Teofilovski