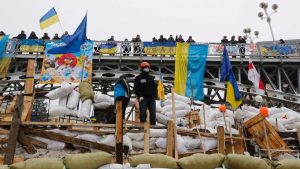 Photo: Demonstrators gather at a barricade near Independence Square where pro-European integration protesters are holding a rally in central Kiev, December 12, 2013. Ukrainian protesters stood their ground after a sweep by riot police and their leaders dismissed an offer of talks from a president they say must quit for favouring ties with Russia over the European Union. Credit: REUTERS/Alexander Demianchuk.