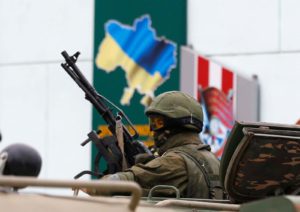 An armed serviceman looks out from a Russian army vehicle outside a Ukrainian border guard post in the Crimean town of Balaclava March 1, 2014. Ukraine accused Russia on Saturday of sending thousands of extra troops to Crimea and placed its military in the area on high alert as the Black Sea peninsula appeared to slip beyond Kiev’s control.