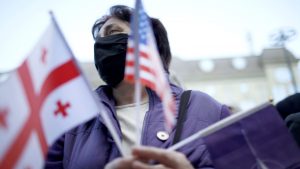 TBILISI, GEORGIA – NOVEMBER 1, 2020: A woman holds Georgian, US and NATO flags as she takes part in a protest against the results of the 2020 Georgian parliamentary election held by supporters of Georgian opposition parties outside the offices of the Georgian Parliament in Rustaveli Avenue. With votes from 97% of polling stations counted, the ruling Georgian Dream-Democratic Georgia Party has won 48% of the vote. David Mdzinarishvili/TASS.No use Russia.