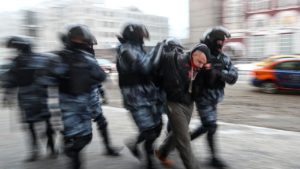 Riot police officers detain a participant in an unauthorized rally in support of Russian opposition activist Alexei Navalny in Komsomolskaya Square. In connection with calls for protests, pedestrian movement and public transport have been restricted in central Moscow. Access to several stations of the Moscow Metro has been temporarily closed, with trains passing without stopping. Valery Sharifulin/TASS.